Analysis of the Tax Cuts and Jobs Act

The Tax Cuts and Jobs Act has worked its way through Congress and is now awaiting final passage by the House and Senate. TPC has updated its comparison chart to show how the TCJA from the conference committee would compare against current law.

The Tax Policy Center has released distributional estimates of the conference agreement for the Tax Cuts and Jobs Act as filed on December 15, 2017. We find the bill would reduce taxes on average for all income groups in both 2018 and 2025. In general, higher income households receive larger average tax cuts as a percentage of after-tax income, with the largest cuts as a share of income going to taxpayers in the 95th to 99th percentiles of the income distribution. On average, in 2027 taxes would change little for lower- and middle-income groups and decrease for higher-income groups. Compared to current law, 5 percent of taxpayers would pay more tax in 2018, 9 percent in 2025, and 53 percent in 2027. 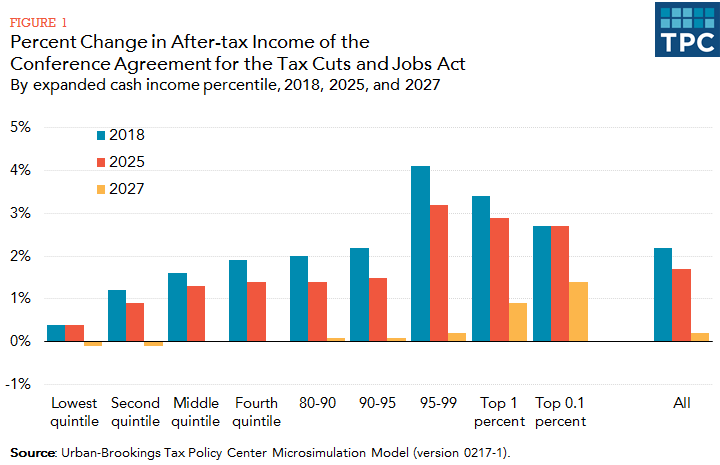 The Tax Policy Center has also released an analysis of the macroeconomic effects of the Tax Cuts and Jobs Act as passed by Congress. We find the legislation would boost US gross domestic product (GDP) 0.8 percent in 2018 and would have little effect on GDP in 2027 or 2037. The resulting increase in taxable incomes would reduce the revenue loss arising from the legislation by $186 billion from 2018 to 2027 (around 13 percent). Because most of the individual provisions expire after 2025, we expect deficits (not including interest costs) would decline by $415 billion from 2028 to 2037, and macroeconomic feedback would boost the deficit savings by $3 billion over that interval. Including macroeconomic effects and interest costs, the legislation is projected to increase debt as a share of GDP over 5 percentage points in 2027 to 97 percent of GDP, and almost 4 percentage points in 2037 to 117 percent of GDP.

Links to our most recent analyses and detailed tables are below. To brush up on some tax policy basics, or to refer to our previous analyses, see our Prepping for the 2017 Tax Reform Debate collection page.

Conference Agreement for the Tax Cuts and Jobs Act

Macroeconomic Analysis of the Tax Cuts And Jobs Act

Effects of the Tax Cuts and Jobs Act on Representative Families