The new bill introduced by the House Ways and Means Committee would significantly downsize the mortgage interest deduction.  Although this is sure to cause controversy, it is definitely time to address this old-fashioned approach to subsidizing housing.  The new bill is a good start in this direction, but we can, and should, go farther.

Currently, people who itemize their deductions can deduct interest payments on the first $1 million of outstanding mortgage loan principal for a primary or secondary home and on the interest for up to $100,000 of home equity debt.

The House GOP bill would not repeal those deductions outright, but would limit their use and value in a number of ways.  The proposed increase in the standard deduction and the elimination of other itemized deductions would greatly reduce the share of households who take the deduction.  The plan would reduce the cap on loan principal eligible for the deduction to $500,000 for new loans and limit it to the taxpayer’s primary residence. The deductions for interest on loans for second homes or home equity loans would be repealed.  This would further reduce the number of itemizers. In addition, the proposed reduction in several marginal tax rates would reduce the value of deductions for many.

First, let’s be clear: The mortgage interest deduction does not raise home ownership rates much, if at all. Countries like Canada, the United Kingdom, and Australia have no subsidies for mortgage debt yet their home ownership rates are slightly higher than ours. Many new U.S. homeowners do not itemize or are in the 15 percent bracket or lower, so the mortgage interest deduction provides little or no current benefit to them anyway.

Instead, the deduction encourages the construction of larger, more expensive houses, which, in turn, leads to higher energy costs, urban sprawl, and fewer investment funds available for business.  By encouraging people to finance homes with too much debt, the deduction increased the likelihood of people defaulting when housing prices fell in the financial crisis, thus contributing to the depth of the Great Recession. 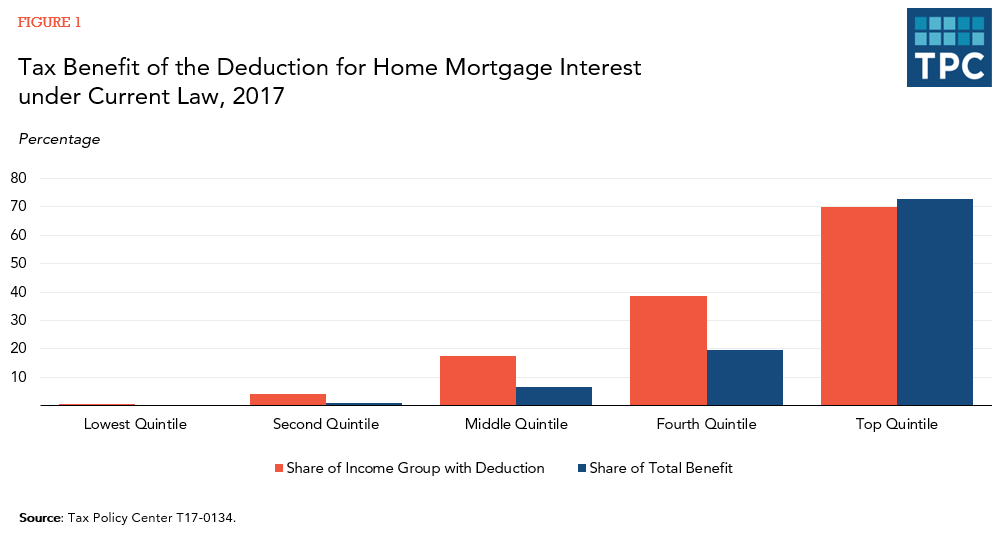 And it is expensive.  It will reduce revenues by about $60 billion in 2017 and roughly $900 billion over the next decade under current law, even after taking into account how investors would change their portfolios if it were eliminated.

The House GOP proposals would significantly curtail the deduction.  But why not just get rid of it entirely?  For example, the deduction could be phased out over the next 20 years and the value of deductible interest could be reduced by 5 percent per year.

But even if policymakers felt they had to do something explicitly to encourage home ownership, maintaining the deduction is still not the answer.  Instead, they could replace the deduction with a one-time refundable tax credit of $10,000 for each of the two million first-time homeowners each year.  This would encourage homeownership, not home indebtedness. At a cost of $20 billion per year, it would be far less expensive, far more progressive, and far more effective in boosting homeownership rates than the current deduction.