Comparing Estimates of the Macroeconomic Effects of Tax Policy: Growth Rates vs. Levels

In recent weeks, we have seen many different estimates of how the Tax Cuts and Jobs Act (TCJA) would affect the US economy.  These projections may sound similar at first: They all express the effects in tenths of a percent. But they measure very different effects and tell dramatically different stories about how the TCJA would affect the Gross Domestic Product (GDP). 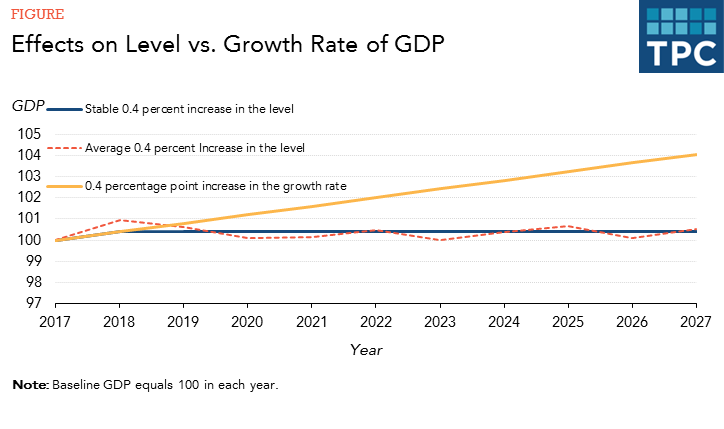 The Tax Policy Center (TPC) estimates how tax changes would affect the level of output for each year. Take the TPC analysis of the House version of the TCJA. TPC estimated that if that law is enacted, GDP would be 0.3 percent higher in 2027 than under current law. That means that if GDP were projected to be 100 in 2027 under current law, the TCJA would boost economic output to 100.3. The analysts at the Penn Wharton Budget Model and the Tax Foundation present their estimates in the same way.

By comparison, the congressional Joint Committee on Taxation has presented the change in the average level of GDP over 2018-2027. JCT estimates that the House bill would raise the level of GDP “by 0.7 percent on average over the ten-year budget window.” So if GDP averaged 100 over 2018-2027 under current law, JCT projects it would average 100.7 under the House TCJA.

Although JCT does not present year-by-year estimates of the effect on GDP, their revenue estimates suggest that the increase in the GDP level would be roughly constant: The economy would increase by about 0.7 percent in the first year but stay around that amount above baseline for each year over the next decade. Importantly, that pattern implies that, after the initial boost in output, the growth rate would be the same as under current law.

However, just knowing the average 0.7 percent change in the level of GDP does not say anything about the pattern of effects. In fact, GDP could be considerably more than 0.7 percent higher in 2027, or it could even be unchanged.  For example, GDP may not change at all from projected levels in the first year, but be 1.4 percent higher by the tenth year (GDP would increase from 100 to 101.4). The average increase over the 10 years still would be 0.7 percent (and GDP would average 100.7 over the period).  Or, the economy could have an immediate growth spurt, say 1.4 percent in the first year, followed by a steady decline to the current projected level in 2027. The average would still be 0.7 percent over the decade but the economy would look very different.

By contrast, the administration and tax cut advocates in Congress often estimate the effects of the TCJA in a very different way: They talk about effects on average growth rates rather than levels. For example, Senate Majority Leader Mitch McConnell (R-KY), Senator Susan Collins (R-Maine), and others have cited an estimate that if the tax bill raised the average growth rate of GDP by 0.4 percent per year, the TCJA would generate enough new revenue that it would pay for itself.

So while the 0.4 percent growth rate effect might look similar to the 0.3 percent level effect TPC projects for 2027, it actually is more than ten times as large. Similarly, while this 0.4 percent annual growth estimate might look smaller than JCT’s 0.7 percent average increase in the level of GDP, it almost certainly implies much higher level of output in 2027 than the JCT estimate.

The lesson is: Be very careful about whether estimated economic effects refer to an impact on the level of GDP or the growth rate of GDP. The numbers might look similar, but they tell very different stories about how the TCJA would affect the economy.