The Senate’s last-minute decision to preserve the corporate alternative minimum tax (AMT) has drawn strong opposition from business and its advocates. Its fate now lies with House and Senate negotiators who are trying resolve differences between the two versions of the Tax Cuts and Jobs Act (TCJA). As you watch this ongoing debate, keep in mind that different industries are affected very differently by the current corporate AMT.

According to the most recent IRS data, firms paid $4.2 billion in corporate AMT in 2013. That is a tiny fraction of the $293 billion in total corporate income tax liability that year, after foreign tax and other credits. Currently, the corporate AMT is heavily concentrated in the insurance, finance, and mining industries. The following table shows how sectors of the economy fare under the current minimum tax. 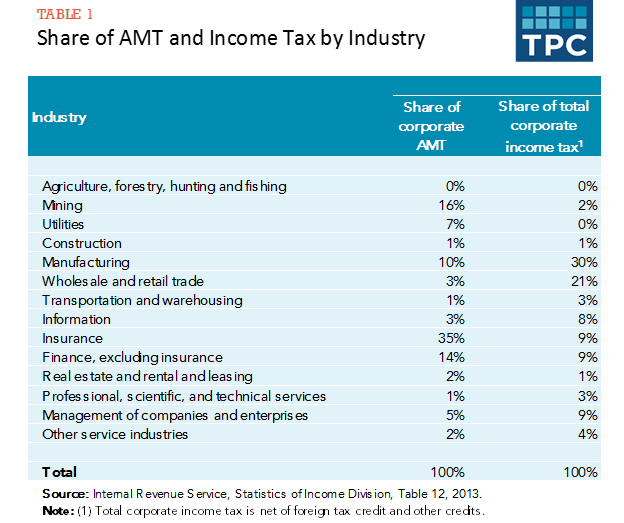 Combined with the many other corporate tax changes in the TCJA, a retained AMT at a 20 percent rate could affect industries very differently from the current version.

The Joint Committee on Taxation estimates that the corporate AMT would raise only an additional $40 billion over 10 years in the Senate bill. However, others assert the provision would raise several times that much and could effectively eliminate popular incentives like the research and experimentation (R&E) tax credit. They say it could also undo much of the bill’s effort to shift to a territorial tax system by disallowing the deduction US corporations could claim on dividends paid by their foreign subsidiaries.