President Trump and House Republicans promised families a significant increase in the Child Tax Credit (CTC). The House Ways & Means Committee’s Tax Cuts and Jobs Act (TCJA) expands the CTC but, because of other changes in the tax treatment of families with children, many low to moderate income households may get little or no tax cut in 2018 compared to current law and may actually face tax increases by 2027.

The changes in the proposal are complicated and combine to affect different families in very different and often idiosyncratic ways. Relative to current law, among those who use the standard deduction:

Not many low- and middle-income families itemize deductions under current law, but those that do are more likely to face a tax increase under the TCJA.

Here’s a brief summary of the bill:

Increasing the nonrefundable portion of the tax credit to $1,600 would reduce taxes, relative to current law, by up to $600 per child for families who already receive the maximum $1,000 credit per child. But, families who benefit from the refundable portion of the credit will benefit less. For starters, the refundable portion (the amount of credit in excess of income taxes owed) increases by only $100 in 2018. (The $1,000 limit for refundability is indexed for inflation in $100 increments starting in 2018, resulting in a $1,100 maximum refundable credit in that year). Second, 10 million children with working parents receive less than the full CTC because their household earnings are too low to generate the full amount of the refundable child tax credit under current law. None of them would benefit from the CTC increase, unless their earnings increase.

Moderate-income families with children would receive, on average, substantial tax cuts relative to current law in 2018. Before accounting for tax credits, families with one child would owe about the same amount of tax under the TCJA and current law. The higher standard deduction in the TCJA would roughly offset the lost personal exemptions. Families with two children would typically have a larger pre-credit tax liability under the TCJA. However, the new family tax credit for taxpayers and spouses would mostly offset those new taxes and allow families to benefit from the higher CTC. 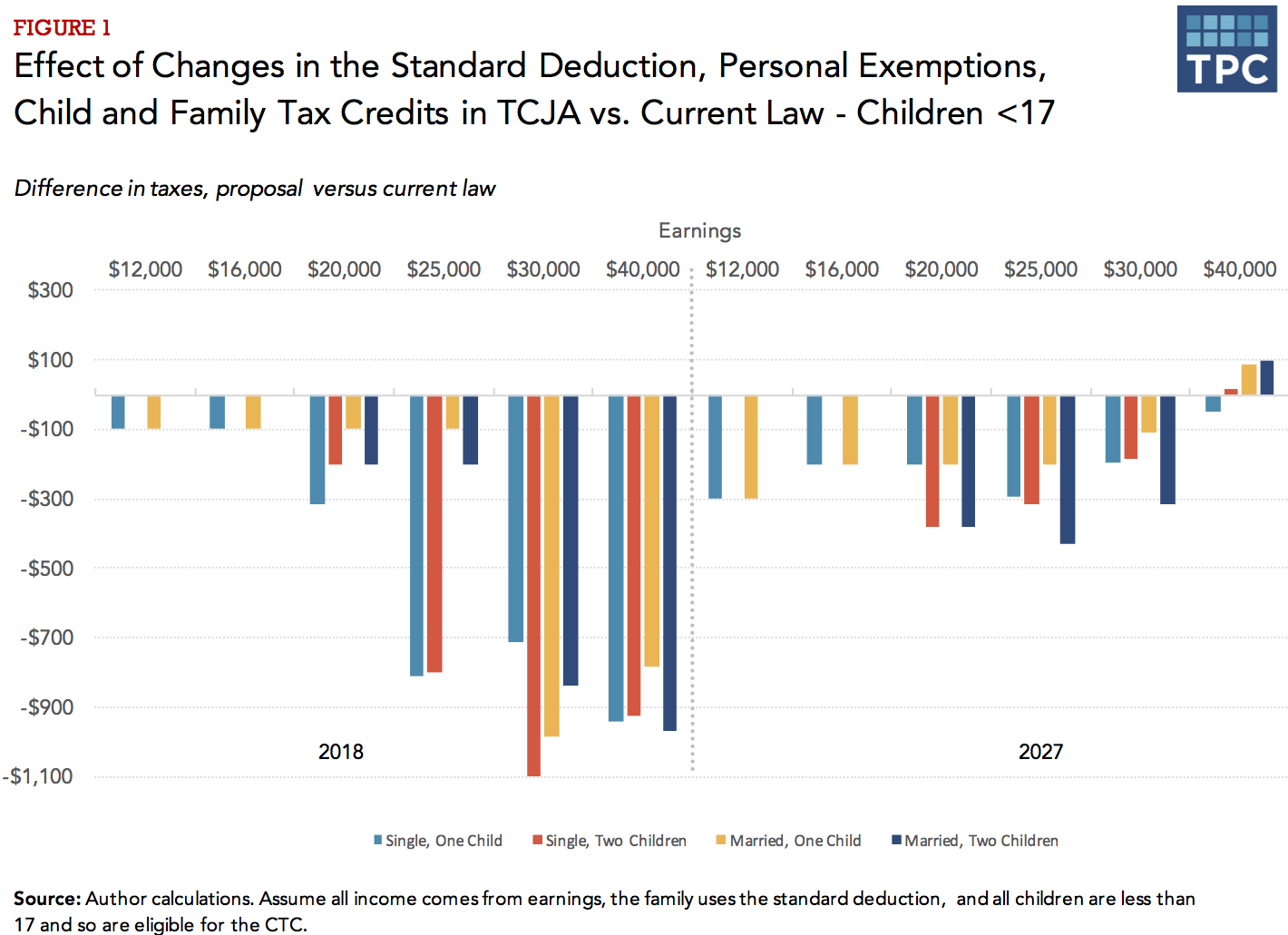 The refundable portion of the CTC grows with inflation. By 2027, this maximum refundable amount is scheduled to rise to $1,300, or $300 more than under current law. As a result, low-income parents with one child would get tax cuts of $300 compared to current law if they earned at least $11,667. Just as in 2018, parents with two children must earn significantly more to benefit from the expanded CTC. However, because taxpayers and spouses lose their Family Tax Credit in 2023, tax benefits for single parents could shrink by up to $300; married couples could lose up to $600 in expired tax credits.

Besides receiving a $300 nonrefundable Family Tax Credit for taxpayers and spouses, parents of older children (who do not benefit from the CTC or its increase) also receive a nonrefundable $300 credit for each dependent age 17 or over. As a result of this Family Tax Credit expiring after 5 years, they lose even more by 2027 – resulting in sometimes substantial tax hikes. 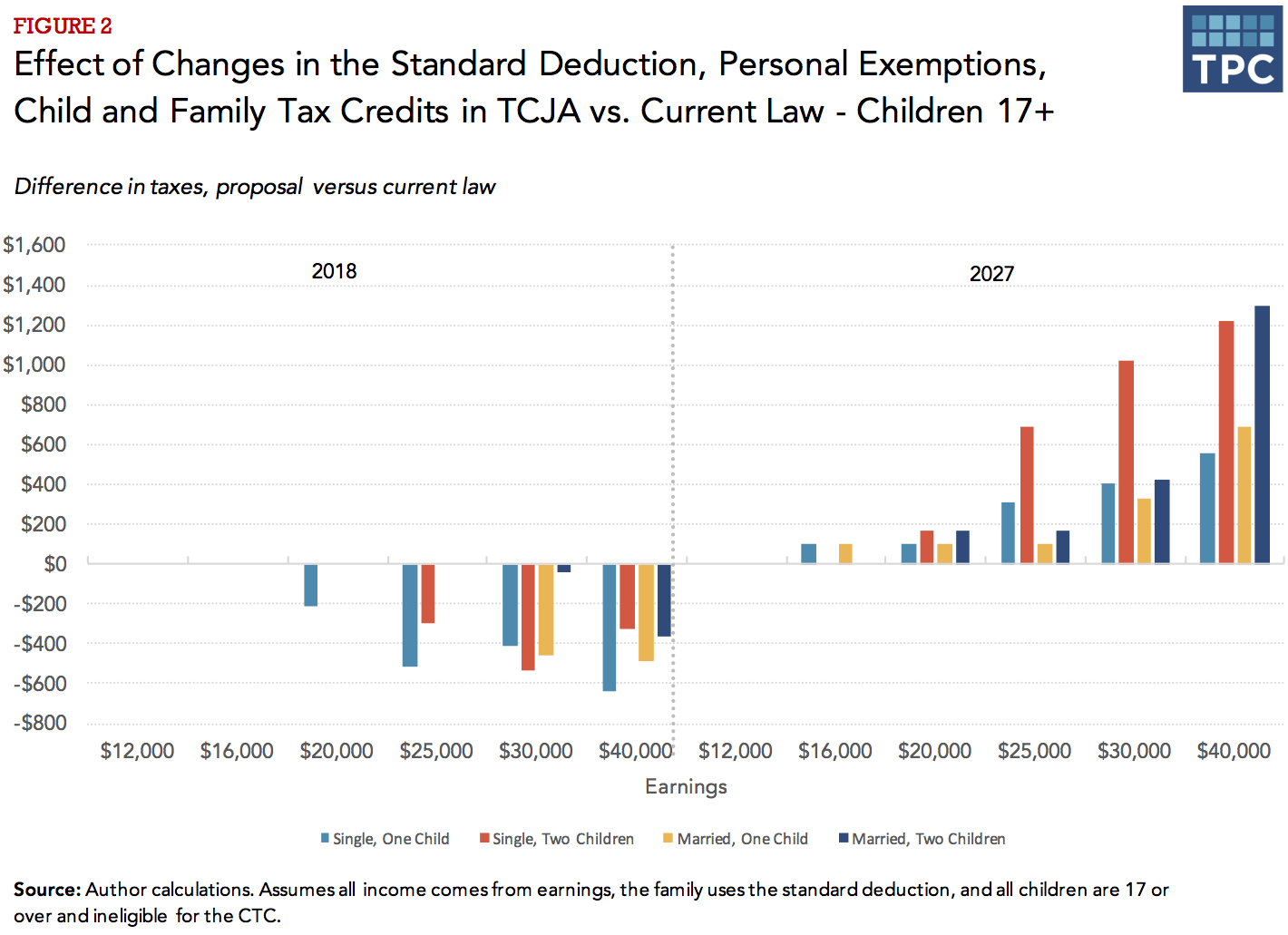 Increasing the CTC and making a larger share refundable is certainly one way to cut taxes for low- and moderate-income families. But neither the House nor Senate versions of the bill accomplish this very well, especially since they would eliminate the personal exemption that is so valuable to large families.