Don’t Laugh at Illinois, Your State Could Be Next

A Midwestern state passing a budget is not typically front-page news in the New York Times. Then again, most states don't go 736 days without a budget. Over the past few years, Illinois became a punchline for people who follow state finances (yes, we occasionally make jokes). Legislators laughing out loud at the governor's budget address this year did not help matters. But Illinois' budget drama is not that different from other states in 2017—and that's both bad and good news.

First the bad news. Illinois was the only state to go two years without a budget but it was far from the only state to miss a fiscal deadline. According to the National Conference of State Legislatures, 10 states failed to pass budgets by the start of their fiscal year (July 1 in most states) and three of those states still have not done so. Twelve more (including two that passed late budgets) needed special sessions to finish the job. 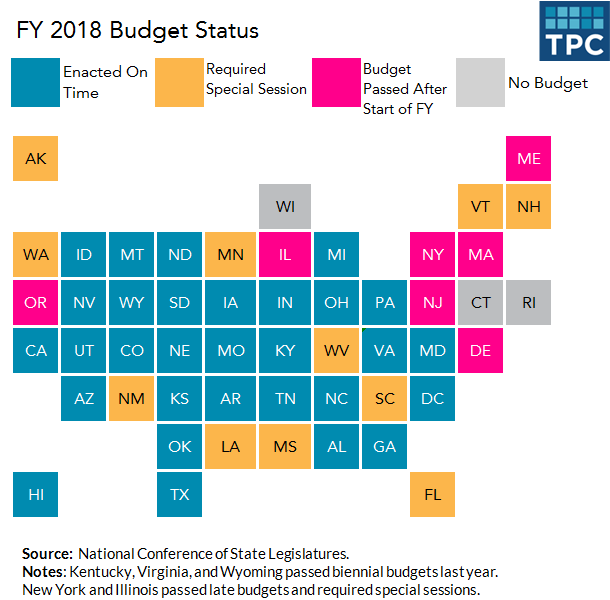 And the problem goes well beyond blown deadlines. State revenues are not meeting projections across the country despite a growing economy. In fiscal 2017, general fund revenue came in below forecast in 33 states. Income tax revenue is lower than anticipated in part because people may be delaying some capital gain realizations while they wait for federal tax cuts. Sales tax revenue is also sluggish, mostly because people are consuming more untaxed services and making more online purchases (which are technically taxable, but if the seller doesn’t collect the sales tax buyers rarely pay the use tax). Low energy prices, while good for consumers, are hurting states that depend on related tax revenues.

Meanwhile, states must contend with the rising costs of many government services. Underfunded public pensions, a big problem in Illinois and several other states, complicate the fiscal politics. And some states have made those problems worse by passing tax cuts they could not afford.

These trends are causing budget headaches in all 50 state capitals. The National Association of State Budget Officers reported 23 states made mid-year budget cuts in fiscal 2017, a "historically high number outside of a recessionary period." In fiscal 2018, state spending is expected to increase just 1.0 percent, the smallest growth since the Great Recession.

Adding to these ongoing state budget problems: the federal government. Congress has not passed any major legislation yet, but many of the ideas on its agenda would kick huge budget questions to the states. How do states respond if Congress cuts the federal contribution to Medicaid? What if Congress repeals the state and local tax deduction? And many of the president’s proposed budget cuts—such as food stamps—would land hard on the states.

But we promised some good news, so back to Illinois. That state  exacerbated its own budget problems in 2015 when it let a temporary personal and corporate income tax hike —used to plug a previous budget hole— expire. Without the revenue, the state struggled to pass a budget. So this year, the legislature roughly restored the higher tax rates, and made them permanent this time.

The state's Republican governor, Bruce Rauner, vetoed the budget, comparing the tax hike to a "two-by-four smacked across the forehead." But with Republican support, the legislature overrode his veto, influenced by a rating agency warning that Illinois’ credit was heading for "junk" status.

While few politicians want to raise taxes, many states are learning that tax cuts are no panacea. State economic development depends on good infrastructure and workforce development. Families and employers want quality schools. And numerous private and public groups (including local governments) depend on state funding.

Kansas has become the poster child for the tax cut story. Governor Sam Brownback promised an economic boom if the state passed deep income tax cuts in 2012 and 2013. The tax cuts passed but the boom never happened, revenues plummeted, and the state made deep cuts to spending. Spurred in part by a court ruling the state was not adequately funding education, the overwhelmingly Republican legislature passed a tax hike this year and overrode that governor’s veto, too. Oklahoma’s Republican lawmakers also passed tax increases this year in part because budget cuts had forced numerous school districts to move to a four-day week.

That’s not to suggest that  tax increases are an easy answer to state budget problems. Connecticut still has a budget mess despite recent tax hikes. But legislators are starting to recognize fiscal realities, including the state of the national economy and ongoing efforts to cut federal spending. Increasingly, state lawmakers are taking tough, but prudent, votes even at the risk of defying an executive of their own party.

This post was updated on July 12, 2017 to reflect state budget action after publication.