The changes in taxes and health care benefits in Senate Majority Leader Mitch McConnell’s alternative to the Affordable Care Act would leave lower-income households worse off on average while those with high incomes would be better off, according to a new analysis by the Urban Institute’s Health Policy Center and the Urban-Brookings Tax Policy Center.

The McConnell plan, called the Better Care Reconciliation Act (BCRA), does not yet have a majority of votes in the Senate and is likely to be revised. As proposed last month, the measure would cut taxes, before considering changes to health insurance credits, for people of all incomes. However, reductions in the federal contribution to Medicaid and in federal financial assistance for those buying health insurance on the individual market would disproportionately hurt lower-income households but have little effect on those with higher incomes. The joint HPC-TPC analysis looked at changes in net government transfers in 2026, when nearly all provisions of the BCRA would be in place.

The analysis looked at the effects of several tax and benefit changes. It included the bill’s elimination of the Affordable Care Act’s cost sharing subsidies, changes to premium rating rules, its tax credits to subsidize the cost of individual insurance, and reductions in the federal contribution to Medicaid. The analysis included repeal of the ACA’s tax penalties on individuals without insurance and on firms that do not offer adequate health coverage. It also included repeal of the ACA’s 3.8 percent net investment income tax and the 0.9 percent Medicare surtax for individuals making $200,000 or more and couples making $250,000+, its excise taxes on health-care businesses, and its changes to the medical expense deduction. 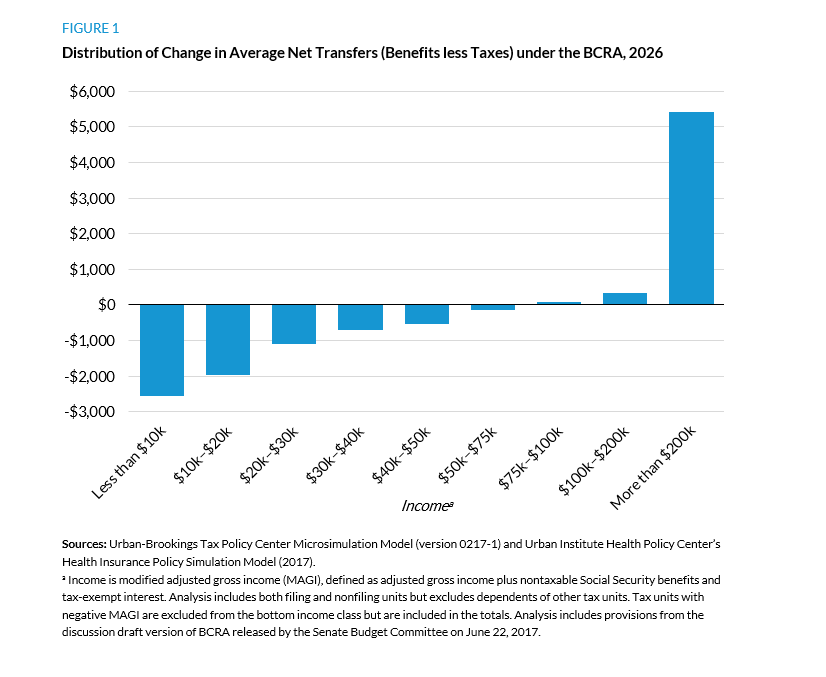 The net result: The mix of benefit reductions and tax cuts in the Senate leadership plan would be highly regressive. Those making $10,000 or less would lose an average of $2,550, or almost two-thirds of their income.

Middle-income households making $50,000-$75,000 would receive roughly what they do today. On average, modest reductions in government insurance subsidies would be nearly offset by small tax cuts. Overall, they’d see a net reduction in government transfers of about $150, or 0.2 percent of their income.

The findings are similar to what TPC and HPC found for the House’s effort to replace the ACA. That’s no surprise since the tax provisions are nearly identical—except for slightly different changes in the medical expense deduction. Both also included big cuts in Medicaid cuts and insurance subsidies, though the details vary.

The regressive nature of these proposals helps explain why no Democrats have been willing to sign on the McConnell plan, and why even many Republicans seem reluctant to embrace it.