Repeal of the State and Local Tax Deduction

Taxpayers who itemize deductions on their federal income tax returns can deduct state and local real estate and personal property taxes as well as either state income taxes or general sales taxes. State and local income and real estate taxes make up the bulk of total state and local taxes deducted (about 60 percent and 35 percent, respectively), while sales taxes and personal property taxes account for the remainder. The state and local tax (SALT) deduction is one of the largest federal tax expenditures, with an estimated revenue cost of $96 billion in 2017 and $1.3 trillion over the 10-year period from 2017 to 2026.

State and local taxes have been deductible since the inception of the federal income tax in 1913. Initially, all state and local taxes not directly tied to a benefit were deductible against federal taxable income. In 1964, deductible taxes were limited to state and local property (real and personal property), income, general sales, and motor fuels taxes. Congress eliminated the deduction for taxes on motor fuels in 1978 and the deduction for general sales tax in 1986. It temporarily reinstated the sales tax deduction in 2004, allowing taxpayers to deduct either income taxes or sales taxes, but not both. Congress made that provision permanent in 2015.

Who Claims the SALT Deduction? 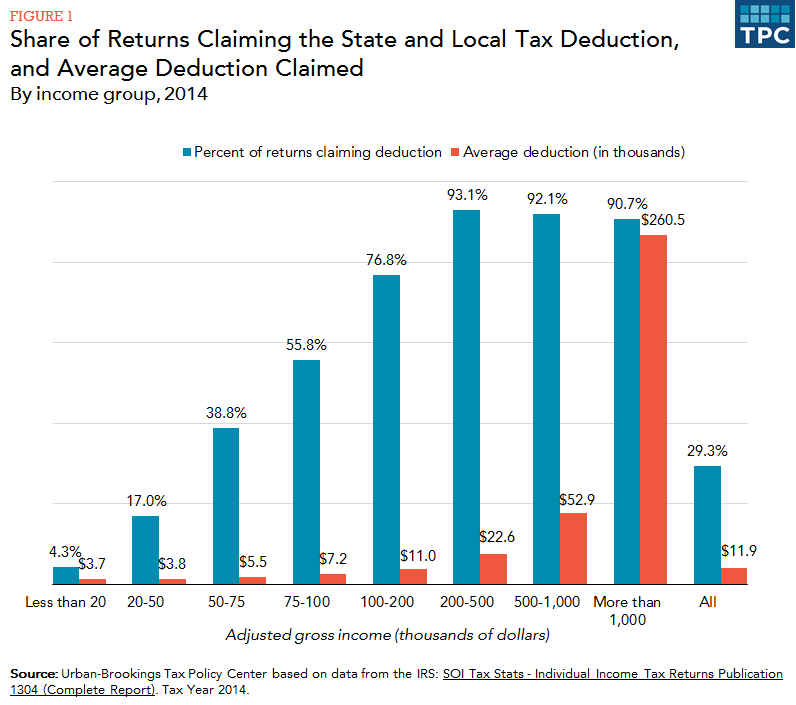 Although most high-income taxpayers claim a SALT deduction, the federal individual alternative minimum tax (AMT) limits or eliminates the benefit for many of them. The AMT is a parallel income tax system with fewer exemptions and deductions than the regular income tax as well as a narrower set of tax rates. Taxpayers potentially subject to the AMT must calculate their taxes under both the regular income tax and the AMT and pay the higher amount. State and local taxes are not deductible under the AMT, which is the major reason why taxpayers have to pay the alternative tax. 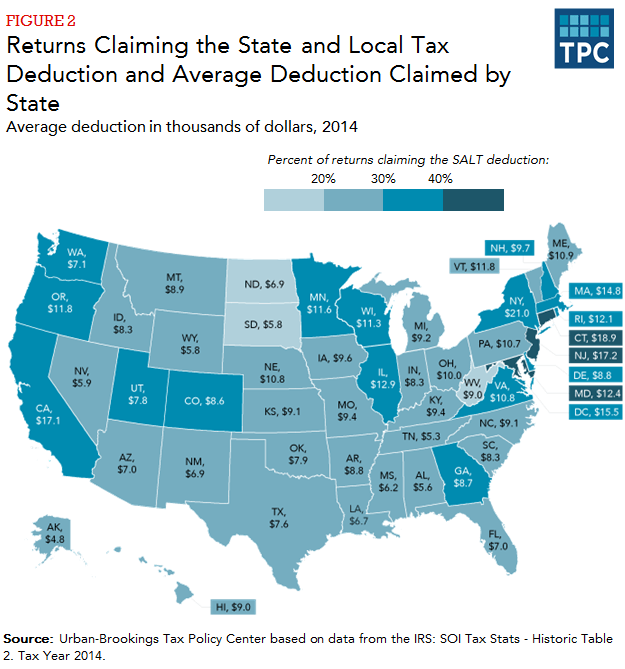 Effects of the Deduction

The SALT deduction indirectly subsidizes state and local governments by decreasing the net cost of nonfederal taxes to those who pay them. For example, a $100 increase in state income taxes costs a taxpayer in the 35 percent federal income tax bracket just $65, the $100 increase minus $35 saved in federal taxes, if the additional tax is deductible. This subsidy encourages state and local governments to levy higher taxes (and, presumably, provide more services) than they otherwise would. It also encourages them to use deductible taxes in place of nondeductible taxes (such as selective sales taxes on alcohol, tobacco, and gasoline), fees, and other charges.

Critics of the deduction argue that state and local taxes simply reflect payments for services provided by those jurisdictions and, as such, should be treated no differently than other forms of spending. They also point to the uneven distribution of benefits across income groups and states.

Proponents of the deduction counter that the portion of an individual’s income claimed by state and local taxes is not really disposable income, and that taxing it at the federal level is double taxation. Moreover, they argue that federal subsidies are warranted because a significant portion of state and local government spending is for education, health, public welfare, and transportation, all of which have important spillovers that benefit the population in other jurisdictions as well. A counterargument, however, is that while federal support may be warranted, the substantial revenues gained by eliminating or limiting the deduction could be used to provide direct support through federal grants and loans.

Proposals to Limit or Eliminate the Deduction

Eliminating or curtailing the SALT deduction would put pressure on state and local governments to cut their taxes (or limit tax increases) because the cost of those taxes to itemizing taxpayers would go up. Tax increases would be spread unevenly across states, disproportionately affecting those with higher percentages of high income residents and higher state personal income tax rates (figure 3). 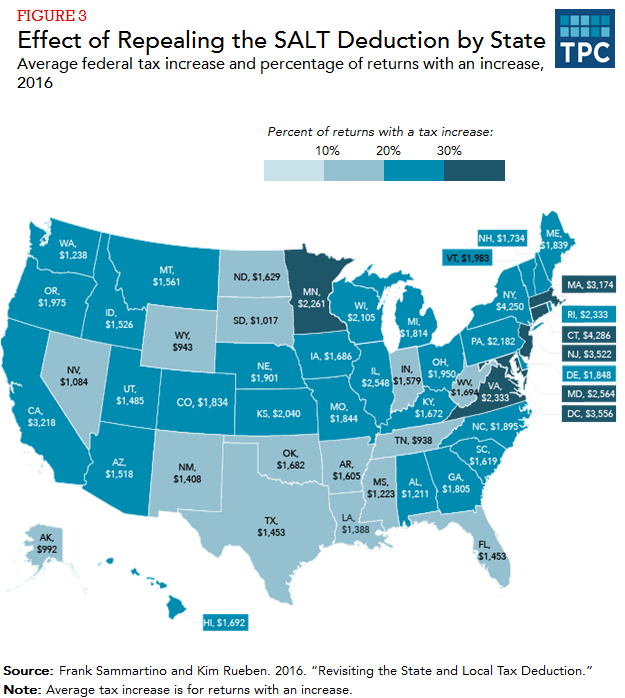 States could respond by cutting tax rates or changing the composition of revenue sources. Because the SALT deduction only lowers the burden of state taxes for taxpayers who itemize, generally high earners, the deduction encourages states to adopt a more progressive state income tax. Thus, ending the SALT deduction could push states away from progressive tax structures.

Reactions following two recent federal tax changes suggest that any response could be limited. The Tax Reform Act of 1986 eliminated the deduction, but only for general sales taxes. States, however, did not respond by reducing their state sales tax rates or shifting from sales taxes to other taxes, at least initially. And states didn’t raise their income tax rates after the American Taxpayer Relief Act of 2012 raised the top federal income tax rate and thus increased the value of itemized deductions. In fact, many states did just the opposite and cut income tax rates following the federal change.