Trump would increase number of households not paying income taxes

If you'd like to take a break from the made-for-TV thrills of the Republican convention, TPC has prepared a series of bite-sized explanations of Donald Trump's tax plan. We'll be running them daily while the GOP is gathering in Cleveland. Next week, when Democrats are having their get-together in Philadelphia, TPC will do the same for Hillary Clinton.

Four years ago, the Republican nominee for president, Mitt Romney, got in political trouble for deriding "the 47 percent" of Americans who did not pay income taxes. But even as that share has fallen, this year's GOP nominee, Donald Trump, has put forward a plan that would significantly increase the number of households that do not pay individual income taxes. In 2017, his tax plan would expand the pool of non-payers from 44 percent to 63 percent. 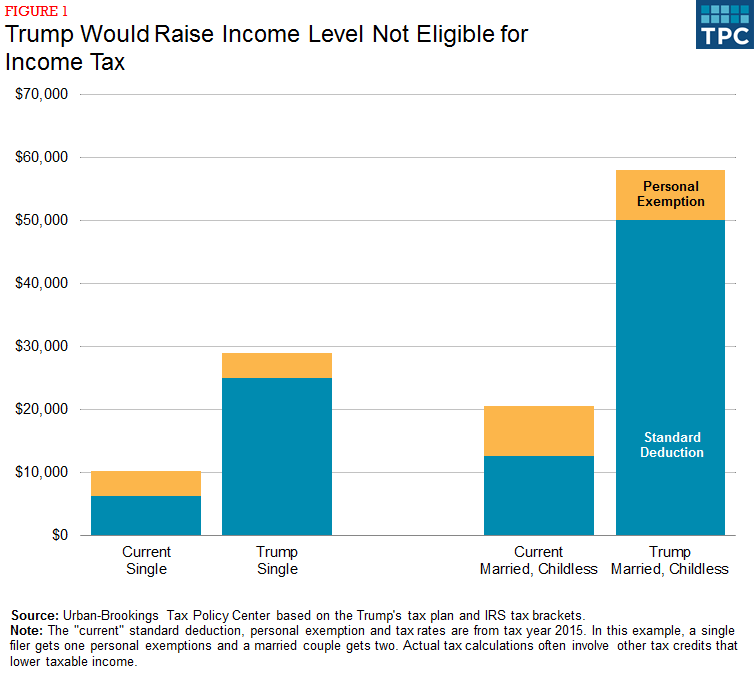 Fewer households would pay income taxes primarily because Trump would increase the standard deduction from $6,300 to $25,000 for single filers and from $12,600 to $50,000 for married couples. Add in (current) personal exemptions and the plan would sharply raise the income threshold for having any taxable income. In combination with tax credits and other tax preferences (that affect individual calculations), Trump's proposed changes would eliminate taxable income for 63 percent of households and lower tax payments for numerous other households across the entire income spectrum.

However, as we note in our video, "Who doesn’t pay federal taxes?," virtually everyone pays at least some tax—payroll taxes, excise taxes, and state and local taxes—even those who pay no income tax. Trump’s tax plan wouldn't change that.