The Tax Policy Center has updated its estimate of the percentage of Americans who pay no federal individual income taxes. And the number is: 44 percent—roughly what it was last year but well below the 50 percent peak during the Great Recession. TPC projects the fraction will decline slowly to 40 percent a decade from now.

Of course, nearly all of those who pay no federal income tax do pay other taxes: sales taxes, excise taxes, and property taxes, for example. As I’ve previously pointed out, a majority of those non-payers work and thus also pay the payroll taxes that help support Social Security and Medicare. Some readers counter that, for many, payroll taxes are more than offset by refundable credits, such as the earned income tax credit (EITC) or the child tax credit (CTC). How many workers get more in refundable credits than they owe in payroll taxes?

TPC estimates that about one-third of workers who pay no federal income tax get net refundable credits that fully cover their payroll taxes, including their employer’s share.

To get a little deeper into the weeds, about 60 percent of those who pay no income tax will work and owe payroll taxes. (Most of the other 40 percent are retirees whose income is too low to owe income tax.) Of those who work, two-thirds will have payroll tax liability in excess of any refundable income tax credits. Thus, only about 9 percent of households have their payroll tax fully (or more than fully) offset by those refundable credits. 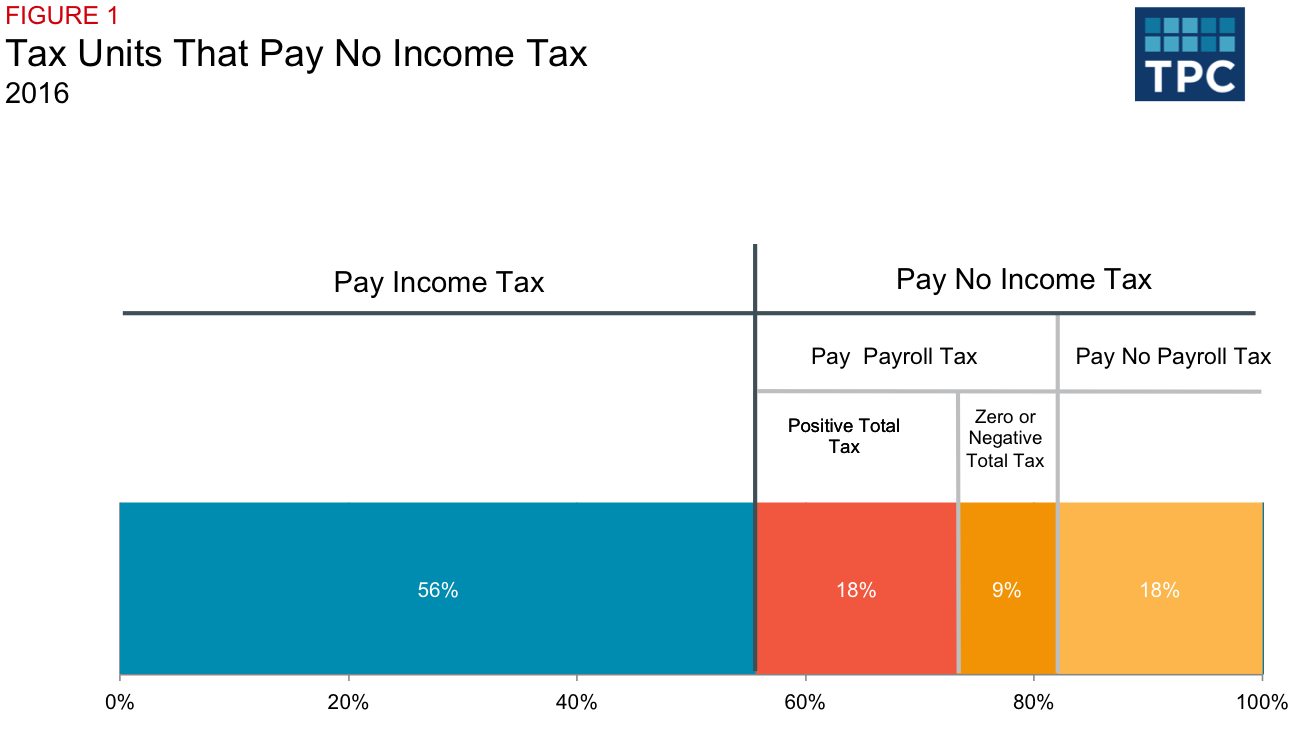 Notes: Percentages do not sum to 100 because of rounding.

It’s no surprise that refundable income tax credits fully cover payroll taxes for some households—one of the rationales for the EITC when it was created in 1975 was to offset payroll taxes. Since then, the size of the EITC has increased much faster than payroll taxes and Congress has created two new refundable credits—the CTC and the American Opportunity tax credit. Combined with lower income tax rates and higher standard deductions, the larger credits have made many households non-payers of income plus payroll taxes.

Refundable credits make it possible for some low-income households with workers to avoid paying income and payroll taxes. Even so, nearly three-quarters of Americans will end up paying at least one of those taxes this year.

In this April 15, 2010 file photo canceled mail addressed to the Department of the Treasury's Internal Revenue Service is seen at New York post office. This year's tax season will look a lot like last year's, but with a few sweeteners added. Most of the tax changes put in place in 2009 to spur the economy remained in effect in 2010, even though the recession was officially declared over. (AP Photo/Tina Fineberg, File)