Federal lawmakers ranging from Sherrod Brown to Paul Ryan have proposed expanding the earned income tax credit (EITC) for childless workers for years without enacting legislation. In 2014, the District of Columbia actually did it, and now a new report from the District’s Office of Revenue Analysis shows why this reform was such a big deal for the city—and how and why other states and the federal government could and should follow the District’s example.

“Childless” workers include both adults without children and those with children who live the majority of the year with another parent. As an Obama administration report noted, these adults often are unmarried, young, and without a college education—exactly the people the government should encourage to join the labor force.

Yet, childless workers remain the one group still taxed into poverty. Few are eligible for the existing federal EITC and those who are receive only a fraction of the benefits available to workers with children. In tax year 2018, workers with a custodial child could claim a credit as long as their income was below $40,320, but childless workers lost the credit once their income reached $15,270. And while a parent with one child received a maximum tax credit of $3,461, a childless worker’s EITC topped out at $519. As a result, most childless workers miss out on the positive effects of the EITC: encouraging work, reducing poverty, and offsetting regressive taxes such as federal payroll taxes and state sales taxes.

As the DC Tax Revision Commission noted, while the District’s EITC was the most generous state-level credit in the nation, a simple match would always leave childless workers behind. As such, it recommended, and the DC Council approved in its 2014 tax reform legislation, two changes that traded some complexity for targeted tax relief: 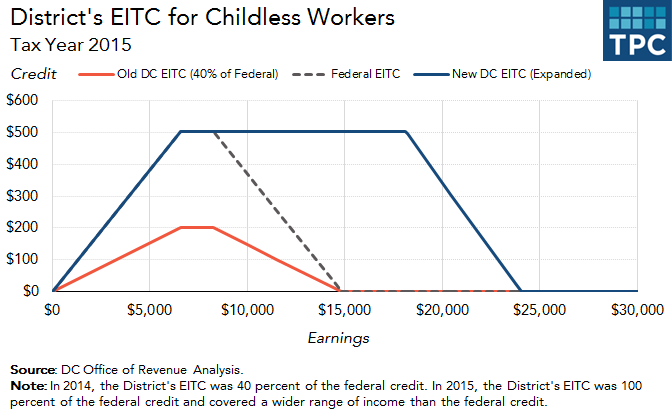 The total number of District filers claiming the EITC increased from 41,391 in 2014 to 53,839 in 2015, and nearly all that growth was from childless workers. According to the report, 9,500 workers received a DC EITC but not a federal EITC in 2015. And the number of childless workers claiming both the federal EITC and DC EITC increased by roughly 3,000 that year—possibly because more workers filed returns claiming the credit after learning of the expanded District benefit.

The report also sheds light on who benefited from the EITC expansion. First, while most childless beneficiaries of the federal credit were part-time workers, many full-time childless workers claimed the expanded DC EITC. Second, childless workers tended to be younger: Those ages 25 to 30 were most likely to claim the credit (the youngest age at which a childless worker can claim both the federal and DC EITC is 25). Third, the District estimates (using a gender analysis of first names) that a plurality of childless filers were male, while a plurality of claimants with children were female.

The District weighed two potential obstacles when it expanded the EITC—complexity and lost revenue. It appears to have successfully managed both. Despite departing from the federal EITC rules, the District had few problems administering the credit. As a volunteer tax preparer in the District, I’ve found that tax preparation software makes the calculations very simple. And the District’s study finds the expanded EITC for childless workers cost only $8 million in foregone revenue in 2015—or less than 0.1 percent of the District’s general revenue.

The relatively large benefits to workers, the increased EITC claims, and the relatively low revenue cost in the District should give every state reason to consider its own EITC expansion for childless workers that goes beyond the federal limits. Better yet, Congress could learn from the District’s experience and finally expand the federal credit.