House Ways & Means Committee Chair Kevin Brady (R-TX) and other top House Republicans are exploring some ideas for a proposed tax reform 2.0, building on the Tax Cuts and Jobs Act, which was enacted last year.  And while they have yet to settle on  the details,  their framework does not include an expansion of the earned income tax credit (EITC) for workers without children at home. That’s a missed opportunity. I’ve recently finished a new analysis that shows that even a modest increase in the credit for these workers could substantially help reduce poverty.

The idea of increasing the EITC for workers without children at home was raised by Paul Ryan (R-WI) and former President Obama in years past. But the final Tax Cuts and Jobs Act (TCJA) excluded such a measure. In the end, the TCJA provided substantial benefits to high-income people but lower benefits to those with low- and middle-incomes.

Now that House policymakers say they once again want to revisit the tax code, they should shift their focus to those largely left out of last year’s cut and consider expanding the EITC for workers without children at home – often called “childless workers” for tax purposes. (In some cases, these individuals are parents, but their children are either living with another parent or independently.)

The existing childless EITC has at least four shortcomings, relative to the EITC for workers with children:

I analyzed an alternative that would make four major changes in the EITC for workers with no children at home. It would: 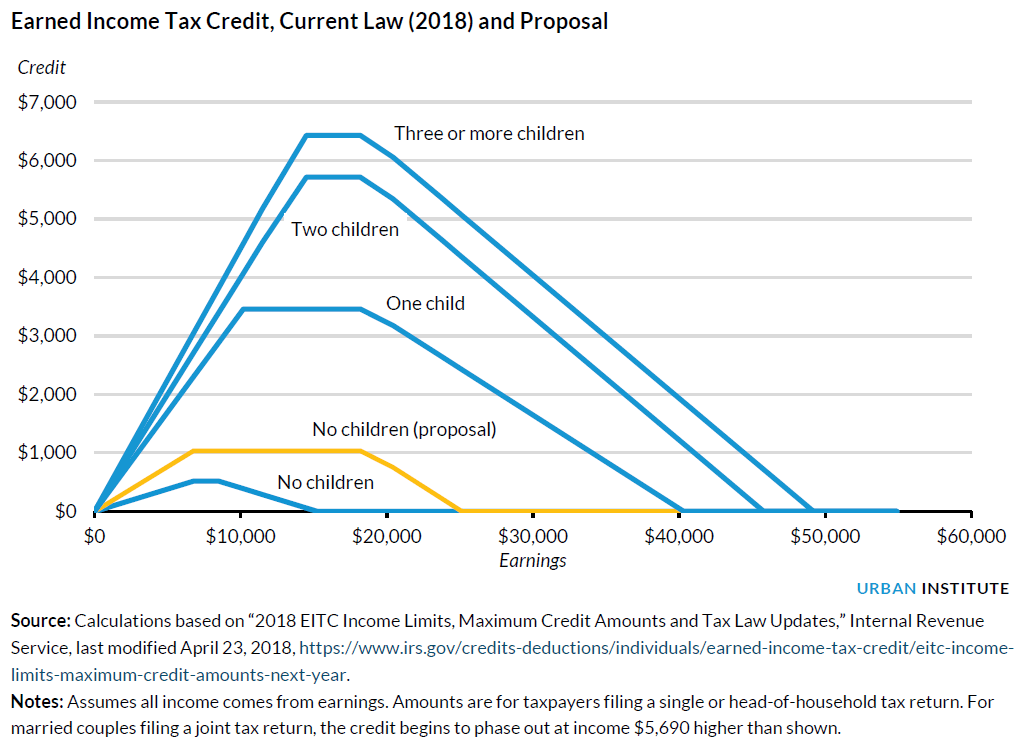 The proposal would deliver an average benefit of $600 to workers with no children who benefit from the larger credit and lift about 700,000 adults out of poverty at a 10-year budget cost of about $95 billion. Benefits would be roughly split between people in the lowest two income quintiles.

In July, the Council of Economic Advisors (CEA) boldly pronounced that the war on poverty was “largely over”, a dubious claim explored by my colleague, Greg Acs, here. There’s still work to be done to address poverty in America – and expanding the childless EITC would be a great way to start that work.