A Comprehensive and Accessible Analysis of Trade, Immigration, and International Taxation

In Open: The Progressive Case for Free Trade, Immigration, and Global Capital, Kimberly Clausing has written a comprehensive and accessible analysis of three of the major economic issues of our time.  Donald Trump’s 2016 election victory is evidence that economists have done a terrible job explaining the benefits of borders that are more open to goods, services, and human capital.

Even worse, economists have blundered when it comes to discussing the distributional implications of trade. We insist that while some people lose their jobs or suffer declining wages, it is all for the greater good and the benefit of the overall economy. This has not been a winning strategy. Clausing, an economics professor at Reed College, explains that the failure of policymakers to deal with those distributional problems has fueled a wave of populist resentment that impedes the interests of both those touting the benefits of trade and other cross-border flows (i.e., the globalists) and the working people who have been left behind.

Professor Clausing supports her arguments with a treasure trove of useful data. The book would be worth buying just for the tables and charts (although the explanatory narrative is engaging and enlightening too). For example, many have argued that tariffs do not necessarily reduce trade deficits because exchange rates adjust and foreign countries retaliate. Clausing explains all that, but her most effective tool is a simple chart (see below) that illustrates her point: Bigger tariffs are correlated with bigger trade deficits (approximated by a negative current account balance). 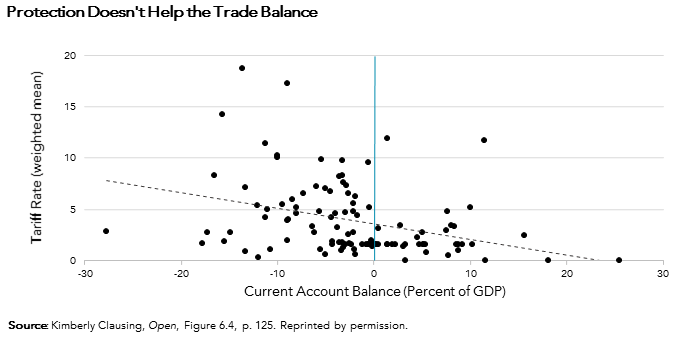 Clausing also includes lots of amusing and illuminating stories. For example, did you know that Homo Sapiens may have prevailed over the bigger, stronger Neanderthals because our ancestors figured out the benefits of specialization and trade (Clausing, p. 55)? I didn’t. She describes the benefits of international commerce by describing what happens when it is blocked: Countries have successfully used trade sanctions to punish their enemies. She cites evidence that economic sanctions have collectively “[b]een more deadly than the entire history of weapons of mass destruction…” (Clausing, p. 56).

And, tellingly, those trade agreements the president so glibly threatens to dismantle have been a great deal for the US because we have lower tariffs than most other countries. Agreeing to jointly eliminate tariffs reduces trade barriers more for our trading partners than for us (Clausing, p. 96).

Not surprisingly, Professor Clausing includes a nice discussion of profit shifting by multi-national corporations, an area where she has done important research. She illustrates the absurdity of the way multinational firms are permitted to shift taxable income by pointing out that seven percent of multinational corporations’ foreign profits are earned in Bermuda, which has a population the size of the student body at Ohio State University. Clausing argues that the Tax Cuts and Jobs Act went in exactly the wrong direction by exempting substantial amounts of foreign profits from US tax. She’d prefer to tax the worldwide profits of all companies doing business in the US (with a credit for foreign taxes paid), although she also presents an array of more incremental options.

Chapter 8: “immigrants, we get the job done,” is a love letter to foreign-born Americans, chock full of supporting data. Foreign-born workers in scientific fields were responsible for between 30 percent and 50 percent of US productivity growth from 1990 to 2010. US scientists have won 65 percent of all Nobel prizes in chemistry, medicine, physics, and economics. More than half of these scientists were foreign-born. Given low US birth rates, immigrants may be all that stands between us and demographic catastrophe. And there’s evidence that barriers to international labor mobility are may be 50 times as costly as trade barriers.

Thomas Piketty was criticized for breezing through his policy solution to inequality in his book, Capital. Clausing might go too far in the opposite direction in Open. She includes three chapters of policy proposals that go far beyond immigration and trade. It’s kind of a smart academic’s version of the Green New Deal with much more detail. I fear her liberal utopian policy vision will alienate some readers who otherwise will find the analysis of trade and immigration appealing.

The book isn’t perfect. There's some unnecessary repetition (largely because the analysis presented in earlier chapters is quite memorable). A chart on immigration from chapter 2 even makes a surprise reappearance in chapter 8. And the book sometimes falls into jargon.  For example, the chart above would be clearer to non-economists if it were presented in terms of the trade surplus rather than the current account balance. Yeah, I know that they aren’t exactly the same, but they’d show the same pattern and most people know what a trade surplus is.

Those quibbles notwithstanding, Open should be required reading for every presidential candidate in 2020, every journalist on the election beat, and everyone who pulls a voting lever.  That won’t happen, but if you want to get beyond the recent wave of fact-free rhetoric about globalism, you should read this book.