The major tax provisions of the pandemic relief bill proposed by House Ways & Means Committee Democrats on January 8 would reduce 2021 federal taxes by an average of about $3,100, according to a new analysis by the Tax Policy Center. About two-thirds of the benefits would go to low- and middle-income households (those making about $91,000 or less). But about 11 percent would go to the highest-income 20 percent of households—those making about $164,000 or more.

The congressional Joint Committee on Taxation estimates that all the tax provisions in the relief bill would reduce federal revenues by about $460 billion in fiscal year 2021 and about $600 billion over 10 years. 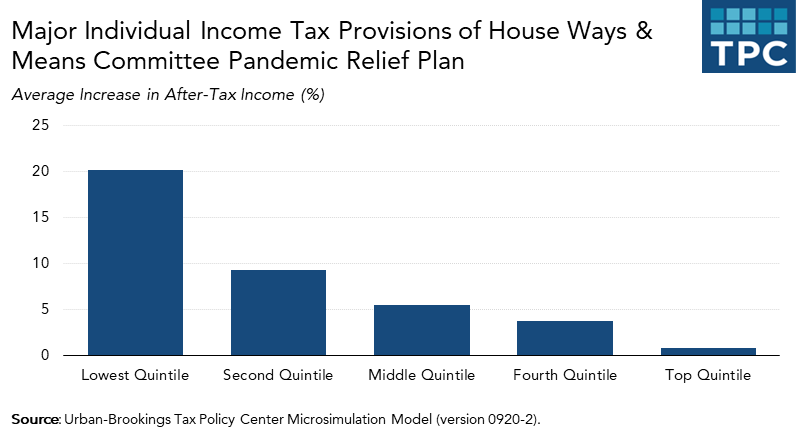 TPC analyzed four of the major provisions, including a new round of economic impact payments (aka stimulus checks), and enhancements to the Child Tax Credit (CTC) the Earned Income Tax Credit (EITC) and the Child and Dependent Care Tax Credit (CDCTC). TPC did not analyze other provisions such as an enhanced premium tax credit for Affordable Care Act health insurance as well as corporate and pension tax changes.  Here’s a quick look at each provision:

Child Tax Credit: For 2021, the Ways & Means plan would increase the credit from $2,000 to $3,600 for each child under age 6 and to $3,000 for every child from age 6 through age 17. It also would make the credit fully refundable: Families would get the full credit regardless of earnings. The additional credits would phase out starting at $75,000 of AGI for singles, $112,500 for heads of household, and $150,000 for married couples filing jointly. Current law credits would continue to phase-out at higher income levels and no one would receive a lower payment than they do today.

TPC found that for families with children, the enhanced credit would increase average after-tax incomes by about $2,100 or nearly 2 percent. More than one-third of the benefit would go to the lowest income parents, who’d get an average tax cut of almost $3,300.  Low and middle-income parents would receive nearly 80 percent of benefits of the expanded CTC.

Earned Income Tax Credit: The committee Democrats would make the credit more generous for workers with no children living in their home. It also would expand eligibility for parents with children in several ways, including increasing to $10,000 the amount of investment income they are allowed. Among all households, about 70 percent of the benefit of these changes would go to the lowest income families. Among families with children, more than one-third of the benefit would go to those very low-income households.

Child and Dependent Care Tax Credit: The bill would make the credit fully refundable, increase the maximum credit rate from 30 percent of dependent care costs to 50 percent and revise the phase-out rates for higher-income households. The credit would phase-out entirely starting at $400,000. These changes would boost incomes by an average of about $60 for all households, and by about $200 for families with children.

The biggest beneficiaries among  families with children would be the lowest-income 40 percent of households. The bill would increase their after-tax incomes by about 0.4 percent, and combined they’d get about 30 percent of the benefit of the CDCTC expansion.  Middle-income households would get a quarter of the tax cuts from the CDCTC changes. Upper middle-income households—those in the fourth quintile—would get about one-third of the benefit for families with children and their after-tax incomes would increase by an average of $350, or 0.3 percent of after-tax income. A handful of families in the highest-income quintile also would get a benefit, though their tax cuts would be very small.

The House & Means Committee could have done a better job targeting both economic impact payments and the enhanced CTC.  Still, its bill would provide substantial relief to low- and moderate-income households at a time when many are in deep economic distress.