How Biden Can Expand And Better Target the Child Tax Credit

In a recent blog, I looked at two ways Congress could refocus those $1,400 per person relief payments on those who need it most. But there is an even stronger case for better targeting President Biden’s proposed increases in the Child Tax Credit (CTC).

The American Rescue Plan Biden proposed in January would make the credit fully refundable for 2021. It also would temporarily increase the credit amount from $2,000 to $3,600 for each child under age 6 and to $3,000 for older children. In addition, 17-year-olds would qualify for the credit, which is now limited to those age 16 and younger.

But there is a problem: The current CTC is very poorly targeted. Since the 2017 Tax Cuts and Jobs Act (TCJA), married couples with children who file jointly can make as much as $400,000 and still be eligible for the full credit, while those with even higher incomes still get some benefit. Under current law, about 90 percent of families with children benefit from the credit.

As a reminder, median household income in the US is about $68,000. Thus, the government is providing a full subsidy to families making up to roughly six times median income. This is, candidly, nuts.

And there is a simple solution: Why not make the additional, more generous credit available only to those families who are low- and middle-income?

In his presidential campaign Biden--foolishly in my opinion-- promised to never raise taxes on those making $400,000 or less. Thus, he foreclosed the possibility of lowering the eligibility threshold for the current law credit.

However, that self-imposed constraint does not mean Congress must increase the subsidy for households that do not need it. Rather, lawmakers could start phasing out eligibility for the increased credit for single parents making, say, $75,000 annually and married couples making up to $150,000. That level still is comfortably above that $68,000 household median. But it is much closer to middle income than $400,000-plus.

Getting the targeting right is especially important since many Democrats make no secret of wanting to eventually make Biden’s proposed CTC expansions permanent.

My colleagues at the Tax Policy Center analyzed a hypothetical plan that still includes all of Biden’s proposed CTC expansions, but starts phasing them out for families at the lower thresholds of $75,000 for single parents and $150,000 for parents filing jointly. 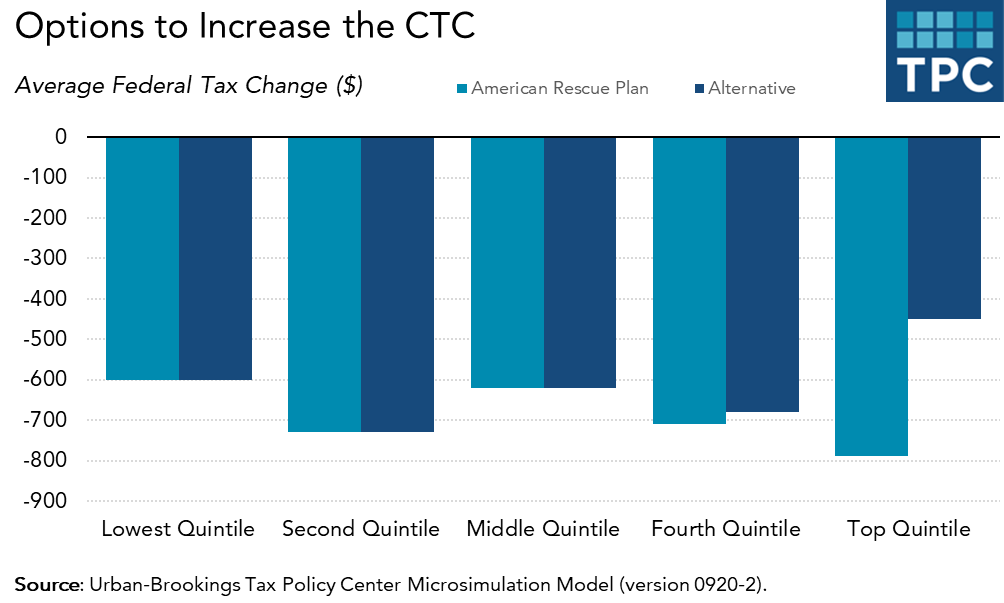 TPC found that about 3 million fewer households would get the expanded CTC under the alternative than under Biden’s January plan. Those higher-income households would continue to get $2,000 per child under age 17, as they do under current law.

Relative to the plan Biden proposed in January, this alternative would reduce Treasury’s one-year revenue loss by about $10 billion. That’s not nearly enough to bridge the gap between Biden’s $1.9 trillion proposal and the $618 billion plan offered by a group of 10 GOP senators. But $10 billion still is real money and the revised plan would be a far more effective way to achieve Biden’s goal of bolstering families’ financial security during the pandemic.

Of course, the effects would be more dramatic for families with children. The highest-income 20 percent of these households would get a tax cut of only about $550, compared to almost $1,400 in Biden’s plan.

Republicans say they are worried about the high cost of Biden’s $1.9 trillion plan. Democrats say they want to help those who have been most hurt economically by the pandemic. Lowering the eligibility threshold for the CTC is a way to accomplish both goals. And combined with better targeting relief payments, they’d make for a far more equitable and efficient response to the pandemic.