Congressional Republicans and some Democrats are urging lawmakers to better target President Biden’s $1.9 trillion plan for new pandemic relief.  And they are right: It makes sense to deliver assistance to those who most need it rather than indiscriminately sending more cash to households who have the resources to weather the pandemic.

Congress could target aid—and save some money--in several ways. One would limit the number of people eligible for a new round of relief payments. Another would cap eligibility for proposed increases in the Child Tax Credit (CTC). In this blog, I’ll look at ways to better target the relief payments. In a future post, I’ll look at how policymakers could do the same with the CTC.

Biden wants to distribute an additional $1,400 per person in relief payments (formally called economic impact payments) to what he describes as “hard hit households.” This would be on top of the $600 payments Congress authorized in late December.

Yet, it is hard to think of couples making $206,000 as needing government assistance. In addition, new research shows that those making less than $50,000 were more likely to spend their most recent  stimulus payments while those making $78,000 or more saved theirs.

I asked my Tax Policy Center colleagues to look at two alternatives. The first would lower the eligibility threshold to $50,000 for singles, $75,000 for heads of households, and $100,000 for couples. The second would keep the CASH Act’s income limits for the full benefit but phase out the payments more quickly—by 10 percent for every $100 of income instead of 5 percent.

For context, TPC estimates that the CASH Act would have made payments to about 167 million people at a cost of about $463 billion.

Lowering the income level where eligibility begins to phase out to $50,000/$75,000/$100,000 would reduce the number of beneficiaries by a bit less than 10 million and lower the cost of new relief payments by about $50 billion, or roughly 11 percent.

Allowing full benefits for those with $75,000/$112,500/$150,000 in income but phasing out the benefit more quickly would leave out about 6 million relatively high-income households. It would save about half as much as the lower income thresholds, or roughly $23 billion.

Neither proposal would change the average amount of the payments for low- and middle-income households, according to TPC. Higher income households would receive smaller benefits, on average, under either alternative. For example, a household in the highest income 20 percent (making about $164,000 or more) would get an average relief payment of about $2,800 under the CASH Act. It would receive about $2,000 if the payment phased out faster and  about $1,400 if payments started to shrink for those with incomes of $50,000, $75,000, and $100,000. 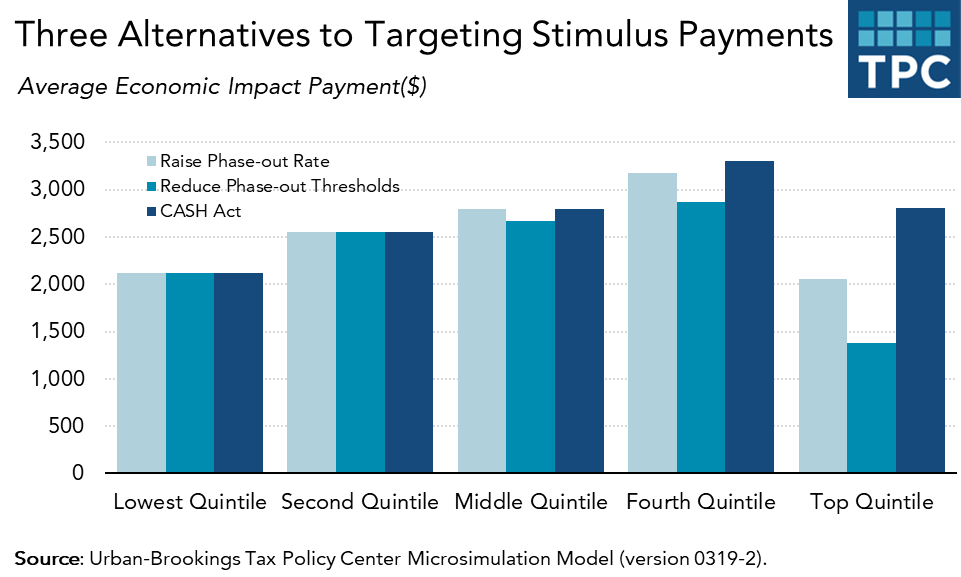 I understand that limiting the number of middle- and upper-middle income people who get government assistance goes against every instinct of most politicians. And neither of these proposals would reduce the cost of a $1.9 trillion plan by a very large percentage. But $50 billion, or even half that, still is real money. Most important, better targeting the payments would send a powerful signal about who Congress and President Biden really want to help as the pandemic rages on.