The major individual income tax provisions in the House-passed Health and Economic Recovery Omnibus Emergency Solutions (HEROES) Act would cut taxes by an average of about $3,300, according to a new analysis by the Tax Policy Center.  Nearly all households would receive some tax cut, with the biggest average benefits, as a share of after-tax income, going to low and moderate-income households.

For most households, the biggest benefit would come from a new round of recovery rebate payments, extending the direct payments included in the recent CARES Act.  On average, households would get a tax payment of $2,060. Two- thirds of the benefit would go to those making $91,000 or less. 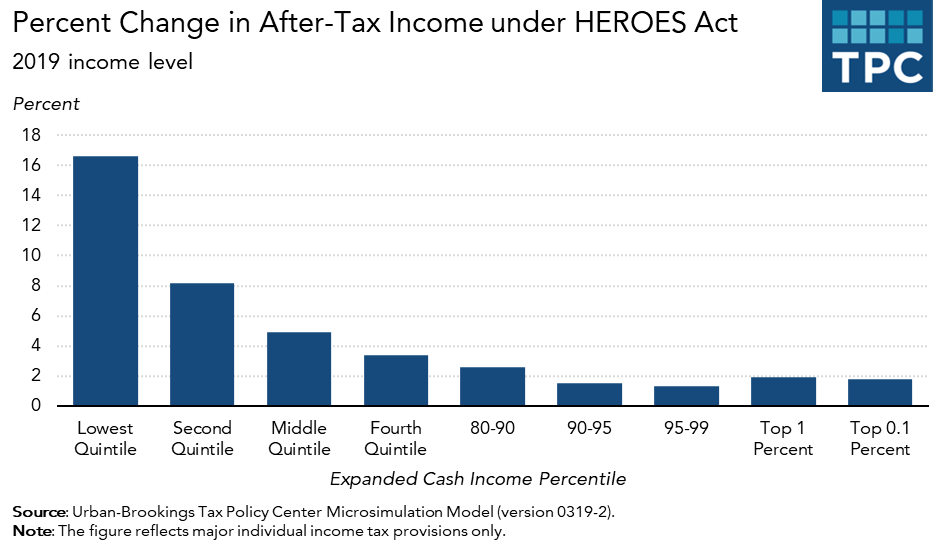 CARES distributed the same amount to adults but only $500 for each child under age 17.HEROES not only increases the size of the payment, it also expands the benefit to include all dependents.

Three provisions to expand the Child Tax Credit (CTC) also would provide significant benefits to eligible families. While these changes would cut taxes by $680 on average for all households, the one-quarter of families eligible for the expanded credit would enjoy an average tax cut of almost $2,600. Households making less than $91,000 would get nearly two-thirds of the benefit. The CTC provisions of HEROES would make the entire credit refundable, increase the credit amount for each child, and raise the maximum qualifying age from 16 to 17.

While most individual income tax provisions of the HEROES Act would target their benefits to low- and moderate-income households, the big exception is the proposal to waive the $10,000 annual cap on the state and local tax (SALT) deduction for two years.

The high price of SALT

TPC estimates that the bottom half of the income distribution would effectively receive no tax benefit from the change, largely since very few would itemize even with the full SALT deduction. But high-income households would do very well. The highest-income 1 percent (those making $819,000 or more) would receive an average tax cut about $33,000, or 1.9 percent of their after-tax income. They’d receive about 57 percent of the benefits of temporarily repealing the SALT deduction cap.

Here’s another way to see how lifting the SALT cap skews the distribution of the HEROES tax cuts. Without the SALT provision, the average tax cut falls from about $3,300 to $2,900. The tax cut for middle income households is effectively identical ($3,010 with all of the major provisions compared to $3,000 in the SALT-free version). But, for the top 1 percent, the difference is striking. When the temporary SALT deduction cap is repealed, those households get an average tax cut of more than $33,000. When it is not, their average tax reduction falls to just $70.

Two important caveats to the TPC analysis: Because the 2020 economy is so uncertain, TPC modeled the changes as if they occurred in the 2019 economy. TPC analyzed provisions to lift the SALT deduction cap, extend and expand the recovery rebates, and expand the Child Tax Credit, the Earned Income Tax Credit, and the Child and Dependent Care Tax Credit. However, the analysis excluded some minor individual income tax provisions as well as business-related changes such as limits on the ability of firms to carry back net operating losses to prior years and the Employee Retention Tax Credit.

The congressional Joint Committee on Taxation (JCT) estimated that all revenue provisions of the HEROES Act (including those TPC did not model) would cut taxes by nearly $900 billion in fiscal years 2020 and 2021. Because some provisions merely delay tax payments to future years, the total 10-year cost of the bill would be $883 billion, according to JCT.  More than half the tax cuts would come from just two provisions—the additional rebates and the two-year waiver of the SALT deduction cap.

The rebates and most other provisions TPC analyzed primarily benefit low- and moderate-income households who are hurt the most by the COVID-19 pandemic. But allowing taxpayers to fully deduct their state and local taxes for two years would create a major windfall for high-income households, who need help the least.