"Let Me Tell You About The Very Rich. They Are Different From You And Me.”

F. Scott Fitzgerald wasn’t talking about the way they make their money, or the taxes they pay, but he could have been. According to a new Tax Policy Center analysis, while the vast majority of us make our livings almost entirely from wages, salaries, or other forms of labor compensation, the highest income 1 percent are the sole exception. Capital income accounts for around a third of their income, and that fraction increases as you go further up the income scale.

I broke TPC’s measure of income, Expanded Cash Income, into five categories: labor compensation, and income from business, capital, retirement plans, and government transfers. For the lowest 20 percent of households (those making $25,500 or less), labor income accounts for about half of all income and government transfers about one third. For nearly every other income group, 60 percent or more comes from wages, salaries, and employment-related benefits. This fraction declines and for the top 1 percent (those making $783,000 or more), their income is about equally split between capital and labor income. At the very top (the top 0.1 percent or those making $3.4 million or more), more than half of income comes from interest, dividends, and capital gains, while only one-quarter comes from wages and benefits. 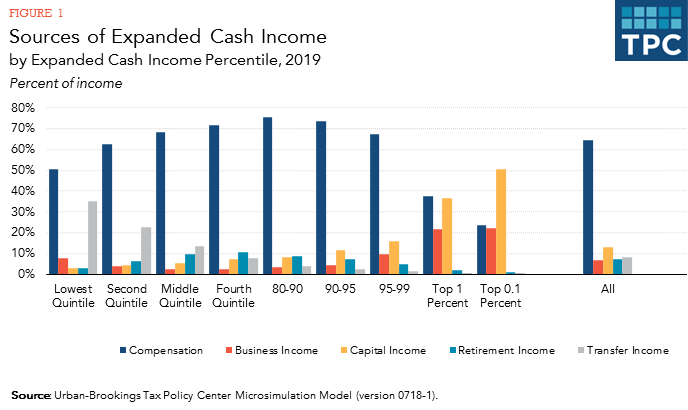 Keep in mind that these data show the shares of income sources within each group, not how specific individuals within each group typically earn their income. In addition, investments can generate gains or losses. On net, all components of income are positive, but some people in an income group may have business or capital losses that are more than offset by the profits of others in that income category.

These differences in sources of income matters for policymakers hoping to use the tax code to reduce income inequality.

Under current law, long-term capital gains and qualified dividends are taxed at significantly lower rates than ordinary income. For example, those with the highest incomes face an individual income tax rate of 37 percent for wage and salary income, but pay only a 23.8 percent rate on long-term capital gains and dividends. While preferential rates on investment income are available to taxpayers across the income distribution, they matter the most at the very top. TPC estimates that in 2018, the top 0.1 percent of households got nearly 57 percent of the benefit of low tax rates on investment income.

The preferential rate structure for long-term gains highlights a potential problem with a 70 percent top tax rate on ordinary income, as proposed by Rep. Alexandria Ocasio-Cortez (D-NY) and others. Unless Congress also significantly increases tax rates on capital income, a large part of the wealthiest Americans’ income would be unaffected. Worse, such a rate structure would encourage wealthy Americans to try to transform wage and interest income into tax-favored capital gains and dividend income, allowing them to avoid the 70 percent rate on this income. If policymakers want to raise income taxes for very high-income households, they will have to think beyond simply increasing ordinary income tax rates.

My TPC colleague Howard Gleckman recently wrote about one such modification: revising the treatment of unrealized capital gains at death. Currently, the tax basis of assets is “stepped-up” to their value at the time of death, providing a new, higher basis for the heir.  This then means that unrealized capital gains over a decedent’s lifetime go completely untaxed. A proposal to address this situation would require that the heir carry over the basis that the decedent had in the asset.  Under this proposal, when an heir sells an asset, she would be taxed on its entire appreciated value, not just on the change in value since she inherited the asset. Removing the step-up in basis would make sure that income gets taxed at some point instead of entirely escaping taxation.

Policymakers hoping to reduce income inequality (and perhaps generate some additional revenue) through changes in the tax system should remember that Fitzgerald quote.