It sure didn’t take long. The 116th Congress hadn’t been in session for a week when we were hit with the very first round of misleading tax talk.

It started when newly elected representative and Internet sensation Alexandria Ocasio-Cortez (D-NY) promoted the idea of a 70 percent individual income tax rate on the “tippy-tops.” The tax, she seemed to be telling CBS's 60 Minutes, would be imposed on those making $10 million or more.

Then, House Republican Whip Steve Scalise (R-LA) responded by darkly warning on twitter that her plan would mean that the government would “take away 70 percent of your income.”

Let’s take a deep breath here, think about how taxes really work, and what a 70 percent tax rate means.

Remember there are several ways to look at tax rates including marginal (or statutory) tax rates and average tax rates.

Marginal tax rates reflect the tax on the last dollar you earn. In a progressive system such as ours, your tax rate rises with your income (until the rate maxes out). So, for example, in 2019 a married couple will pay a 10 percent rate on their first $9,700 of taxable income. Then they’ll pay 12 percent on income from $9,701 to $39,475.

But keep in mind, that rate is imposed on taxable income--after subtracting deductions, credits, and other adjustments. Thus, another way to think about taxes is to measure average tax rates: your tax divided by your total income. Your average tax rate is much lower than your marginal rate since deductions reduce the amount of income that is taxed, credits reduce the amount of tax itself, and the marginal rate is imposed only on that last dollar of income.

Ocasio-Cortez wants a progressive system where her 70 rate would apply only to “your 10 millionth dollar.” So, no, Rep. Scalise, she is not proposing to take 70 percent of everyone’s income. In fact, she wouldn’t even take 70 percent of total income from those making more than $10 million. Remember, they’d be paying lower tax rates on their first $10 million and, as far as we know, they’d still benefit from deductions, exclusions, and credits.

Now let’s look at some history. The US had a top rate that exceeded 90 percent through the 1950s and early 60s and a 70 percent top tax rate from 1971 through 1980. Then President Reagan got Congress to cut it to 50 percent starting in 1982. More recently, the top rate has fluctuated between the mid- and high-30s.

Here’s where Ocasio-Cortez goes off track. Despite what she implies, raising the top tax rate may not be the most effective way to make rich people pay more taxes.

Take a look at this figure, which shows the top marginal income tax rates from 1979 to 2014 and  average federal income tax rates for the highest-income 1 percent of households. That’s not the tippy-top but, in 2018 the top 1 percent makes $755,000 and up. You’ll see that even though Congress made big changes in marginal rates, average rates for the highest income households changed much less. 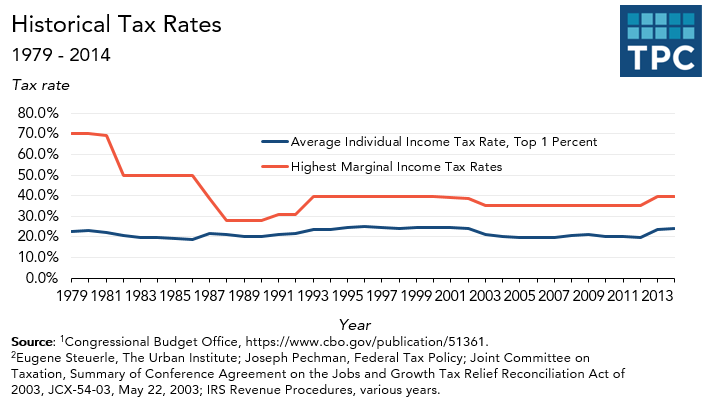 For instance, in 1979 when the top marginal rate was 70 percent, the top 1 percent paid an average of 22.6 percent of their income in individual federal income taxes. In 1982, after the marginal rate was cut to 50 percent, the top 1 percent saw their average rate fall, but only by about 10 percent. When Congress cut the top rate from 50 percent in 1986 to 28 percent for 1988, the average top rate actually rose from 18.6 percent to 21.1 percent.

The reasons are too complicated to go into here, but that exactly the point: Just raising income tax rates on the highest-income households doesn’t do as much for progressivity as some wish.

Here is one simple example of why: Say I’m in the top bracket and give a Picasso to my local art museum. If I get an appraisal of $10 million, I can deduct that amount from my taxable income, which saves me $3.7 million in taxes. If Congress raises my tax rate to 70 percent, I’ll still deduct $10 million but will save $7 million in taxes-- nearly twice as much.

My former TPC colleagues Dan Baneman and Jim Nunns looked at the revenue effects of these trade-offs in a nice short paper here.  As they note, raising the top rate does generate a lot of revenue, but not as much as backers like to think.

One final point: The very rich are different from the merely wealthy. Most people who make the really big bucks do so from the businesses they own and from other investments, not by bringing home a paycheck. What matters to them are tax rates on capital gains, dividends, and business income, not tax rates on ordinary income.

So no, Rep. Ocasio-Cortez, we probably can’t pay for a big new “green” agenda simply by raising the top income tax rate to 70 percent on those at the “tippy top” and, no Rep. Scalise, even if we did, the government would not be taking 70 percent of people’s income.

It is going to be a long year.