The Year of State Tax Cuts: The Sequel 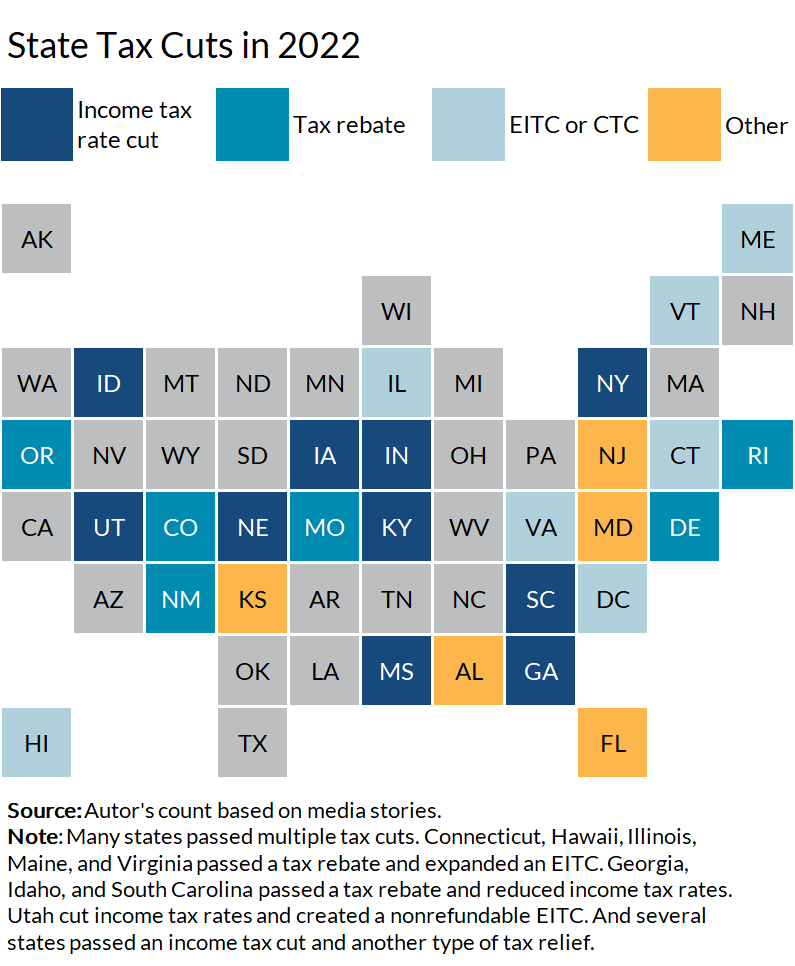 In both years, the scene was set by unexpectedly strong tax collections resulting from a combination of unprecedented federal pandemic spending and economic growth.

However, unlike Hollywood scriptwriters, state legislators cannot simply write a happy ending. In fact, some enacted huge tax cuts just as economic and geopolitical challenges accelerated. The ongoing pandemic, high inflation, rising interest rates, and the war in Ukraine could all slow the economy and put pressure on state budgets.

So here’s a quick look at what tax cuts were passed in 2022 and why some states might have created a budget cliffhanger.

Six states and the District of Columbia created or expanded a major refundable tax credit in 2022.

Most state earned income tax credits (EITC) are calculated as a percentage of the federal credit, so Connecticut, Illinois, and Maine simply increased their match rate. Other states made more filers eligible for the EITC or made their credits refundable. The Tax Policy Center’s 2021 analysis of state tax cuts showed similar EITC expansions in Maryland and New Mexico sent nearly all of the tax relief to households earning less than $30,000.

Meanwhile, Vermont created a $1,000 refundable child tax credit (CTC) for households with children younger than age six. It becomes the sixth state to offer a CTC and third to provide a refundable CTC.

Households in 14 states will get another government check in 2022. But this time it will come from governors rather than the US Treasury. Only three states sent out rebates in 2021.

In most of these states every resident who filed a tax return in the past year or two will get a payment. A handful will limit the payments to households with low- or moderate-incomes.

However, Missouri and South Carolina may send rebates only to residents with a tax liability, which would exclude many low-income households and seniors. Leaders in both states have agreed to rebates but not yet enacted the final legislation.

Grocery and gas tax relief plus everything else

While most states only cut income taxes in 2021, rising prices pushed some states to reduce grocery and gas taxes this year.

Distributing tax rebates when consumer demand is driving up prices may not make a lot of economic sense, but that type of tax cut only affects one budget year. And even a relatively large EITC expansion carries a modest price tag. Increasing Connecticut’s match of the federal credit from 30.5 percent to 41.5 percent cost $49 million.

But the annual cost of the 2022 income tax rate cuts were massive: $525 million in Mississippi, $1.2 billion in Georgia, $2 billion in Iowa. Some cuts will phase in over multiple years, and a few depend on state’s hitting revenue triggers.

But the budget math for states that cut income tax rates could turn bad quickly if the economy weakens and strong revenue growth doesn’t continue. And forecasts show essentially no revenue growth in fiscal year 2023. Plus, keep in mind that many of these states have supermajority rules that make tax hikes far harder than cuts.

Maybe these tax-cutting states will get their Hollywood ending. But horror is also a genre of state budget debate that lends itself to sequels.