A few weeks into their 2022 legislative sessions, the question in most state capitols across the country—from Connecticut to Utah—is not whether to cut taxes but how.

Each state’s tax proposal should be judged on its own merits as well as the state’s fiscal situation and values. However, in 2022, state policymakers may want to consider two key factors when evaluating possible tax cuts:

Thus, a long-term commitment to revenue reductions (or spending increases) might not be prudent. Instead, states might want to target tax cuts at those most harmed by the pandemic.

(Quick interlude: Didn’t the American Rescue Plan prevent states from cutting taxes? Short answer, no, states can still cut taxes if they have sufficient revenues and most do. For the long answer, see here.)

In Arizona and Ohio, households earning more than $100,000 received an overwhelming share of the tax cut benefits. In stark contrast, by expanding their state EITC (and making a few other changes), New Mexico and Maryland distributed nearly all their tax relief to households earning less than $30,000. 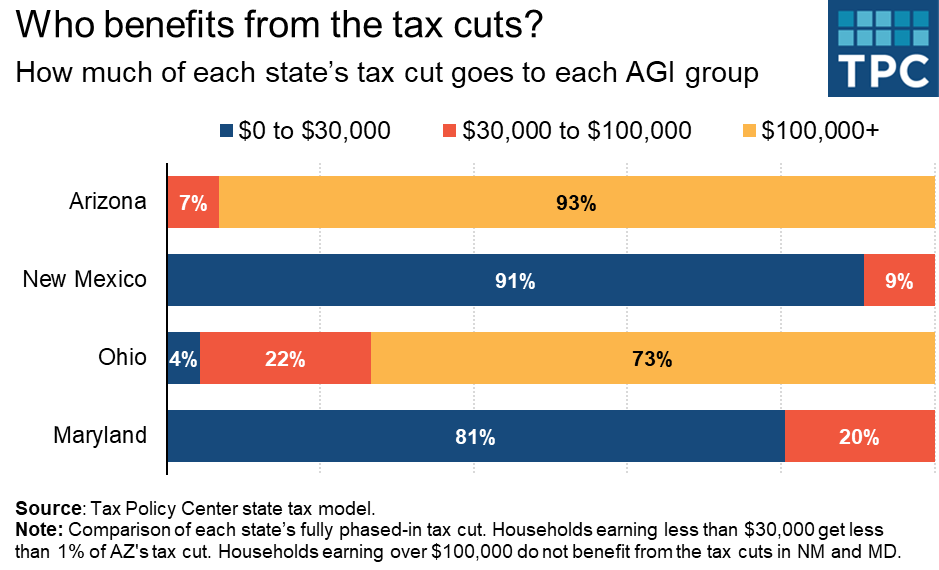 My Tax Policy Center colleagues and I also created representative households (using race and ethnicity, family characteristics, and the median wage for each group) in these four states and ran them through the Tax Policy Center state tax model.

Some tax rate cut supporters in Arizona and Ohio said their tax cuts would attract high-income workers and businesses and this would help all residents. The ability of tax cuts to lure high-income workers and spur economic growth is debatable, but those groups did benefit. However, prominent lawmakers in both states also touted the direct benefits of their tax cuts for average families, and on that metric these tax cuts fail.

No one tax policy change can achieve every policy goal but enacting or expanding a state EITC can deliver significant economic assistance to the households most harmed by the pandemic in a fiscally responsible way. Tax cuts are a legitimate tool in the post-pandemic environment, but states should be aware that different designs have very different effects.