Who benefits from tax subsidies for home ownership?

In 2016, about one-fifth of households will benefit from these deductions. However, over 85 percent of those in the top 1 percent will enjoy these tax breaks while fewer than one-in-20 in the bottom 40 percent will benefit. 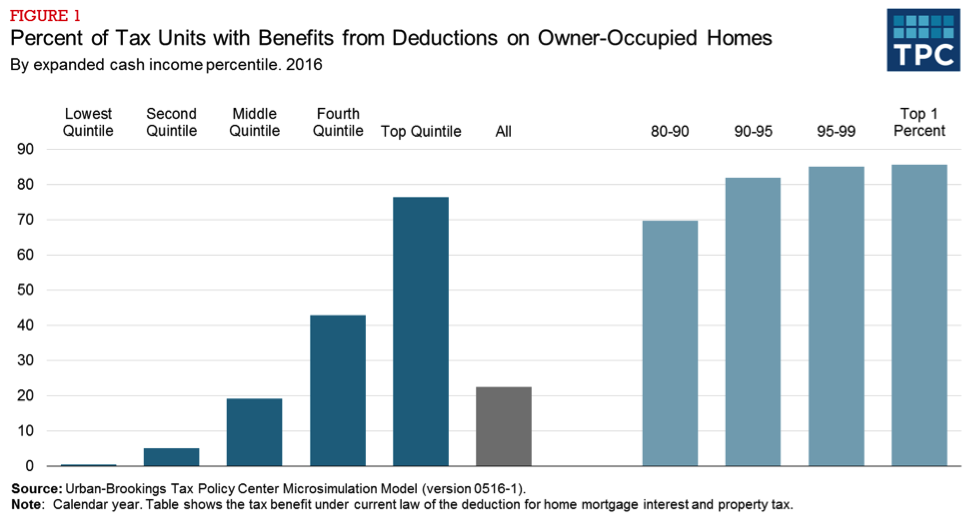 The value of these subsidies also rises with income. The lowest-income 20 percent of households will effectively get no benefit from the deductions for property taxes and mortgage interest. Middle-income households will see an average tax cut of $170, or 0.3 percent of their after-tax income. In contrast, the top 20 percent of the income distribution receives an average benefit of 1.2 percent of after-tax income, or about $2,800. The value of these subsidies as a share of after-tax-income declines for the highest income households in part because the mortgage deduction is capped at $1 million and because of other deduction caps in the tax code. 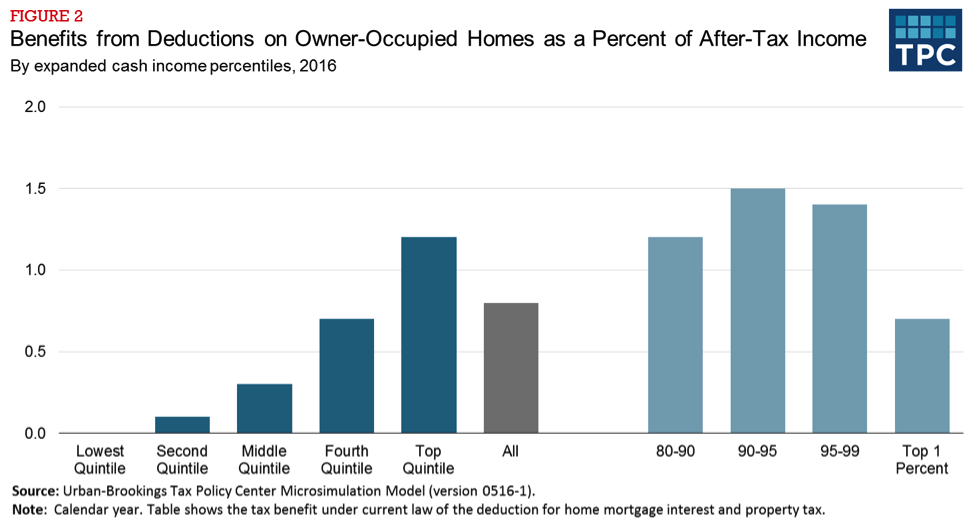 Still, high-income households benefit from home ownership far more than low- and middle-income households. Some reasons: Low-income households have much lower rates of home ownership  and are significantly less likely to itemize (in part because they are not homeowners). Finally, because these tax preferences are designed as deductions rather than credits, they favor high-income taxpayers who are subject to higher tax rates (a deduction is worth 39.6 percent to a top bracket taxpayer, but only one-quarter as much to someone in the bottom tax bracket).

These findings are consistent with earlier analysis by TPC and others. Instead of turning renters into homeowners, homeownership tax expenditures encourage middle- and upper-income individuals to purchase more expensive homes, take on more debt, or buy second homes. The Tax Policy Center previously analyzed options to reform the home mortgage interest deduction  to better target this subsidy to those who need it the most.

In this May 15, 2009 photo, Sweet Potato, the estate of billionaire businessman Ronald Lauder, is partially obscured by hedges in East Hampton, N.Y. Eastern Long Island's summer destination for the ultra-rich and famous has not been immune to the worst recession since the end of World War II, brought on by a nationwide collapse in the housing sector. (AP Photo/Mark Lennihan)