TaxVox is continuing to track a set of economic indicators to see whether the Tax Cuts and Jobs Act has, in President Trump’s words, created “rocket fuel” to boost the US economy. Now that the Commerce Department has released its initial look at third quarter Gross Domestic Product and ther Labor Department has released the October jobs report, where do we stand?

The economy is still growing smartly, but may be showing some signs of slowing. GDP expanded at an estimated 3.5% annual rate in the third quarter, down from 4.2% in the second. Employment is continuing to grow. Stock and bond prices are falling, though from historic highs.  And the federal budget deficit is increasing at a troubling double-digit pace. 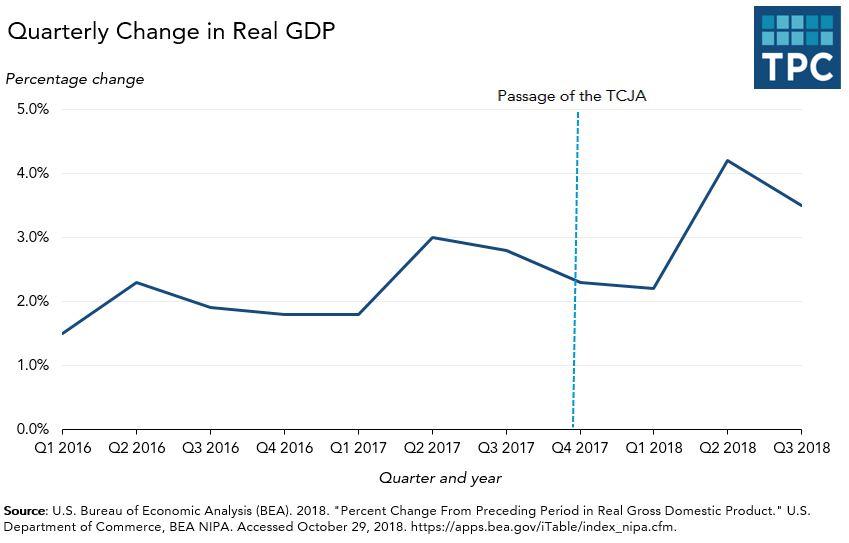 Recent GDP growth was driven mostly by consumer spending, which rose by 4% in the third quarter, and by huge increases in government (mostly military) spending, which increased by 4.6 percent after taking inflation into account. But business and residential investment slowed. Business investment grew at an annual rate of just 0.8%.

A boost in business capital spending was supposed to be the big payoff from the corporate tax rate cuts and other investment incentives that were the centerpiece of the TCJA. It won’t be a good sign for the long-run economy if business investment turns out to have peaked in the first half of the year. That would leave in ashes the Trump Administration’s promises that the TCJA would increase investment that in turn would boost productivity and eventually raise average wages by $4,000 over the long term.

Net exports fell sharply in the third quarter (exactly the opposite result from what Trump has promised). That followed a quarter when overseas sales of agricultural goods such as soybeans flourished as US producers and foreign buyers scrambled to beat Trump’s tariffs. But that mini export boom ended once China imposed tariffs in retaliation for Trump’s trade sanctions. As exports fell, inventories rose.

Employment continues its longer term upward trend, but after smoothing out month-to-month volatility, the pace of growth has been remarkably steady over the past year. The economy has generated roughly 213,000 jobs-a-month over the past year. .That’s up from about 185,000 average new monthly jobs in 2017.

In October, the economy created 250,000 net new jobs. The Labor Dept. revised downward its estimates for September job creation to 118,000. 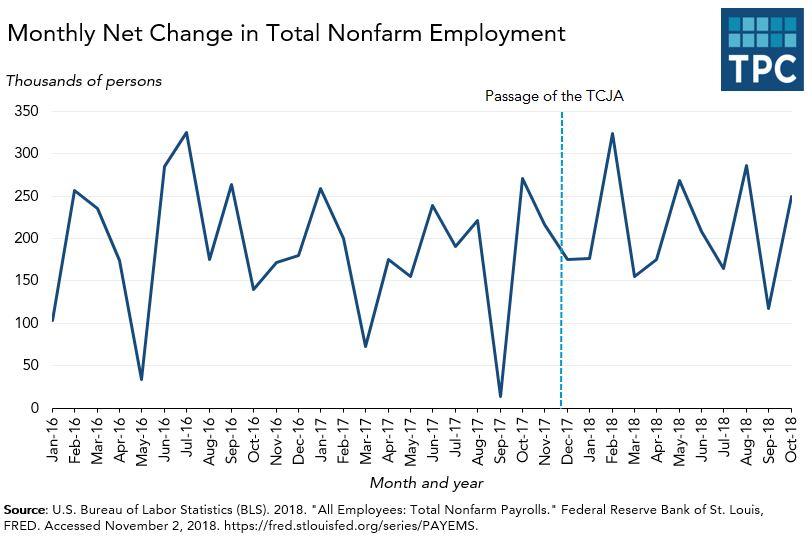 Core inflation (excluding food and energy) remained under control, increasing at a moderate annual rate of 1.6 percent. As the labor market tightens, wages are rising. After taking account inflation, the Labor Department reports that wages increased by 0.6 percent over the past 12 months. 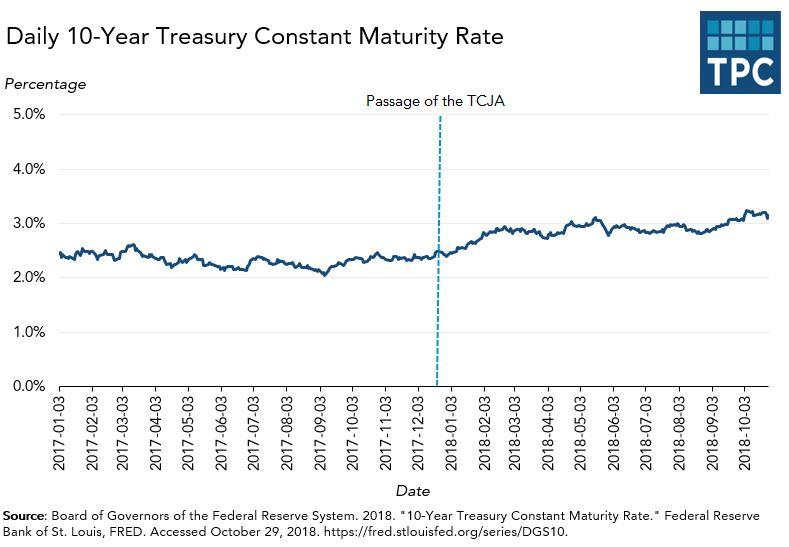 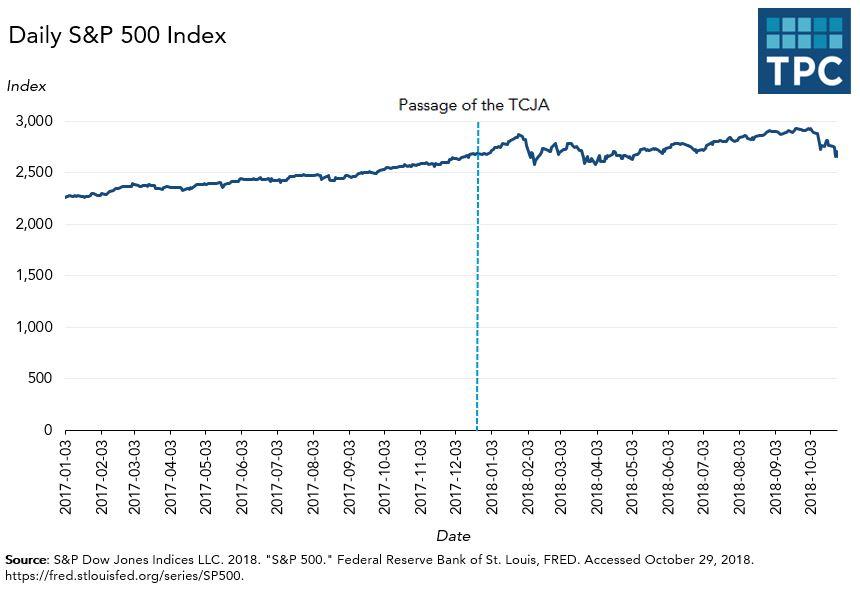 Interest rates continued to rise (and bond prices fell), driven by the Federal Reserve’s slow but steady boost in short term rates and in part due to the burgeoning budget deficit and the federal government’s insatiable need to borrow cash. The deficit for fiscal 2018, which ended on Sept. 30, increased by $113 billion, or 17 percent,  from the prior year, largely due to the TCJA. 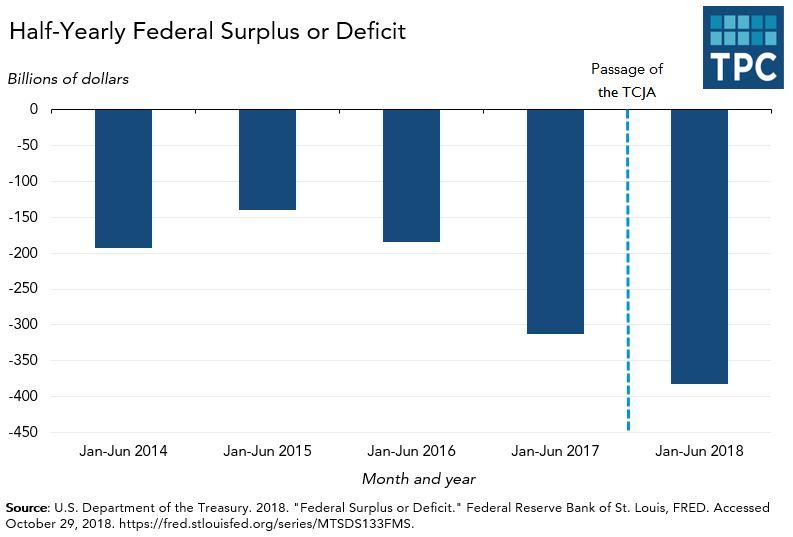 Ten-year Treasury bond rates bottomed out a year ago and have been rising steadily since, roughly doubling from 1.56 percent to 3.138 percent in the past 12 months.

The stock market continues to be volatile but the historic bull market is showing signs of age. The S&P 500 index boomed late last year, perhaps in anticipation of the tax cuts, then sagged, then rallied. It peaked about a month ago, and has since dropped to levels slightly higher than a year ago.

One quarter does not make a trend, of course, but the third quarter contains some hints that perhaps the short run stimulative effects of the TCJA already are beginning to fade—washed out perhaps by a predictable rise in interest rates and Trump’s own trade policy.