Tax Vox is continuing to track a set of economic indicators to see whether the Tax Cuts and Jobs Act has, in President Trump’s words, created “rocket fuel” to boost the US economy. Since the second quarter Gross Domestic Product report came out on Friday, it is a good time to review where we are, though two quarters of data only begin to tell the story.

That’s solid by any reckoning. But the results raise two questions: Is the rate of growth sustainable and how much of it can be attributed to the 2017 tax cuts?

The President, unsurprisingly, says growth will continue to accelerate: “We are now on track to hit an average GDP annual growth of over 3 percent and it could be substantially over 3 percent.”  Treasury Secretary Steven Mnuchin says the economy can sustain that rate “for a period of four to five years.”

But after peering into the innards of the GDP report, many private economists see a blip, not a trend. Many do believe the economy will grow at roughly 3 percent this year, thanks largely to a combination of tax cuts and big increases in government spending. But they fear the economy’s growth rate soon will slow, as the benefits of the tax cuts wear off, the Federal Reserve continues to raise interest rates to stave off inflation, and President Trump’s tariffs increase costs to consumers and businesses.

A look at the innards of the GDP report tends to support that view. 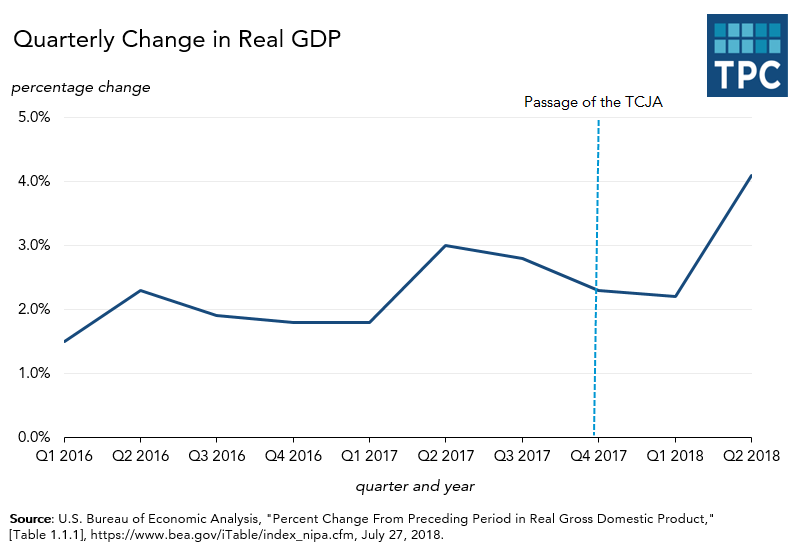 Strong spending by business, consumers, and government suggests short-term stimulus is at play. Most consumers got a tax cut from the TCJA and they appear to be spending it—and more.  Consumer spending grew at an annual rate of 4 percent, a big increase from the 0.5 percent rate in the first quarter.  One cause for concern: Both personal income and personal disposable income rose more slowly in the second quarter than in the first. That means some spending came from savings, a pattern that is not sustainable.

Nonresidential business investment rose at a strong annual rate of 7.3 percent rate on top of the first quarter’s 11.5 percent increase. The tax cuts deserve some credit for the ongoing boost in capital purchases both because of their short-term stimulus effect and because they reduced investment costs. However, other factors, such as an effort by business to lock in investment financing as interest rates rise, may also have been play. Also noteworthy, residential investment continued to lag. Higher interest rates and rising tariff-driven materials costs could exacerbate that troubling trend.

At the same time, after Congress approved a big increase in its fiscal 2018 budget government spending rose at a 2.1 percent rate. Federal outlays rose at a rate of 3.5 percent, the second-fastest since 2014. Military spending received the biggest boost. State and local spending also grew smartly, at an annual rate of 1.4 percent. Like the tax cuts, this big increase in spending provided a short-term boost to the economy that is likely to fade over time. More troubling, the higher spending combined with more than $1 trillion in tax cuts over the next decade, will result in higher deficits and debt and higher interest rates. 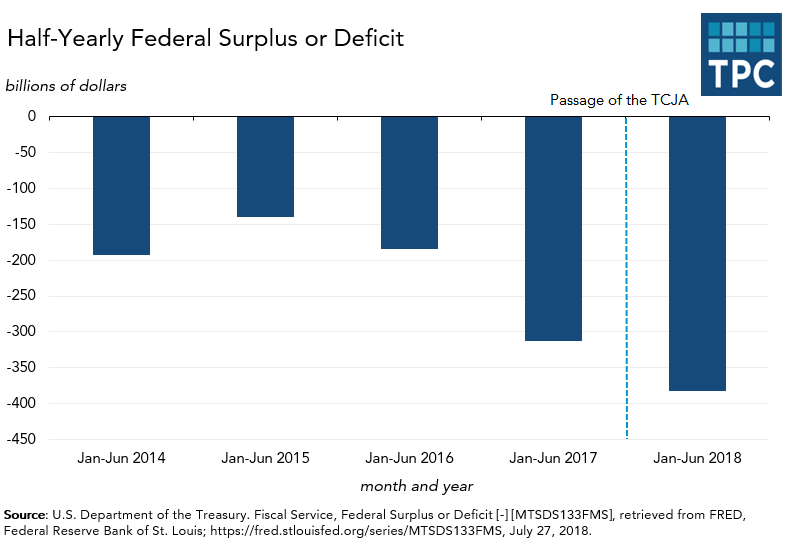 The report included other ambiguous news. For example, the burgeoning trade war accounted for a significant uptick in growth. More than one-quarter of the 4.1 percent overall increase in the annual growth rate was due to a burst of exports. Much of that activity seems to have resulted from overseas buyers purchasing US agricultural goods before tariffs imposed by foreign governments on US exports (in retaliation for US import taxes) took hold. With many of those tariffs now biting, that acceleration of cross-border sales is likely to reverse.

Other indicators suggest the TCJA continues to have relatively modest effects. For example, the stock market, which rose rapidly in anticipation of the tax cuts, has gone sideways since January. Bond yields continue to rise slowly but steadily. 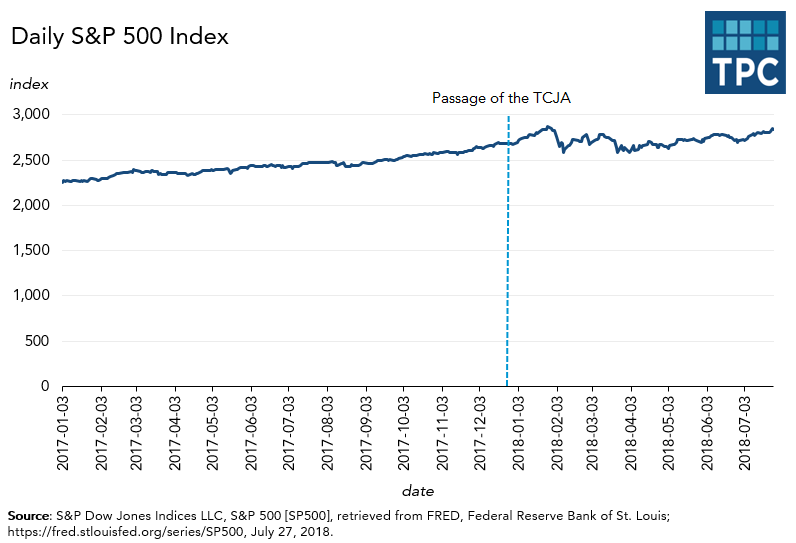 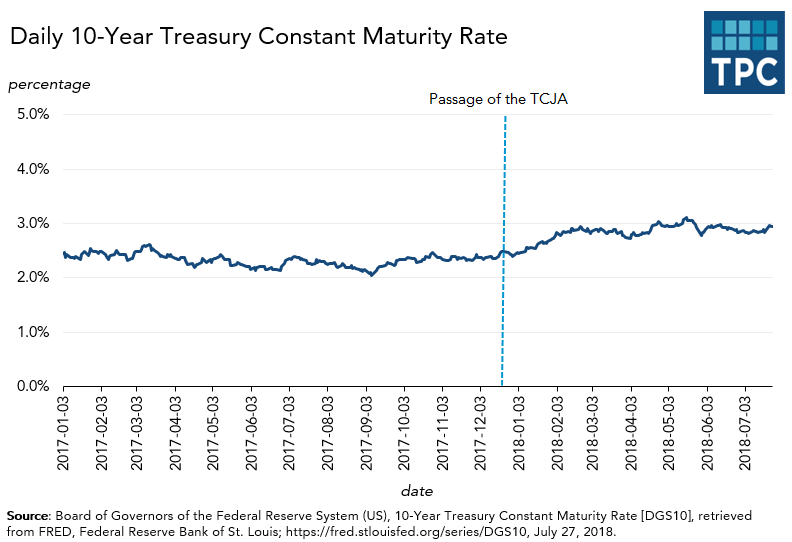 When it comes to employment, both wages and hiring seem to be continuing their patterns from before passage of the TCJA—Non-farm employment continues to grow (by 213,000 in June) but pay raises remain very modest.  Despite promises of big post-tax cut wage hikes, there has been no real change in worker compensation since Congress passed the tax cuts. 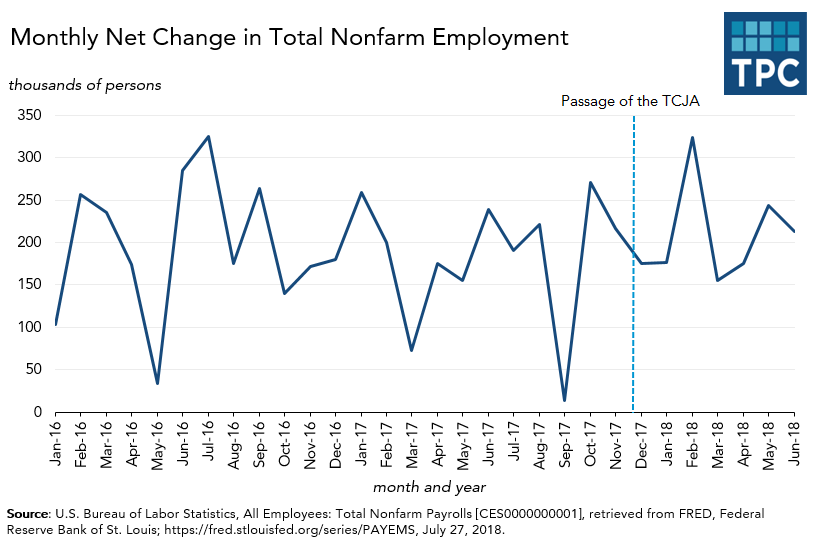 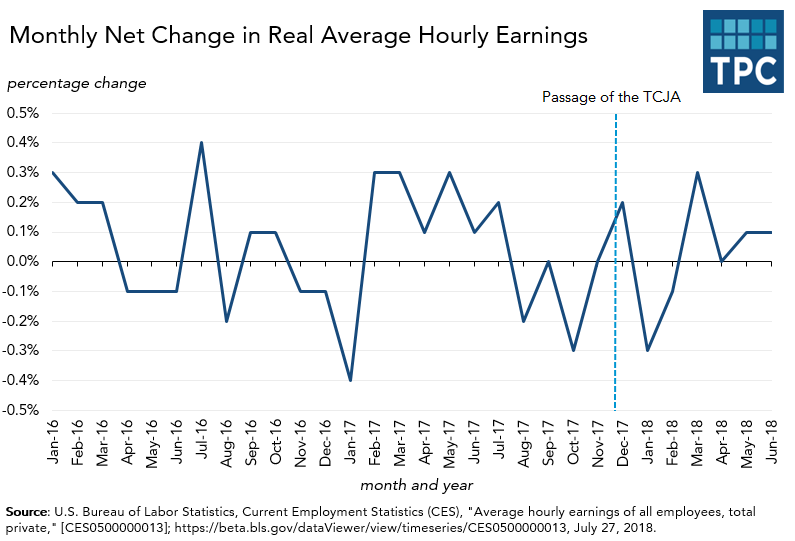 Overall, as my TPC colleague Ben Page and others predicted, the TCJA—combined with big increases in spending—has stimulated the short-term economy. But there is little reason to believe last quarter’s big burst in growth is sustainable.