The Ups and Downs Of California’s Gas Tax

Last year, California raised its excise taxes on motor fuels. The tax on gasoline increased from 34.7 cents per gallon to 46.7 cents per gallon (and it increased another 1 cent per gallon this year). The tax on diesel fuel increased from 34 cents to 67 cents per gallon.  Vehicle registration fees also were raised.  Next week, the state’s voters will have an opportunity to repeal these increases through Proposition 6. While critics of last year’s gas tax hike insist that levies are too high (and might not be used only to fund construction and maintenance of roads in any event) the reality is that the increase brought the total real federal and state gasoline tax burden in California back to its historic average. 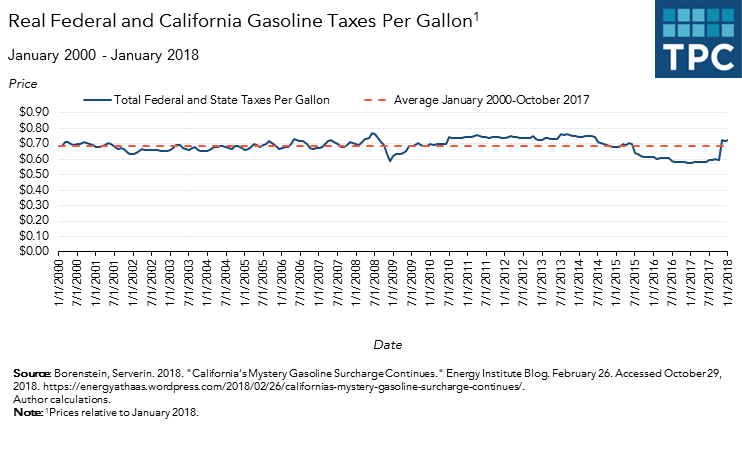 The federal excise tax on gasoline has remained fixed at 18.4 cents per gallon since 1993. Through inflation, by November 2017 the real value of that tax had fallen by nearly 60 percent.

California’s story is much more complicated. Prior to 2010, California drivers paid an 18 cent per gallon excise tax as well as 8.25 percent state sales tax and local sales tax on gasoline and 1.4 cents per gallon tax used to fund clean ups of old gas station sites with leaking underground fuel tanks. In that year, California increased the tax dedicated to clean-ups to 2 cents per gallon. But more importantly, it enacted a “tax swap” that reduced the gasoline state sales tax to 2.25 percent but added a second, price-based, excise tax of 17.3 cents per gallon (for a total of 35.3 cents per gallon). The trade-off was intended to raise about the same amount of money as the old system but since the new excise tax component is based on the price of gasoline, it is adjusted each July to retain that revenue neutrality.  At first the price-based excise tax was slowly raised as gasoline prices increased, with the combined tax hitting 39.5 cents in July 2013. But this component of the tax dropped as gasoline prices dropped. In 2014, the combined taxes were reduced to 36 cents, cut again in 2016 to 27.8 cents, and raised to 29.7 cents in 2017, when gasoline prices bumped back up.  This was the situation when California legislatively raised the gasoline excise tax by 12 cents per gallon, raised diesel fuels taxes, and raised vehicle registration fees.  And these legislated increases are what prompted Proposition 6, which would largely undo them.

California also imposes several implicit taxes that raise the price of gasoline through environmental regulation. Unlike direct motor fuel taxes, these implicit taxes do not generate revenue. In fact, by creating incentives to reduce gasoline consumption, they may cut excise tax revenue, even as they provide environmental benefits.

For example, for more than two decades gasoline sold in the state is reformulated to reduce smog-forming emissions, which raises the price by about 10 cents per gallon, according to UC Berkeley professor Severin Borenstein. In 2010, the state also imposed a low carbon fuel standard that requires producers of gasoline and other petroleum-based fuels to gradually reduce the “carbon intensity” of their products each year through 2020. This may add about 4 cents a gallon to the price of gasoline (although some believe that may have increased recently.)

Finally, in 2013 California implemented a cap-and-trade system limiting greenhouse gas emissions. It was first applied to power and industrial plants but was extended to fuel producers in 2015. According to Borenstein, this effort has raised gasoline prices by an additional  9 cents per gallon.

In April 2017 California Governor Jerry Brown signed into law a plan to fund road and bridge repairs, among other things. It raised the base excise tax on gasoline by 12 cents per gallon starting November 1, 2017, and it would cut the price-based excise tax to 17.3 cents per gallon starting in July 2019. Diesel fuels taxes were nearly doubled in this legislation.  The excise taxes will be adjusted for inflation starting in 2020. The law also created a transportation improvement fee based on the market value of a registered vehicle. Opposition to these tax hikes led to Proposition 6, which would overturn the law.

California’s bewildering array of frequently changing explicit and implicit taxes has made it very difficult for people to understand how much they are paying in taxes when they purchase gasoline, even though gasoline prices are among the most well-known prices for consumers. Using data made available by Professor Borenstein I found that the real burden of federal and state gasoline taxes is only slightly above its long-run average after the effects of last year’s legislation are factored in.

Perhaps if California could simplify its gas tax regime, its residents would realize what they are paying and for what. This could make the levies less unpopular.