There are some taxing questions on 2016 ballots

On Election Day, voters in 11 states will answer ballot questions on big tax issues. Most will choose whether to raise taxes, largely earmarked for health care or education, others will weigh in on new marijuana taxes, and Washington residents will decide whether to impose a first-in the-nation carbon tax. Here are the key tax ballot initiatives to watch on Tuesday: 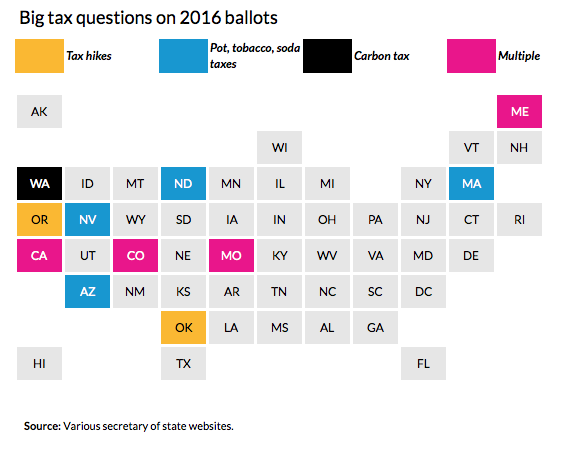 Washington voters will decide whether the Evergreen State should impose the nation’s first carbon tax. If Initiative 732 is approved, Washington’s tax on each metric ton of carbon dioxide emitted would start at $15 in 2017, rise to $25 per ton in 2018, and then increase by the rate of inflation plus 3.5 percent annually. The levy is expected to raise roughly $2 billion annually in the first few years.

Tax hikes for schools, health care, and other spending

Colorado’s Amendment 69 would impose a new 10 percent income tax to fund a comprehensive public healthcare system for the state (ColoradoCare). If passed, one third of the tax on wage income would be paid by employees and two thirds by employers. Most non-wage income would be subject to the full 10 percent tax. Once fully implemented, the new tax would raise roughly $36 billion annually. By comparison, the state’s entire FY2017 budget totaled $27 billion.

Voters in Oregon (Measure 97) are weighing whether to increase the state’s corporate minimum tax from a flat fee (e.g., corporation with $100 million or more in sales pays $100,000) to 2.5 percent tax on sales in excess of $25 million. Smaller businesses would still pay the lower, flat fees they do today. That might not sound like a big change, but the new tax would generate $3 billion in annual revenue—or one-third of Oregon’s general fund. Education advocates and major corporations like Amazon and General Motors are engaged in a contentious debate over the measure.

Californians and Mainers are voting on income tax hikes on high-income residents. California’s Prop 55 would extend higher income tax rates passed in 2012 (Prop 30) through 2030. They’re currently set to expire in 2018. Prop 30 added three new tax brackets on income above $263,000 for single filers and $526,000 for couples, and pushed the top rate from 9.3 percent to 12.3 percent. (Those with income over $1 million also owe a 1 percent surtax). The revenue would go to the state’s general fund.

Maine’s Question 2 would add a 3 percent surtax on income over $200,000, raising its top tax rate from 7.15 percent to 10.15 percent. (The measure would reverse recent income tax cuts.) The new revenue would be dedicated to education spending. Supporters of both initiatives argue the revenue is desperately needed given tight budgets, while opponents say tax rate hikes would make the states less economically competitive (a sentiment that is real even if evidence is lacking).

Oklahomans also are deciding whether to raise taxes to fund education. However, in their case, Question 779 would boost the state’s sales tax from 4.5 percent to 5.5 percent. The state is desperate for revenue after making big individual income tax cuts and seeing depressed natural resource related revenue.

Missouri’s Constitutional Amendment 4 goes in a different direction. It would not change sales tax rates, but it would lock in the state’s tax base by barring the legislature from taxing any services not currently taxed. For example, if you go to the dry cleaners in Missouri today you do not pay sales tax on the transaction, and if the amendment passes you never will. Supporters are mostly industries that want to keep their sales tax-free but nearly all tax experts argue for expanding the tax base.

Voters in five states will vote on legalization and taxation of marijuana: Arizona, California, Maine, Massachusetts, and Nevada. (Another four are asking about medicinal marijuana; but there are no big tax ramifications.) If approved, Arizona, California, and Nevada would levy a 15 percent excise tax on marijuana purchases, Maine would levy a 10 percent tax, and Massachusetts a 3.75 percent tax (the state’s lieutenant governor and legislature are already talking about raising the rate if voters approve the ballot question). The California levy could raise upwards of $1 billion annually.

Votes in three states will decide whether to raise tobacco taxes. Missouri voters get two questions: Amendment 3 would raise roughly $300 million annually, earmarked for early childhood education, by increasing the cigarette tax rate from $0.17 per pack (the lowest in the nation) to $0.77 over four years. Proposition A would raise roughly $100 million annually, earmarked for transportation, by hiking the rate to $0.40 by 2021 and increasing taxes on other tobacco products. State officials are not sure what would happen if voters approve both initiatives.

Voters in Colorado will decide whether to support Amendment 72 and raise their state’s per-pack rate from $0.84 to $2.59. North Dakotans will consider Measure No. 4, which would raise their tax from $0.44 per pack to $2.20. Californians could increase their cigarette tax from $0.87 to $2.87 per pack if they support Proposition 56. The ballot initiative would also apply the tax to e-cigarettes for the first time. These are all big tax increases: the median tax rate in 2016 was $1.53.

Finally, voters in Albany, Oakland, and San Francisco, California and Boulder, Colorado will decide whether to join Berkeley and Philadelphia in taxing soda. The California cities would match Berkeley’s 1 cent per ounce tax while Boulder would levy a 2 cents per ounce tax.

Thanks to all these initiatives, we should know a lot more next week about voters’ appetite for tax hikes.

In this photo taken Friday, Nov. 2, 2012, campaign signs for Proposition 30, Gov. Jerry Brown's tax hike initiative and against Proposition 32, which would limit campaign donations by unions and corporations, are seen in Sacramento, Calif. While California was off the presidential election map this year, it's election season was not overlooked by deep-pocketed interests. Campaigns for and against the 11 initiatives on the November ballot have raised an astonishing $350 million so far. (AP Photo/Rich Pedroncelli)