With Pennsylvania’s presidential primary today, both Hillary Clinton and Bernie Sanders weighed in on the proposal. As The Upshot reported Friday, Clinton supports the tax, much of whose revenue is earmarked for early childhood education programs. It’s a laudable goal, especially combined with the evidence of high returns to investment in early childhood education.

But, as Sanders fired back, so-called “sin taxes” tend to be quite regressive, falling most heavily on low-income families. True? If so, is it a good argument against the tax?

On the other hand, tax rates of less than one-fifth of one percent are not very big. Even with Philadelphia’s three-cent tax, the lowest quintile might pay an extra $75 per year, all else equal. For some households $1.50 a week makes a real difference, but for most it probably doesn’t. 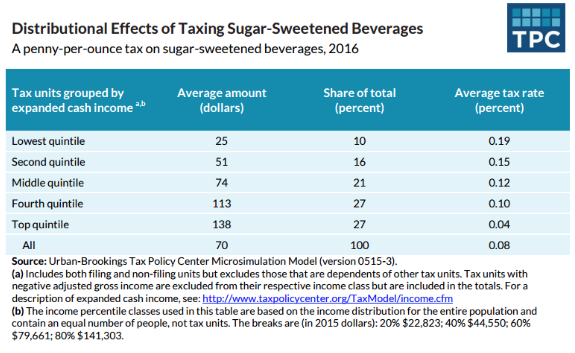 But, while Sanders’s critique is technically right, there might be more important issues to consider. For example, as Donald Marron wrote recently:

Another issue is how well sugar consumption tracks potential health costs and risks. If you are trying to discourage something harmful, taxes work best when there is a tight relationship between the “dose” that gets taxed and the “response” of concern. Taxes on cigarettes and carbon are well-targeted given tight links to lung cancer and climate change, respectively. The dose-response relationship for sugar, however, varies across individuals depending on their metabolisms, lifestyle, and health. Taxes cannot capture that variation; someone facing grave risks pays the same sugar tax rate as someone facing minute ones. That limits what taxes alone can accomplish.

In addition, people may switch to foods and drinks that are also unhealthy. If governments tax only sugary soda, for example, some people will switch to juice, which sounds healthier but packs a lot of sugar. It’s vital to understand how potential taxes affect entire diets, not just consumption of targeted products.

In other words, if many of the people affected by the new tax have only a “loose” relationship between sugar consumption and poor health, the tax might not buy much in terms of health improvements. That alone may not be a problem, so long as the tax still raises new revenue for early childhood education.

But its total revenue effects are uncertain. If people are highly responsive (and they tend to be) to the price increase—over $4 for a 12-pack of soda—they may just switch to other, non-taxed beverages. In other words, such a high tax may just drive people away from soda and similar beverages, failing to raise much new revenue. It is also possible that people may simply go outside of Philadelphia to buy their soda.

On the other hand, Philadelphia predicts that it’ll raise almost $100 million annually. Even if that guess is twice as high as reality, the city would raise $50 million in new revenue, which would buy considerable new early childhood education and other services.

Perhaps the soda tax’s uncertainty is in itself a good reason to support it. Such taxes are growing in popularity and the sooner we have real data on them, the sooner we can understand with certainty their real-world effects.

This article was originally published on The Urban Institute's blog, Elevating the 2016 Debate​.