Still recovering from the Great Recession and grappling with troubling fiscal trends, state budgets are already causing headaches for governors and legislators across the country. Two-thirds of states enter the year with deficits, and 32 states spent less in real terms in 2016 than 2008. But states must also shift their attention to the gathering fiscal storm clouds in Washington, DC.

Last Thursday, four experts in state fiscal policy—Joe Henchman from the Tax Foundation, John Hicks from the National Association of State Budget Officers, Nick Johnson from the Center on Budget and Policy Priorities, and Urban’s Kim Rueben— discussed the issues that will keep statehouses busy this year at an Urban Institute panel. (You can watch video of the event here.) All four state experts mostly talked about the federal government. And for good reason.

As a new State and Local Finance Initiative brief, “State Budgets in the Trump Era,” explains, both President Donald Trump and congressional Republicans back major changes in federal fiscal policy. Because most state income tax systems are tied to federal rules, and one-third of state expenditures are federally funded, changes in Washington reverberate in all 50 statehouses. Hicks said the future for states is “cloudy with a chance of storms.” The question is will states merely get wet or will they be swept away in a flood. 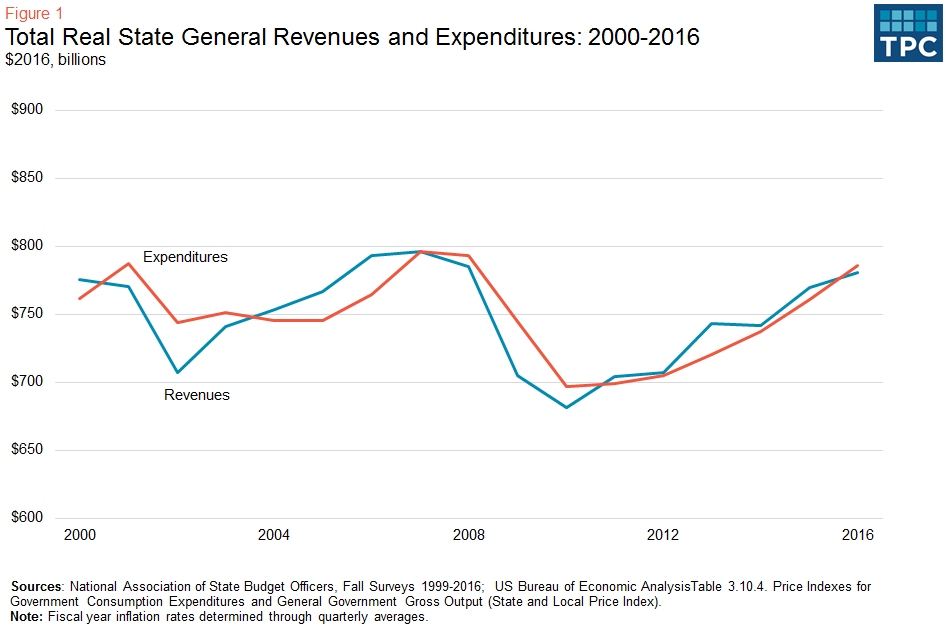 Take federal tax reform. Trump and House Republicans have called for major changes to the federal tax code, though with significant differences. Some of their ideas, such as eliminating tax preferences, would increase state revenues. Others, such as cutting taxes on investment income, would hurt state revenues. Still others, such as eliminating or curbing the state and local tax deduction could force states to rethink the way they raise money.

But the biggest consequence of federal tax changes may come to state spending because declines in federal revenues could also result in fewer federal transfers to state and local governments. As Henchman said, turning plans into law forces tradeoffs, specifically on growth, distribution, and deficits. While many GOP lawmakers and some Trump advisers insist any tax bill will not add to the debt, the Tax Policy Center estimates that as written both plans would reduce revenue: $6.2 trillion for Trump and $3.1 trillion for the House GOP over the next decade. Losses of that magnitude will likely lead to spending cuts. And with Trump looking to increase defense spending, and pledging not to reduce Medicare and Social Security spending, the remaining possible program cuts would hit state budgets hard.

Even without big tax cuts, the GOP is likely to target domestic spending and aid to states. A shift in the federal-state relationship is not unprecedented, but the scale could be much bigger this time. As Johnson pointed out, the 1996 welfare reform turned a match program for state assistance to needy families into a block grant called Temporary Assistance for Needy Families (TANF). The law capped federal funds and gave states more flexibility in administering the program. But federal funding hasn’t kept pace with inflation so states now have less money (in real dollars). Further, states spend only a fraction of TANF funds on cash aid, choosing instead to fund other programs such as child care, worker training, marriage counseling, and higher education scholarships. These might be useful, but they don’t provide cash to many of the states’ neediest families.

But as Hicks explained, TANF is pennies compared with health care. Last year, 29 percent of total state expenditures (including federal funds) were for Medicaid. For comparison, TANF was closer to 1 percent. Changing Medicaid from a matching formula to a block grant, as both Trump and House Republicans have proposed, would completely alter state budgets.

Trump and House Republicans are also promising to repeal the Affordable Care Act, though they have reached no agreement on what will replace it. As Rueben noted, repeal could force states to choose between ending the Medicaid expansion—thus taking health insurance away from millions of people—or finding ways to cover the huge cost out of already tight budgets.

And there is more: Possible major changes in infrastructure, education, and other federal programs. Johnson said that rending the current partnership in all these areas would upend state budgets and the social safety net.

At the moment, no one knows exactly what the new administration and Congress will do. However, there is broad agreement that states need to recognize the uncertainty and prepare for a possible storm.