It’s budget season in most of the nation’s 50 states. This means governors are polishing State of the State speeches and finalizing plans for how to raise and spend roughly $2 trillion or 11 percent of GDP.

But why do state and local governments collect taxes and allocate spending the way they do? Why do they choose to spend money on, say, K-12 education instead of police officers? Or rely on a sales tax instead of an income tax? To help shed some light on these choices, the Urban Institute’s State and Local Finance Initiative (SLFI) has created a new interactive web feature. This tool breaks down spending per capita in each state so users can see how many people get a specific service and how much state and local governments spend per recipient. 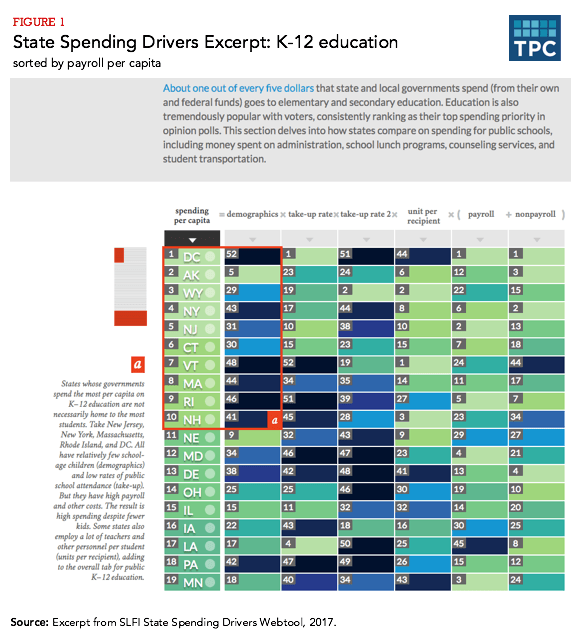 These budget decisions are incredibly important to any parent who has kids in public school, businesses looking to hire community college graduates, and taxpayers. They matter to those of us who commute on public roads or expect first responders to keep us safe.

Yet, as at the federal level, state and local voters don’t have a very good idea of where their tax dollars go and why. Although some states and localities have made these decisions more transparent, most e-budgets and citizen guides are just links to old-school pdfs that don’t look very different from the first public budgets produced at the turn of the 20th century.

SLFI’s tool is different. It starts by showing how many people are potentially eligible for a program. Then it shows how many actually get the service. This way users can see whether states have tough or flexible eligibility rules for, say, Medicaid. Or whether they set low tuition and fees so more people can attend a public college or university.

Our tool also provides information about human resources devoted to programs—the ratio of staff to participants of a program, and how much states and localities spend on salaries versus everything else. Finally, where we can, we report outcomes or what taxpayers get for their money.

New York spent about 60 percent more per state resident than the national average in 2012 (the last year for which high - quality data are available). However, the state had fewer kids as a share of the population and had a far bigger share of children in private schools. Why did it spend so much more? New York had more teachers and staff per student than nearly any other state. It also paid them more (figure 1).

Now look at California. It also had high payroll costs per employee. But it chose to employ fewer people in its public schools. Because labor was costly, they purchased less of it. That meant more expensive teachers with larger classes. Compared to New York, test scores were lower even after adjusting for student characteristics like poverty, English learner status, and other factors.

Our tool does not judge whether California ought to be more like New York, or vice versa. Rather, it shows how and why states make choices within their financial and demographic constraints. A state that spends more in one area will have less for other priorities, just like in your household budget, unless it brings in more revenue.

States also vary in their tax choices. For example, Washington derived about a quarter of its total state and local revenue from sales taxes in 2012 (and a similar portion today), while its neighbor Oregon collected no general sales taxes (along with Alaska, Delaware, Montana, and New Hampshire).

Voters can use the tool to decide whether they’d make different tradeoffs. And governments can make this kind of information – which, after all, they use to craft their budgets each year even if it’s not available on their websites – more widely available through a tool like ours. That could go a long way toward demystifying state and local budgets and inspiring either greater confidence in government or a rolling up of sleeves to make different policy choices.

Doesn’t that sound like a good way to kick off budget season?