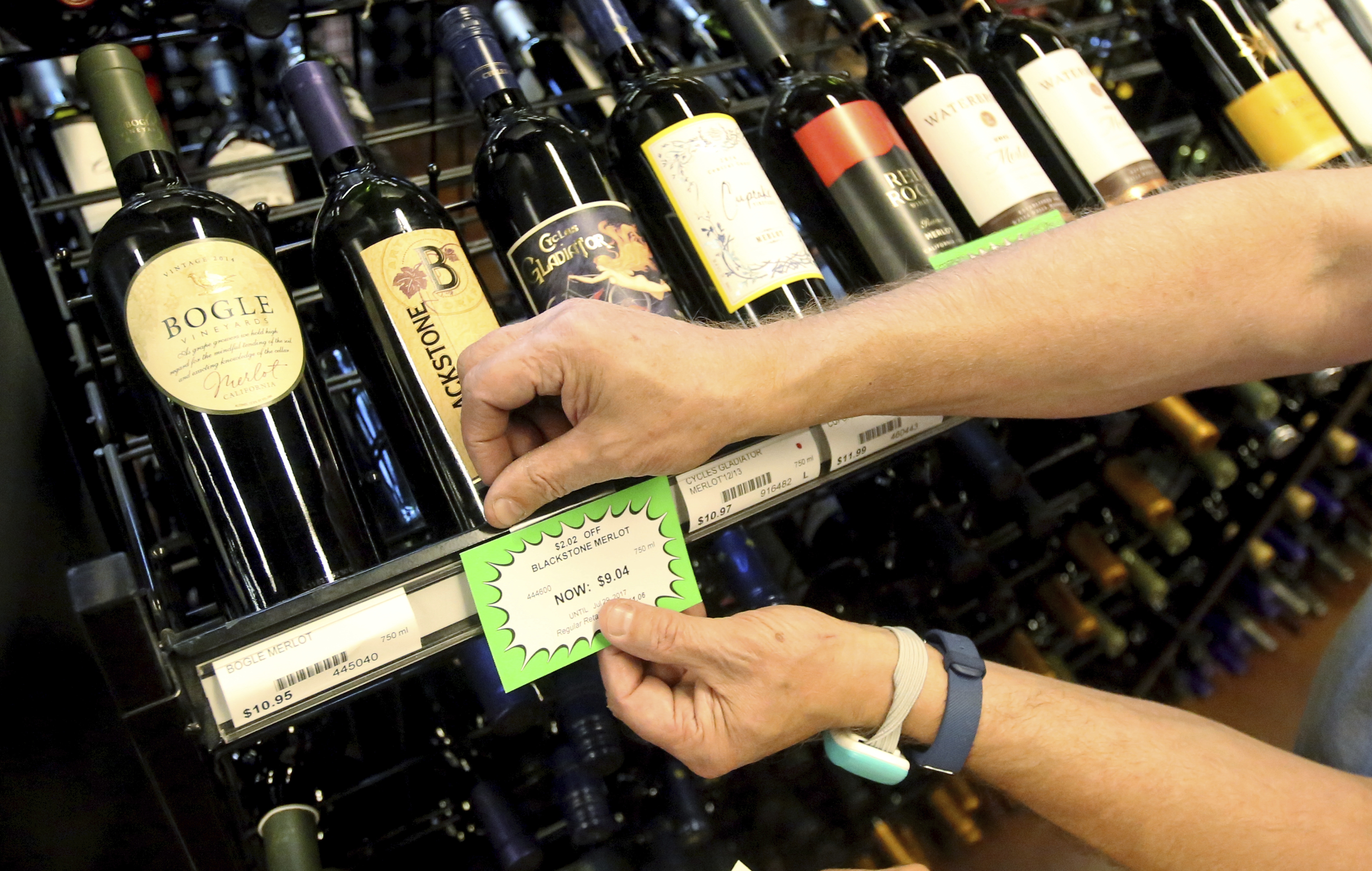 State Liquor Tax Rates Are Stuck In The Mud

With state governments struggling with budget problems, governors and their legislatures are searching for ways to raise funds without raising voter ire. Unlike personal income taxes or general sales taxes, boosting excise taxes – or sin taxes for the more dramatically minded – often fit the bill. States have increased cigarette taxes and introduced new taxes on sugar-sweetened beverages and marijuana, but have largely avoided tax hikes on one potential target: alcoholic beverages.

Between 2010 and 2017, 21 states increased their tobacco or cigarette taxes. Many others have enacted, or are at least considering, taxes on products like marijuana and sugar-sweetened beverages. But as they look for new sources of revenue, most states are ignoring excise taxes on alcohol. Over the same period, only Connecticut, Delaware, Louisiana, and Rhode Island increased their alcohol excise tax rates on beer, wine, or distilled spirits. One other, Washington State, created a new tax on alcoholic beverages when it privatized its liquor market in 2011 by phasing out state-owned liquor stores in favor of private sellers.

And this is not a new trend. After accounting for inflation, only Alaska, Hawaii, Illinois, New Mexico, and Washington (because of its new tax) have increased their alcohol excise taxes over the last 35 years. In other words, in 28 states and the District of Columbia, consumers are paying less in alcohol excise taxes today than in 1982 (after adjusting for inflation). When you look just at wine and beer, 38 states have seen a real decline in beer taxes and 37 in wine taxes. Why? It could be because distributors of alcohol are effective lobbyists or it could reflect popular preferences.

Want to see what alcohol taxes are in your state? We recently updated our dataset of beer, wine, and distilled spirit excise tax rates from 1982 to 2017. A quick note about the technicalities of taxing alcohol: States can levy taxes on alcohol per unit of the product produced (excise taxes that are incorporated in the product’s retail price) or based on value or the price of the product (sales taxes added at purchase). Our data focus only on excise taxes, and therefore report the rates per unit of the product produced (i.e., dollars per proof gallon) as on January 1 of each year.

The dataset excludes ordinary sales taxes that are imposed on alcohol and special sales tax rates that are applied to alcohol purchases. For example, our list of tax increases excludes a 2011 Maryland law that raised the state’s 6 percent general sales tax to 9 percent for alcohol. In addition, 17 states with government control of their liquor markets set prices and collect revenue directly (such as through state-run liquor stores), as opposed to levying taxes. 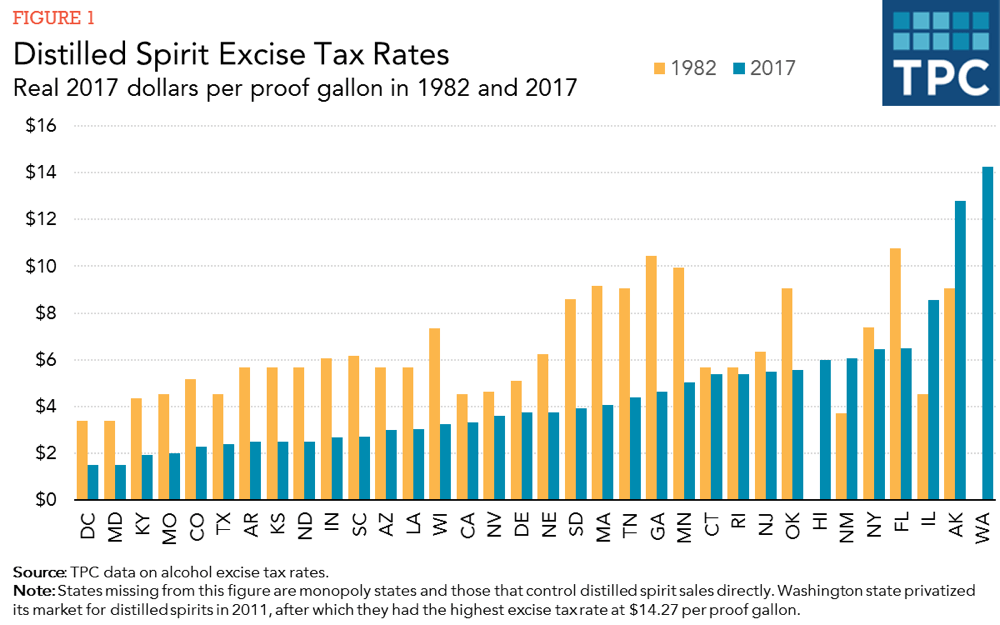 Overall, the median tax rates for all three types of alcohol (distilled spirits, beer, and wine) have dropped in real terms since the mid-to-late 1980s. This translates into a decline in real revenue raised from alcohol taxes–a trend not seen with other excise taxes. State gas tax revenue increased in the late 1980s, and tobacco excise tax revenues jumped in the early 2000s as numerous states hiked tax rates on cigarettes, though revenue has declined in recent years. In contrast, alcohol excise tax revenue dropped for most of this time. The gradual increase in recent years was due to those few states that substantially increased their tax rates. 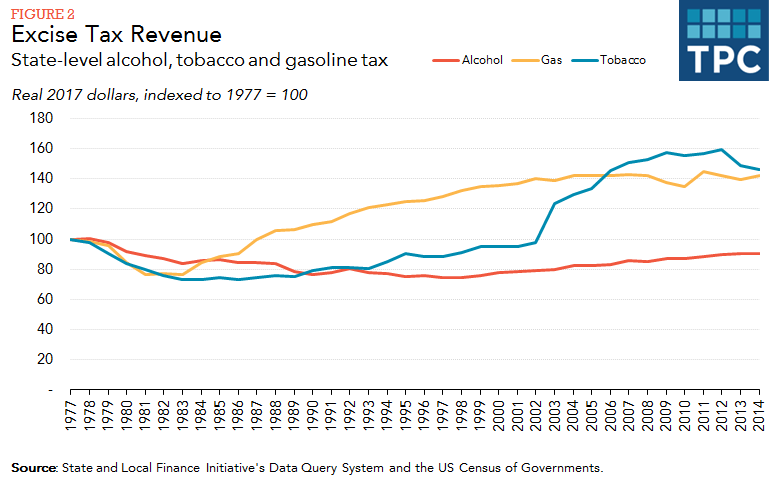 Government can adjust these taxes for reasons other than revenue. For instance, states may raise  tobacco taxes to achieve the public health goal of reducing smoking or create soda taxes to  discourage consumption of sugar-sweetened beverages. Similar issues arise when states tax alcoholic beverages.

State excise taxes also raise numerous issues of tax avoidance because consumers can travel to nearby jurisdictions in search of lower prices associated with lower levels of taxation. However, since this incentive applies to cigarettes as well as alcohol, it does not fully explain why policymakers have chosen to increase taxes on smokers but not drinkers. Understanding why states tax certain “sins” and not others is important, both for studying the revenue and behavioral effects of taxation at the state level.

A worker at a state liquor store changes prices on wine, liquor and higher-alcohol beer, after closing to the public Friday, June 30, 2017, near downtown Salt Lake City. Higher liquor prices and other changes under a broad new Utah liquor law will take effect Saturday, along with a highway funding bill and a test program allowing people convicted of drunken driving to avoid having their driver's license suspended. (AP Photo/Rick Bowmer)