A Trump Crack Down on Legal Marijuana Would Hurt State Budgets

If the Trump administration ends legal marijuana sales in America, an idea Attorney General Jeff Sessions supports, states collectively could lose billions of dollars in tax revenue. It's another example of states making fiscal decisions only to have them potentially upended by the federal government.

Taxing marijuana, like other "sin" taxes (e.g., alcohol, cigarettes), raises a host of questions, including how much to tax and how to use the revenue. And there's the critical question of whether or not a state wants to legalize the controversial drug at all. But for those states that want it, marijuana tax revenue is there for the taking.

Some states are already using the revenue from taxing marijuana to fund public services. Marijuana is legal and sales are taxed in Alaska, Colorado, Oregon, and Washington. Marijuana tax revenue helps fund school construction in Colorado, education in Oregon, and Medicaid in Washington. (Alaska only recently implemented its tax and has little revenue so far.)

Marijuana is also legal in the District of Columbia, but the District cannot tax sales because of its unique relationship with Congress (which vetoed taxable sales in DC). Voters in four states—California, Maine, Massachusetts, and Nevada—approved legal and taxable marijuana in November 2016 ballot initiatives, and their governments are in the process of setting up regulatory and tax regimes (and thinking of how to use the revenue). 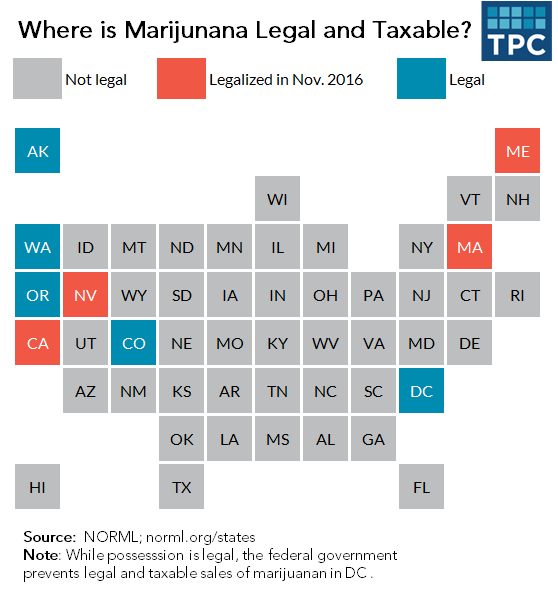 And the revenue can be substantial. Washington State expects to collect $725 million over the next two years from marijuana taxes. Colorado estimates pot taxes will bring in roughly $150 million this year (and another $50 million in sales tax on the transactions). Oregon’s marijuana tax raised roughly $60 million last year. California is planning on eventually collecting $1 billion in marijuana taxes annually.

These dollars are (or could potentially be) critical to states facing tough fiscal tradeoffs. Nearly two-thirds of states entered 2017 with a budget shortfall, and federal changes proposed by the Trump administration and congressional Republicans could exacerbate the situation. Their proposed reforms (specifically cuts to Medicaid and health care more broadly) would hand states more control over programs, but also reduce federal financial support. If enacted, these proposed changes would force states to do one of the following: cut programs, take money from somewhere else in the budget, or raise taxes (because states, unlike the federal government, must balance their budgets each year).

Marijuana taxes won’t fix state budget problems. Oregon has a nearly $2 billion deficit despite its pot tax. However, if a state collects millions—if not hundreds of millions—from marijuana taxes, that’s spending it doesn’t need to cut or other taxes it won’t have to raise.

But according to New York University public policy professor Mark Kleiman, the Trump administration "could destroy the legal [marijuana] market overnight." Marijuana is illegal under federal law, but the Obama administration choose not to intervene when states began legalizing the drug. Among other options, the attorney general could sue states to stop their regulated systems—and thus end taxable sales. (The Trump administration could also bar states from allowing the sale of medicinal marijuana, but these transactions do not generate much tax revenue.)

The federal government taking a possible revenue tool off the table, even as it proposes cuts in federal support for states, would be unfortunate for states considering marijuana taxes and possibly financially devastating for states already planning spending that assumes those tax dollars continue.

And states don’t even know if or when a change is coming. It’s a disconcerting but familiar situation for states that still don’t know exactly what to prepare for in this new political era.

In this Wednesday, July 29, 2015 photo Aimee Ramirez, of North Providence, R.I., a patient advisor at the Thomas C. Slater Compassion Center, completes a marijuana sale transaction at the center, in Providence. Rhode Island officials say revenues from taxing and regulating medical marijuana have been lower than projected in the two years that dispensaries have been legal. (AP Photo/Steven Senne)