More than Medicaid: The Full Cost of ACA Repeal and Replace for States

Congressional plans to repeal and replace the Affordable Care Act have governors worried – and with good reason. Although proposals continue to evolve, states stand to lose upwards of $100 billion each year in federal Medicaid funds under the most recent Senate leadership proposal and a House-passed bill.

But that’s not the whole story. Whatever emerges from current negotiations is also likely to restructure tax credits and  subsidies now available under the ACA to help low- and moderate-income people purchase health insurance and defray deductibles, copayments, and other out-of-pocket costs.

Taken together, in 2022, these changes would reduce federal funds to states and their residents by nearly a third relative to current law according to my Urban Institute colleagues. And things would get even worse for states after that because tighter caps on federal Medicaid spending start in 2025.

States that opted to expand their Medicaid programs as encouraged by the ACA would see the biggest funding reductions. But states like Florida and Maine that did not expand Medicaid would not be far behind. They’d be hit hard by reductions in federal subsidies to help people purchase insurance in the individual market. 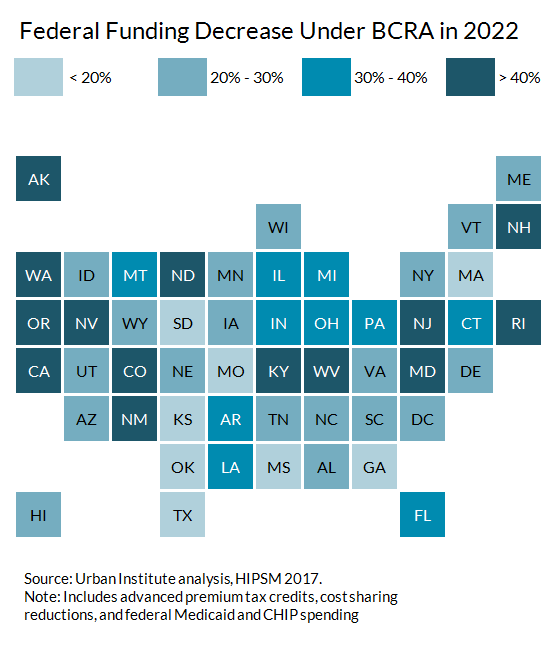 And it’s not just the loss of federal funds that would hurt states. Uninsured residents can burden state budgets because they consume more uncompensated hospital care as well as mental health and substance abuse services. Florida and Maine would see their uninsured populations increase 60 percent and 80 percent under the Senate plan, according to the Urban Institute study. Expansions states like Arkansas, Kentucky, and West Virginia would see their uninsured populations increase more than 200 percent.

Of course, there’s a lot we don’t know about what will emerge from Congress and how states will respond. For example, will states that expanded Medicaid under the ACA continue to do so? Nine states have already said no, enacting trigger laws that turn off their expansions if enhanced federal payments disappear, as contemplated in the Senate and House plans.

Even states that extended Medicaid to more non-elderly adults before the ACA (Arizona, Delaware, Hawaii, Maine, Massachusetts, New York, and Utah) may be uncertain about what they’ll do if Congress makes big Medicaid cuts. State revenue growth has been anemic and half of all states enacted mid-year budget cuts last year – an unusually high figure in good economic times.

More broadly, as the federal government shifts from matching state Medicaid spending dollar-for-dollar (and sometimes more) to capping reimbursements based on enrollments and inflation, how will states make up lost funds? How will they contend with so-called equity provisions to bring high-cost states in line with national averages despite differences in their underlying populations and costs?

What will happen to state employment—and tax revenue—if decreases in Medicaid and increases in the uninsured hurt large employers such as hospitals and other safety net providers? How will states respond to provisions of the Senate leadership plan that provide higher payments to hospitals that treat a disproportionate share of uninsured and Medicaid patients only if the state did not expand Medicaid?

These questions are only the tip of the iceberg. The House bill and the Senate leadership plan would also restore much of the authority of state regulators to approve state-specific insurance policy designs for the individual health insurance market. They would allow states to opt for a block grant instead of an enrollment-based cap for non-disabled, non-elderly, non-expansion adults covered by Medicaid (such as pregnant women and parents). The block grant would provide less money over time but more discretion over benefits and eligibility. This enhanced flexibility may lead to more innovation but also more gaming as with welfare reform in the mid-1990s.

States will play a key role in any plan to repeal and replace ACA and will have to confront the significant budgetary consequences of Congress’s choices. State actions will affect the size of the uninsured population as well as trajectory of federal and state spending. What will they do? Even the experts at Urban and the Congressional Budget Office can only make informed guesses. As my Tax Policy Center colleague (and former CBO director) Rudy Penner has noted, states themselves don’t yet know how they will respond to a still murky legislative future.