The Senate Finance Committee’s version of the Tax Cut and Jobs Act would cut taxes by an average of $1,300 in 2019, according to a new analysis by the Tax Policy Center. But by 2027, after nearly all of the individual tax changes in the panel’s bill are scheduled to expire, the average tax cut would fall to just $340, and half of households would pay more than if Congress had never changed the law at all.

The effects of the Finance Committee’s bill would vary widely, within income groups and from year-to-year. On average, higher-income households would get larger tax cuts than those with low- and moderate-incomes. But the averages mask those disparate and idiosyncratic effects. TPC’s analysis excludes the effects of the Finance panel’s proposal to repeal the Affordable Care Act’s individual mandate.

Tax cuts would grow substantially once the bill’s corporate income tax rate reductions cuts take effect in 2019. But over time, total tax cuts would begin to shrink as key elements of the plan expire and the bill’s less generous method for adjusting the tax code for inflation slowly raises individual income tax liability. 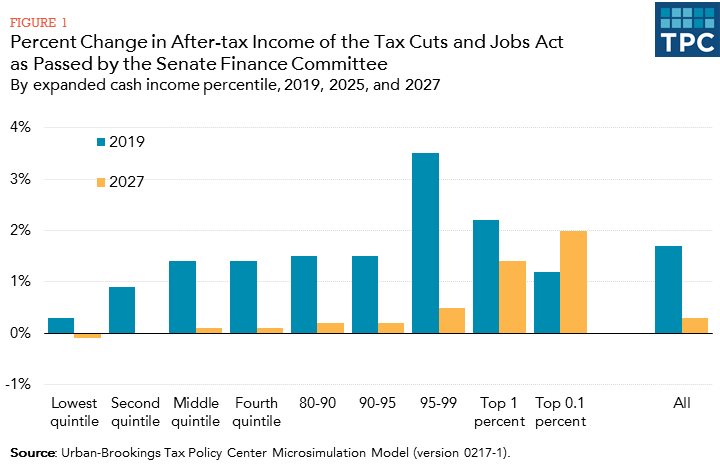 The Finance bill is filled with phase-ins and sunsets that change its effects from year-to-year. Individual income and estate tax changes begin in 2018 but nearly all those revisions---both tax cuts and tax increases—would expire after 2025. The one exception: a permanent shift to a less generous method of indexing the tax code for inflation that would raise taxes for households over time.

Some corporate tax increases begin in 2018. Corporate tax rate cuts don’t kick in until 2019, but would remain on the books indefinitely. The bill’s proposal to provide bonus depreciation for business investment would begin in September, 2017 and expire in 2022.

These corporate tax changes would benefit households in all income groups. However, those with the highest incomes—including investors and corporate executives—would benefit the most.

Even among high-income households the patterns are unusual and complex. For example, in 2019, the biggest beneficiaries would be households in the 95th to 99th percentiles—those making between $308,000 and $746,000. Thanks mostly to tax rate changes and repeal of the Alternative Minimum Tax, the bill would boost their after-tax incomes by 3.5 percent while the top 1 percent would receive an average tax cut of 2.2 percent of their after-tax income.  While the highest-income 0.1 percent would get the biggest tax cut in dollar terms—an average of nearly $86,000--their tax benefit as a share of after-tax income would be half as much—about 1.2 percent. One reason: A provision that bars individuals from reducing taxes by offsetting personal income with business losses.

Because the bill would turn off nearly all of its individual and estate tax changes after 2025, overall tax benefits would shrink for all income groups.  On average, households making $93,000 or less would lose nearly all of their tax cuts by 2027 and end up paying roughly the same amount of tax as if the TCJA had never happened.

TPC’s analysis shows roughly the same pattern as an analysis by the congressional Joint Committee on Taxation. However, while JCT included the effects of the Finance panel’s proposed repeal of the ACA’s individual mandate, TPC excluded those provisions from its distributional analysis.

Proponents of the Finance panel’s tax plan aggressively promote it as a tax cut aimed at the middle-class and its critics argue that business and the wealthy would get all the benefits while middle-income households would get nothing. However, the story is much more complicated. On average, high income households would do better than those with low- and moderate-incomes, but the fate of individual households will depend on where people live, how they make their money, how many kids they have, and what year we are looking at.