Sounds great, right? Well, unfortunately for those Pennsylvania voters, this is one of those too good to be true situations. Pennsylvanians will pay property taxes next year and well into the future. And if the state wants to provide homeowners tax relief, they probably need to do a lot more thinking and work.

To start, the amendment doesn’t end property taxes. This is the convoluted part: The initiative, which was an amendment to the state’s constitution, merely empowers the state government to pass legislation that would give local governments (the ones who actually levy property taxes) the authority to exempt up to 100 percent of an owner-occupied property’s value from the tax. Local governments would then need to enact the exemption.

Pennsylvania’s state legislature might pass such a law. The legislature has debated several bills aimed at completely eliminating property taxes over the past few years, and big property tax reductions have been at the center of the state’s political discussion for decades.

But the problem policymakers have never solved is how to replace the lost revenue. Pennsylvania’s property tax provides its governments about $19 billion per year—or 17 percent of combined state and local general revenue. Making matters more complicated, in Pennsylvania, as in most of the country, property taxes mostly go to supporting elementary and secondary education, providing more than two-thirds of local school funding. A proposal aimed at slashing school budgets probably wouldn’t have done as well as tax cuts on the ballot. 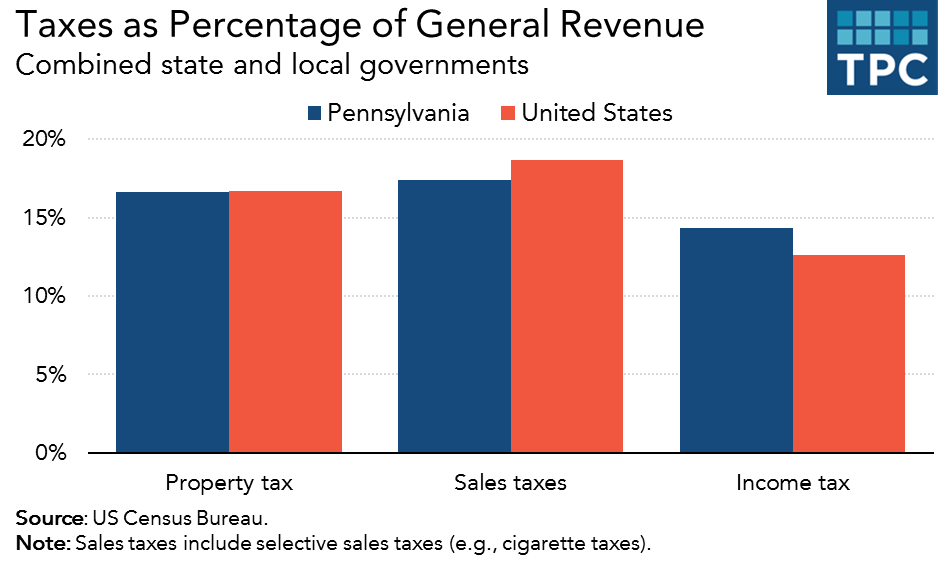 While other proposed legislation in Pennsylvania would have eliminated all property taxes, this ballot initiative would only end the tax for homeowners. That means commercial and rental property owners would still pay property tax. Still, homeowners account for roughly half of Pennsylvania’s property tax revenue, so it doesn’t take a budget analyst to figure out that if you substantially reduce a major source of revenue you need to substantially raise another one or make large offsetting budget cuts. This would be challenging for any state, but  especially in one that has struggled to simply pass budgets in recent years.

A far better option is a circuit breaker that provides relief to residents with property tax liabilities that exceed  a specified percentage of their income. Unlike the homestead exemption, that program can also be made available to renters who pay property taxes indirectly through their rent.

Pennsylvania already has a circuit breaker but it’s currently limited to residents ages 65 and older with annual income less than $35,000, and the maximum rebate is capped at $650 per homeowner. Expanding it to others who need the assistance and/or increasing the cap could better achieve the stated goals of the amendment at a lower cost.

Another wrinkle is something called uniformity of taxation.

Pennsylvania’s constitution requires all income and wealth (such as property) be taxed at the same rate. The recent ballot initiative, though aimed at eliminating property taxes, might have been necessary to expand the circuit breaker program but that’s debatable. What we do know is that the state constitution’s requirement of tax uniformity has been holding up a lot of tax reform efforts. The uniformity requirement prevents Pennsylvania from having more than one income tax rate and prevents localities from taxing commercial properties at higher rates than residential properties. If tax reform options along these lines were available, both changes could help pay for residential property tax relief.

Given the constant push for major property tax reforms, the state should step back and examine its entire system, possibly through a tax commission. Gimmicks to “eliminate” property taxes without addressing how to maintain support for services nor addressing other budget ramifications are not steps toward improving the tax system. They’re not even providing tax relief.