The House Version Of The TCJA Would Modestly Boost The Economy

The House-passed version of the Tax Cuts and Jobs Act (TCJA) would benefit the economy modestly over the next 20 years but by far less than President Trump has promised. According to a new analysis by the Tax Policy Center, the tax cut would increase economic output by 0.6 percent in 2018. However, this effect would shrink over time and the bill would boost the level of output by 0.3 percent by 2027 and by only by 0.2 percent in 2037. 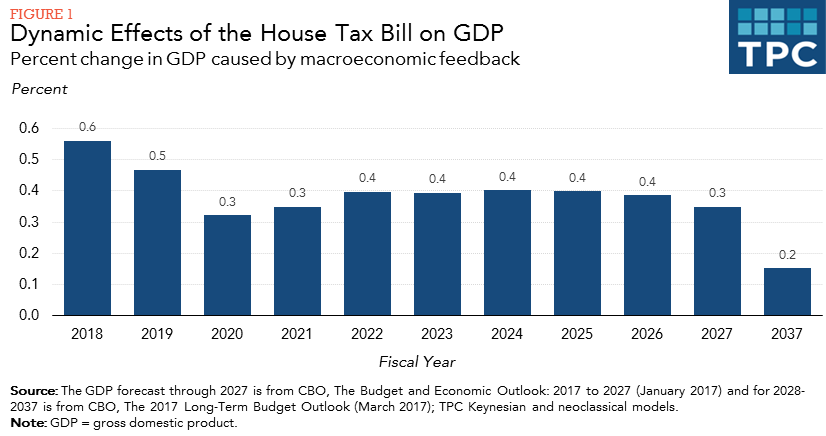 By raising after-tax incomes of individuals in the short term, the House’s tax cut would increase consumer demand slightly for goods and services. At the same time, a provision to temporarily allow businesses to more rapidly deduct their cost of capital spending would boost investment in the short-term. However, these effects would be muted since the economy is already at or near full-employment.

However, the bill would raise the level of debt by about $1.5 trillion in 2027 and by about $3.8 trillion in 2037. That additional government borrowing would lead to higher interest rates that, in turn, would reduce private investment. Over time, investment would fall below levels that would occur without the tax bill.

How would these economic changes affect tax revenues? TPC’s dynamic estimate of the House bill finds very modest effects. Over the 2018-2027 period, macroeconomic feedback would trim the total net revenue loss by roughly 10 percent, from about $1.4 trillion to $1.3 trillion.