Permanently Extending the Tax Cuts and Jobs Act, President Trump Would Cut Taxes by $1.1 Trillion through 2030

During each presidential election, the Tax Policy Center analyzes the tax policies of the two major candidates. This year, TPC estimated the effects of Democratic presidential candidate Joe Biden’s plans twice; in March and again earlier this month to reflect tax provisions the former vice president announced since TPC completed its first analysis.

The Trump campaign has not released a detailed tax plan, and its representatives did not provide sufficient information for TPC to estimate the effects of proposals listed on the campaign website. However, TPC has estimated the administration’s fiscal year 2021 budget proposal to permanently extend the Tax Cuts and Jobs Act’s (TCJA) individual income and estate tax provisions that are scheduled to expire at the end of 2025.

Extending these TCJA provisions would reduce federal revenues by about $1.1 trillion from 2021 through 2030. Nearly all the reductions would occur after 2025, and the extension would reduce federal revenues by another $3 trillion from 2031 through 2040 (around 0.8 percent of gross domestic product). About 95 percent of the loss would come from lower individual income tax receipts, while the remainder would come from changing the estate and gift exemption amounts.

Retaining some TCJA provisions would cut income taxes while retaining others would raise them. For example, compared to a baseline where all the TCJA tax changes expire, retaining the 2017 law’s lower individual income tax rates would reduce revenue by about $173 billion in 2027. But that would be nearly offset by the $168 billion generated by continuing to eliminate the personal exemption. Increasing the standard deduction would reduce revenue by about $100 billion in 2027, but the revenue loss would be roughly offset by keeping the TCJA changes to itemized deductions, such as the $10,000 annual cap on the deduction for state and local sales taxes. 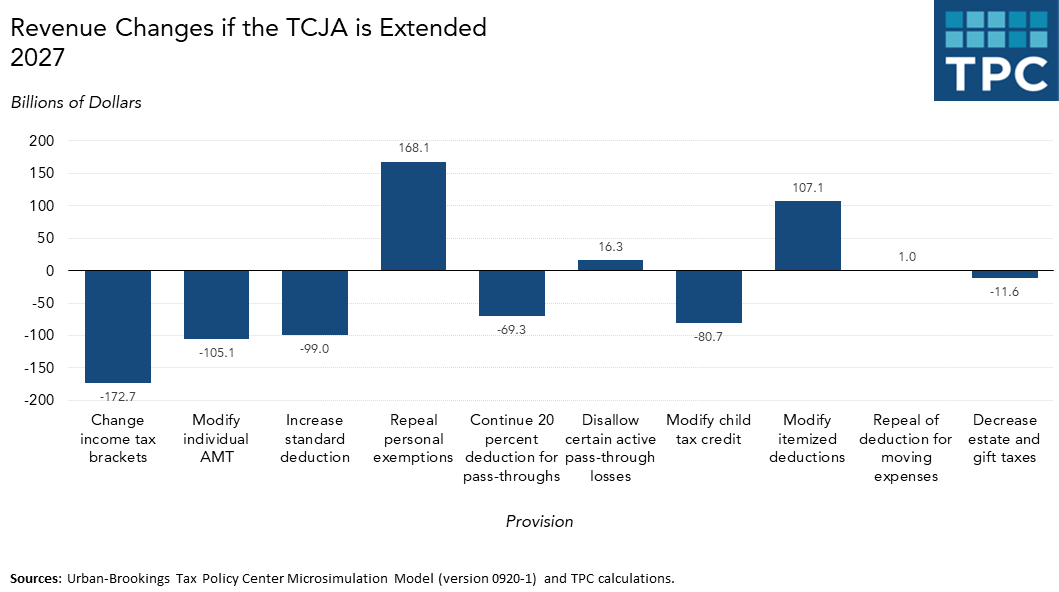 TPC estimates that extending the individual and estate tax provisions of the TCJA would reduce taxes, on average, by about $1,460 in 2026—about 1.5 percent of after-tax income. Taxes would decline for all income groups, but taxpayers in the 95th to 99th percentile of income—between $344,500 and $829,000—would receive an average tax cut of $13,120. Their 3.1-percent increase in after-tax income would be the largest of any income group. 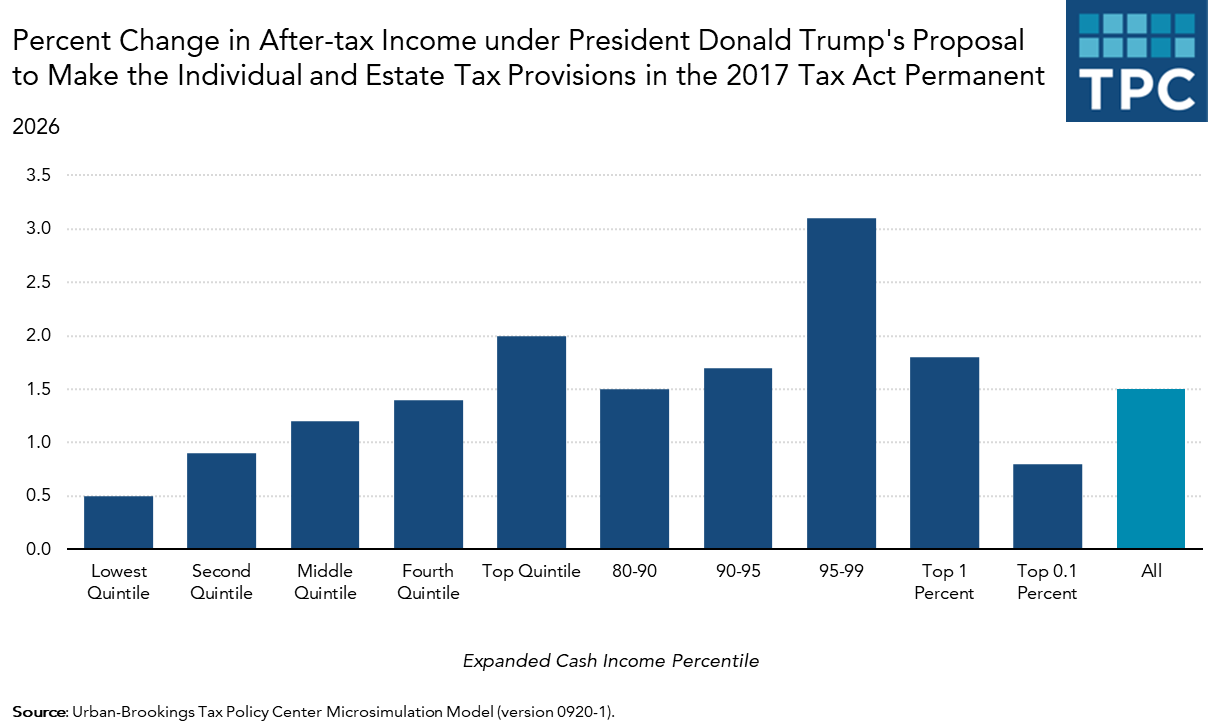 TPC included the following provisions in its analysis of extending the TCJA:

Because campaign representatives did not clarify provisions or specify more details, we were unable to estimate the effects of the following Trump campaign proposals:

Although TPC could not estimate the effects of those proposals, their impact is generally clear: They would reduce taxes for certain businesses. Combined with the 10-year, $1.1 trillion revenue loss from the TCJA continuation that TPC was able to model, they would result in a substantial tax cut at a time of historic budget deficits.