While the federal income tax system may appear “colorblind” or race-neutral to some, it can mitigate or exacerbate racial inequities. A new Government Accountability Office (GAO) report explains why better data is necessary to allow for a more complete understanding of the tax system’s impacts.

The IRS does not collect data on tax filers’ race and ethnicity, and other federal agencies do not routinely include these breakdowns in their tax analyses. But for years, scholarly books and papers have called attention to how the federal tax code and its administration might exacerbate long-standing racial disparities in housing, wealth, education, and employment.

Noting that an Executive Order from President Biden and various congressional hearings have prompted the Treasury Department and other federal agencies to seek more information, GAO discusses solutions to integrate tax and demographic data (see figure). 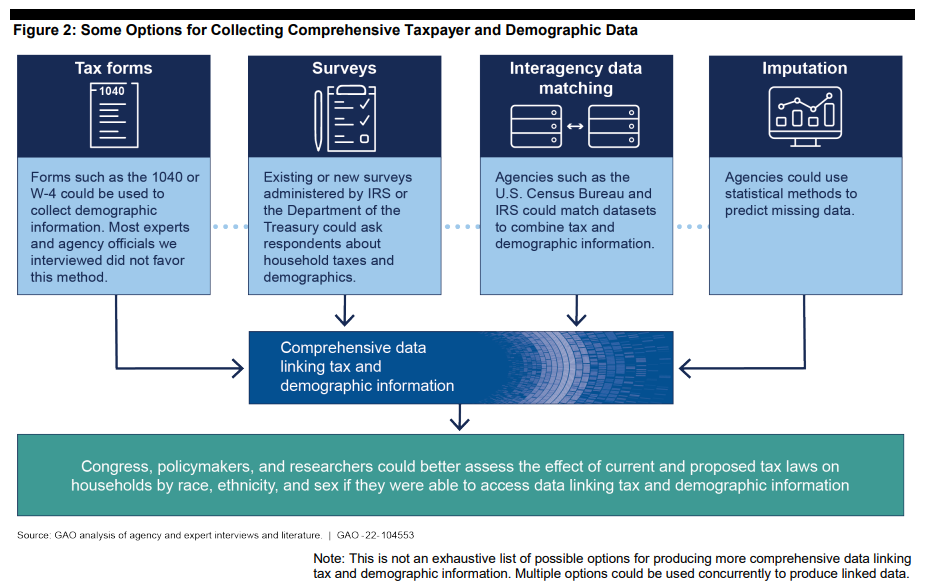 In its report, GAO highlights how the disconnect between tax and demographic data hampers analyses of tax provisions by race and ethnicity. Along with reviewing the literature and legal rules, GAO interviewed 21 tax law professors and tax policy researchers, as well as IRS, Treasury, and US Census Bureau officials.

GAO also used the Urban Institute’s Transfer Income Model (TRIM3) to examine what existing data suggest about relationships between federal tax provisions and income, sex, and race and ethnicity. For some tax provisions – such as the Earned Income Tax Credit and the Child Tax Credit – they found disparities in average credit amounts and eligibility that went beyond income variations.

Other examples reinforce the need for better data. For instance, the GAO breakdown of capital gains by household cannot fully account for some well-known racial disparities in sources of income and wealth. A lack of data by race and ethnicity undermines modeling who benefits from many large tax preferences affecting overall tax liabilities.

As GAO notes, Treasury has determined that the IRS is not permitted to collect demographic data by race and ethnicity under current law, unless necessary for tax administration. This distinguishes the IRS from several other federal agencies, such as the Social Security Administration, Federal Reserve Board, and the Department of Labor.

There are concerns that if the IRS were to collect this data in the future, through a survey for example, it could have “chilling effects” on voluntary compliance or lead to data misuse for tax audits (A 2019 ProPublica investigation discussed how audits may already disproportionately affect communities of color).

Instead, federal tax research offices insulated from the rest of IRS could use the Current Population Survey, American Community Survey, and Survey of Consumer Finances to match demographic information of respondents to taxpayer data. However, Treasury notes to GAO that titles 13 and 26 of the United States Code may limit the ability of the US Census Bureau and the IRS to share data.

For its part, Treasury’s Office of Tax Analysis is focused on developing and fine-tuning an imputation approach to estimate demographic characteristics of taxpayers without directly linking taxpayer information to any self-reported demographic information. TPC is also expanding our microsimulation model to estimate the distributional effects of tax policies by race and ethnicity (more on why this is challenging and what we are doing here).

Policymakers, tax administrators, researchers, and the general public would benefit from an improved understanding of how taxes intersect with issues of racial equity. Getting more and better data will be a first step in that path. The complexities with pursuing that step should not deter us from delving further.