Meet the new estimate of the American Health Care Act (AHCA).  It looks a lot like the old one.

On May 24, the Congressional Budget Office (CBO) released its estimate of the revised AHCA, which the House of Representatives passed on May 7.  The revised AHCA allows states to opt out of ACA requirements establishing essential health benefits and permits states establishing high-risk pools to allow insurers to set premiums based on health status.  The modified bill sets aside $8 billion to help subsidize these pools.

Like its predecessor, the revised AHCA has four distinct major components.

The chart below shows the tax changes (the first two major components mentioned) go almost entirely to the highest earning households, while providing little or no benefit to the bottom 80 percent of the income distribution.  In fact, TPC estimates that a $37,000 average annual tax cut will go to the 1 percent of the population with the highest earnings (annual income of over $772,000).  The top 0.1 percent of the income distribution would receive an annual tax cut of over $200,000 (annual income over $3.9 million).  (Note that this chart shows the estimates for 2022, but incorporates the tax law changes for 2023 as the AHCA phases in some of the tax changes). 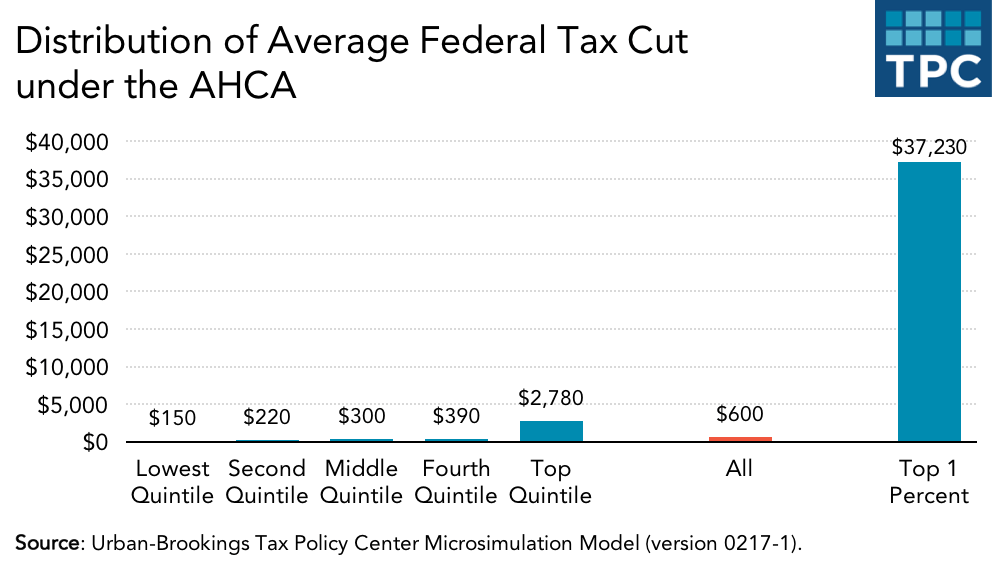 The bottom line: CBO estimates confirm the AHCA is largely a tax bill paired up with Medicaid cuts to offset the costs. And, as in the earlier version of the bill, almost all the benefits go to the highest income households in the country.