The House Democrats’ latest plan to adjust the cap on the state and local tax (SALT) deduction would provide little or no benefit for low and middle-income households but generate a substantial tax windfall for those with much higher incomes, according to a new analysis by the Tax Policy Center.

The latest plan would raise the cap from $10,000 to $72,500 for all filers starting this year, except married couples filing separately who each could deduct up to $36,250. Under current law, the $10,000 cap would expire in 2025, along with most other individual income tax provisions for the 2017 Tax Cuts and Jobs Act (TCJA).  The higher cap would remain in effect through 2031 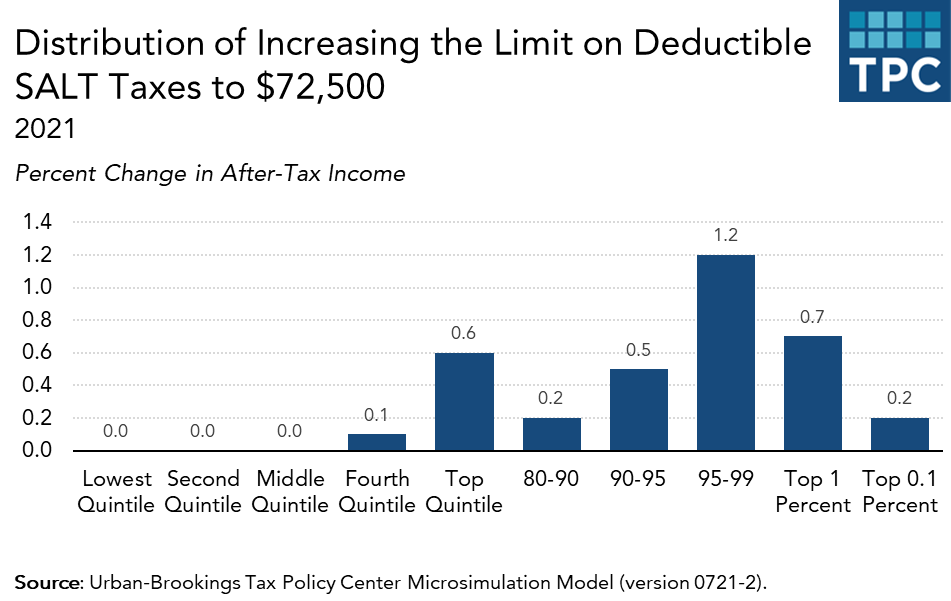 Because the highest income households likely still would owe state and local taxes that exceed the new cap, those households would receive a smaller average tax cut as a percentage of their income than those slightly lower in the income scale. For example, the top 0.1 percent (those making more than about $4 million this year) would get an average tax cut of about $16,000, but it would represent only about 0.2 percent of their after-tax income.

Few low- and middle-income tax filers would benefit from the proposal because they pay significantly less than $10,000 in state and local taxes. And the vast majority—currently more than 90 percent-- don’t even itemize their deductions and most would be unaffected by the increase in the cap. TPC estimates that only about 5 million more households would itemize as a result of the SALT proposal.

TPC analyzed the SALT cap fix only, relative to current law. In other words, its analysis of the effects of the change does not include any other provisions of the latest Build Back Better bill. Many of those would likely raise taxes on high income households and lower taxes on middle-income households starting in 2022.

However, there is one other downside to the plan: It likely would throw about a half million taxpayers back on the individual Alternative Minimum Tax, a levy that was largely repealed by the TCJA but still applies to those upper-middle income households whose deductions drive their effective tax rates to relatively low levels.

The plan also would likely have complex revenue effects. The cost of the higher cap from 2022 through 2025 would be partially reduced by other tax increases on very high-income households. Because the cap would expire under current law after 2025, the new cap would be scored as a tax increase in 2026 through 2031. There appears to be no offset to reduce the revenue loss in 2021.

Supporters of a SALT cap fix have struggled with a problem from the beginning of their effort: Almost every idea they’ve proposed would largely benefit high-income households and do little or nothing for those with moderate incomes. This proposal fails to effectively address that problem though earlier versions were worse.