Because the IRS does not ask for a tax filer’s race or ethnicity on tax forms, examining the relationship between race and the tax system is difficult. However, our new interactive feature explores how specific provisions of the individual income tax code can interact with existing racial inequities.

Federal income taxes are progressive, and help narrow racial after-tax income gaps by generally benefitting low-income families. But some tax policies can exacerbate income and wealth inequalities stemming from long-standing discrimination in areas such as housing, education, and employment.

Our feature allows you to follow the lines of the Form 1040 to learn more about major individual income tax provisions, how much they cost, and how they can have disparate impacts by race based on eligibility criteria, benefits, or tax liabilities.

Who benefits from tax breaks?

The federal income tax code subsidizes housing and homeownership through tax incentives such as the deduction for mortgage interest and the exclusion of a portion of realized capital gains from the sale of a home. These provisions largely benefit higher-income households and will cost the federal government more than $280 billion between 2019 and 2022.

But homeownership rates vary widely by race. A larger share of White households own their own homes compared with Asian, Black, or Hispanic households. If we consider monthly housing costs, Black, Hispanic, and Asian households are more likely to spend a large fraction of their income for housing, than White households. 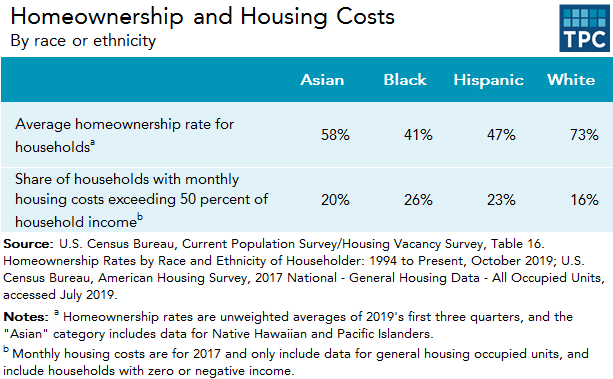 Why does this matter? Homeownership continues to be an important way to build wealth and financial mobility in the US, but households of color are significantly less likely to own their homes. For Black households in particular, the long history of redlining and segregation has had a profound impact on today's housing and wealth disparities. Thus, they benefit less as a group from tax subsidies for homeownership.

By contrast, the EITC has been particularly successful in helping narrow racial after-tax income gaps. It primarily benefits working parents with low and moderate incomes, among whom Black and Hispanic households are disproportionately represented. In fact, the EITC is an effective antipoverty measure across occupations, education levels, and geographic locations.

Many public policies are intentionally designed to ignore race and apply equally to all households. They are based on the idea that “racelessness” is a worthy public policy goal and will ultimately create opportunities for all, regardless of their race or ethnicity.

However, racial disparities are prevalent in society. This new feature can help show how the income tax system affects people differently by race and ethnicity, and where opportunities lie to reform policies and help narrow racial income and wealth gaps.