The Trump administration is focusing on infrastructure this week. In a series of events, the president and his staff will promote their $1 trillion investment plan, a proposal to privatize air traffic control, and other ideas for improving the nation's transportation and waterway systems. To help you keep up with the evolving debate, here are four facts (and charts) on Trump's plan, current infrastructure spending, and motor fuel taxes (both federal and state).

Trump will spend much of the week touting his $1 trillion plan to fix the nation's infrastructure. However, as outlined in his budget (and his campaign proposal), the plan does not call for $1 trillion in government spending. Instead, the federal government would provide $200 billion in tax credits to private investors to spur more public-private partnerships. The hope is private companies would then chip in the extra $800 billion in exchange for future cash flows. Public-private partnerships offer some benefits such as faster access to capital. However, they don’t work for all public projects, especially those that don't generate a revenue stream to repay investors such as roads that cannot be tolled or public facilities that cannot charge full costs for access. We also don't know how the projects would be selected and what (if any) role state and local governments would play. 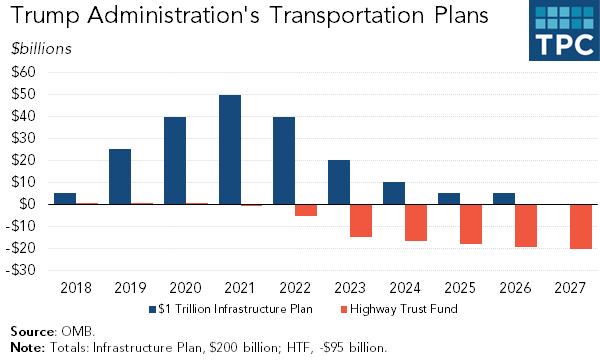 Furthermore, Trump’s budget includes several cuts to infrastructure spending, including a nearly $100 billion cut over 10 years to the Highway Trust Fund, which finances most federal spending on highways and mass transit. Overall, Trump’s budget would cut the Transportation Department by 12.7 percent.

2. The federal gas tax has not been increased since 1993

One thing the administration won't discuss this week is increasing the federal gas tax—despite the president seemingly endorsing the idea last month. The 18.4 cents per gallon tax, which traditionally provided nearly all funds for the Highway Trust Fund, was last increased in 1993. Twenty-five years of inaction has worn down the value of the tax in real dollars, which has forced Congress to pass transportation bills (the latest in 2015) that do not actually pay for much of their spending. 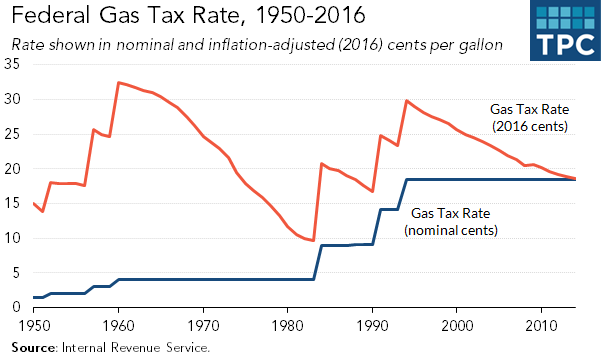 In part because the federal gas tax has not been raised in decades, real federal spending on infrastructure has stalled since the 1980s. As a result, state and local governments have increased their spending to keep up, and now provide three-quarters of the more than $400 billion in annual infrastructure dollars (two-thirds for transportation and the rest for waste and wastewater systems). This puts a lot of stress on state and local budgets that already face other fiscal pressures. Despite a desire for more infrastructure projects, from 2003 to 2014 total infrastructure spending declined in real dollars. 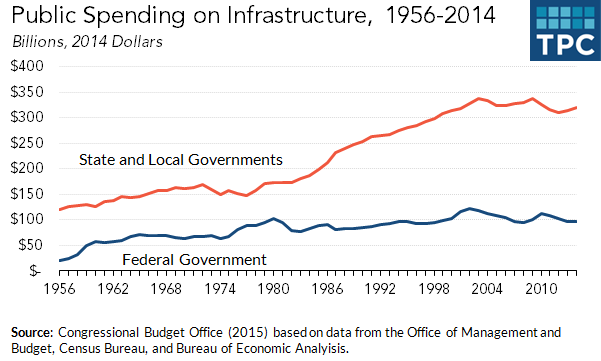 Just like the federal government, states fund most transportation projects with motor fuel taxes. And just like the federal government, raising the tax is politically difficult for states. Many states have gone decades without increasing their rate. However, faced with limited federal funds and ongoing demands for infrastructure improvements, some have acted in recent years. Between 2013 and 2016, 17 states raised motor fuel taxes, and five more—California, Indiana, Montana, South Carolina, and Tennessee—did so this year. But similar efforts failed in five other states: Alabama, Alaska, Minnesota, New Mexico, and Oklahoma. In short, even after some tax increases, most states still face a big imbalance between what they need or want to spend on infrastructure and what they can spend on infrastructure. And federal inaction only exacerbates state budget problems. 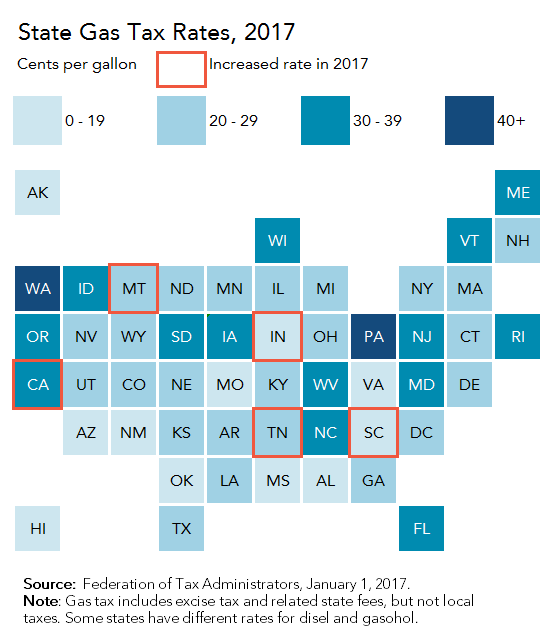