Despite the Tax Cuts and Jobs Act, the Federal Tax System is Becoming More Progressive Over Time

The Tax Policy Center’s newly released baseline tables tell a nuanced and somewhat paradoxical story. For over a decade, legislative changes and real income growth have combined to ensure that the US tax system became more progressive over time. Last year’s Tax Cuts and Jobs Act, however, interrupted that trend and made the tax code less progressive. However, the combination of economic growth and the expiration of the individual income tax provisions of the TCJA after 2025 means that the federal tax system will become moderately more progressive by end of the next decade. It should be noted, though, that the US tax system would be even more progressive by 2028 had the TCJA not been enacted.

The decline in the redistributive effect of the tax system between 2017 and 2018 was biggest for taxpayers in the 95th-99th percentiles (.21 percent) largely because the TCJA largely eliminated the individual alternative minimum tax and created a new 20 percent tax deduction for income from pass-through businesses such as partnerships and sole proprietorships.

Between 2018 and 2028, however, TPC projections show the federal tax system gradually becoming more redistributive.  By 2028, the tax law will increase the share of after-tax income received by the bottom two quintiles by more than in 2018 and reduce the share received by the 95-99th percentiles by less. There is almost no change over the decade in the effect of the tax law on income shares for both the middle quintile and the top 1 percent. This increase in progressivity would have been much greater had it not been for TCJA, which provides 83 percent of its benefits to the top 1 percent in 2027. 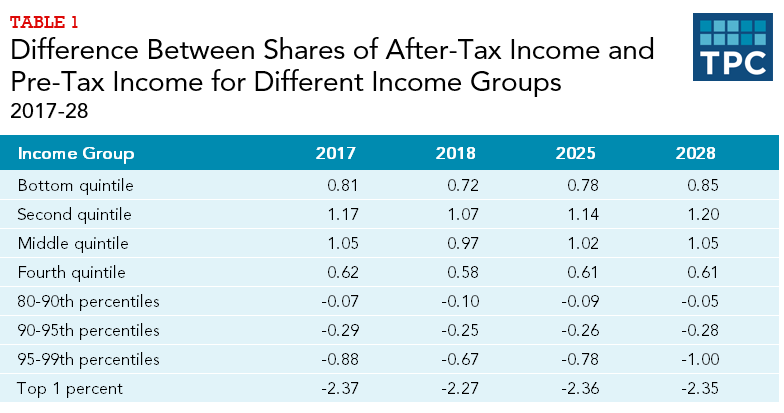 The biggest reason for this increased redistribution is the gradual rise in overall average tax rates, which makes a progressive system redistribute income more even when the shares of incomes and taxes paid among income groups do not change.

TPC’s estimates of the effects of TCJA compared the new tax law with a pre-TCJA baseline. However, because both the baseline law average tax rates and pre-tax incomes are themselves changing over time, the tax system will become slightly more redistributive through 2028 even though TCJA makes it less progressive than under pre-TCJA law. The main exception is for the top 1 percent, where the long-term benefits of the corporate tax cuts in TCJA offset the effects of baseline changes.

Note finally that these estimates assume most of the TCJA’s individual income tax cuts will expire and new tax increases will be implemented as scheduled. If the individual tax cuts or other expiring provisions are extended, the story could be very different. And the findings do not suggest that the current system is progressive enough. Because of the long-term growth in income inequality, we might want an even more progressive tax system. What is true, however, is that over time the system is becoming gradually more, not less, progressive.