Extending The TCJA Would Cut Revenue By $3.8 Trillion Through 2038, Mostly Benefit The Well-Off

The House Republican plan to make permanent the individual income and estate tax provisions of the Tax Cuts and Jobs Act (TCJA) would add almost $3.8 trillion to the federal budget deficit from 2026-2038, according to a new estimate by the Tax Policy Center.  Even after taking into account macroeconomic effects, the bill would cut taxes by nearly $3.6 trillion over the period.

The bill, expected to be approved tomorrow by the House Ways & Means Committee, would cut taxes by an average of $1,600 per household in 2026, boosting average after-tax incomes by 1.6 percent. Under current law, most individual income tax provisions and the estate tax cuts of the TCJA are scheduled to expire at the end of 2025.

TPC estimated the revenue and distributional effects of only the “Protecting Family and Small Business Tax Cuts Act of 2018” (PFSBTCA). It has not yet estimated the effects of two much smaller companion bills.

The measure would cut taxes by about $640 billion from 2019-2028, though effectively all of those reductions would occur in the three years from 2026-2028. Over the following full decade, tax revenues would fall by $3.2 trillion.  Taking into account the economic effects, the bill would cut tax revenue by about $570 billion in the first three years and by nearly $3 trillion over the next 10 years. 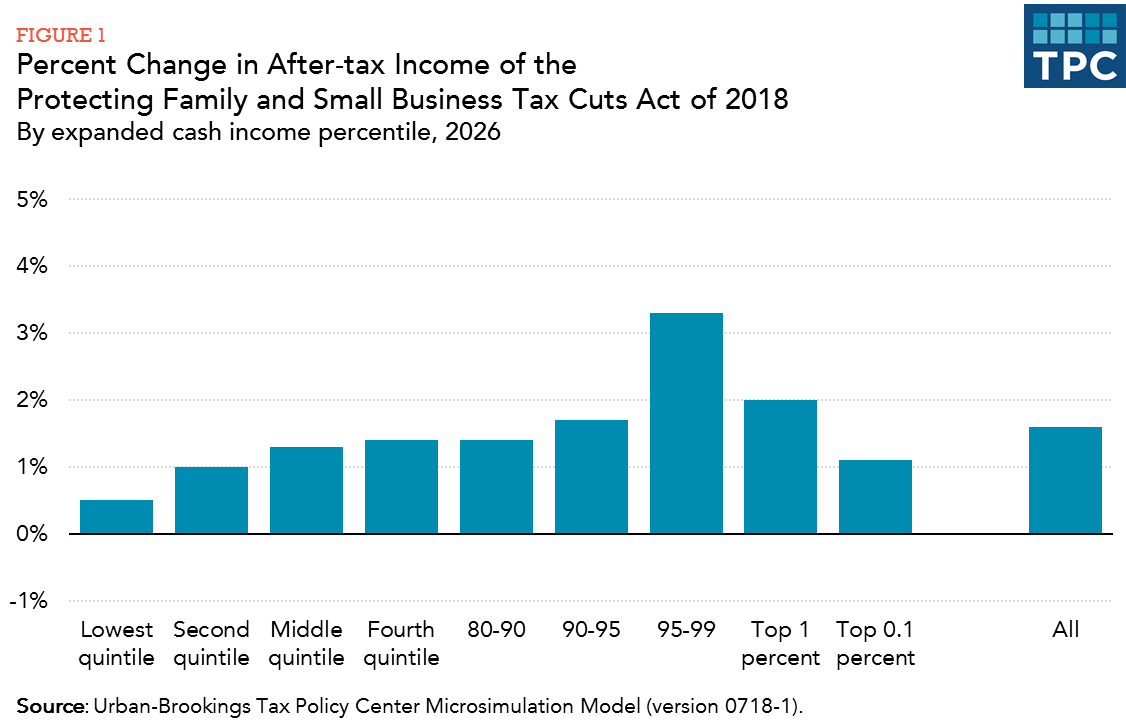 PFSBTCA would be somewhat less generous than the TCJA for the highest-income households because it extends only the individual and estate tax provisions of the 2017 law. The TCJA’s corporate tax cuts, which overwhelmingly benefited high-income households, were permanent and thus already are built into the current law baseline.

While households in every income group would get a tax cut—on average—not all taxpayers would benefit. TPC estimates that about two-thirds of households would get a tax cut while 9 percent would pay more under the bill and about one-quarter would pay roughly the same federal income tax as under today’s law. Among those paying higher taxes, the average tax increase will be about $3,800. The main reasons why people would pay more under the PFSBTCA: The continued repeal of personal exemptions and extending the TCJA’s cap on the state and local tax (SALT) deduction.

Extending the individual tax cuts would increase incentives for work and savings. Those benefits would be offset by higher interest rates but, on net, would result in a modest increase in economic output. That somewhat higher output from 2026-2028 would occur primarily due to increased incentives to work from lower marginal tax rates on labor income and from increased demand for goods and services. However, those effects would diminish over time as deficits crowd out increasing amounts of capital. Overall, slightly higher output would reduce the bill’s revenue loss by only about 5 percent.

The bill to extend the TCJA’s individual and estate tax cuts has the same structural flaws as the original. It is an enormous budget-buster that primarily benefits high-income households. This bill has no chance of receiving the 60 votes it needs to pass the Senate, and may not even get through the House. But when Congress does get around to extending the individual tax cuts—as it likely will down the road-- one hopes it will do so in a more fiscally responsible and better targeted way.