Build Back Better 2.0 Still Raises Taxes For High Income Households And Reduces Them For Others

In a new analysis, the Tax Policy Center estimates that the major tax changes in the latest version of President Biden’s Build Back Better plan would cut taxes on average for nearly  all income groups in 2022. The exception: Those in the top 1 percent, who will make about $885,000 or more. They’d pay about $55,000 more than under current law. Those in the top 0.1 percent, who make about $4 million and up, would pay an additional $585,000 on average, a 5.9 percent reduction in their after-tax income.

Looking only at direct taxes—individual income taxes and payroll taxes—the plan also would cut 2022 taxes on average for every income group except those in the top 1 percent.  The highest-income households would face roughly the same increase in direct taxes in 2022 as they would with all major provisions. 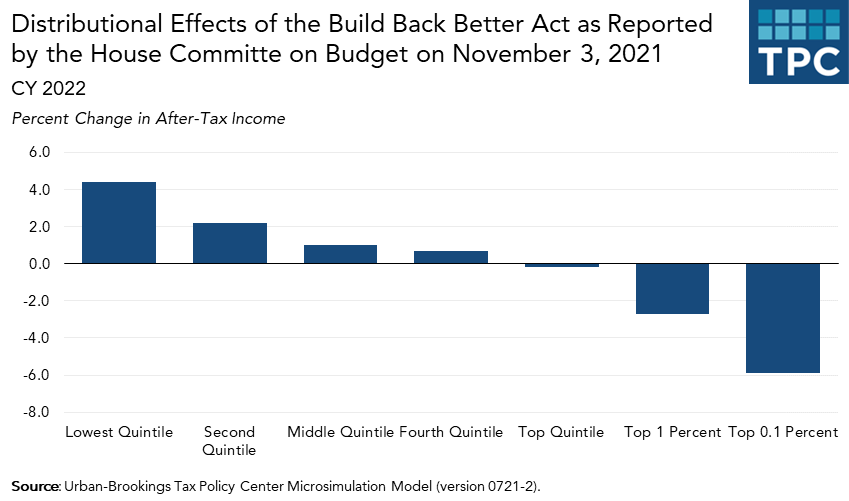 Looking at direct taxes only, fewer than 0.1 percent of those making $500,000 or less would pay more in taxes than under current law. A proposed increase in the nicotine tax that TPC did not incude as a direct tax could boost that share slightly.

The picture would change somewhat in 2023. Among the reasons: The bill would extend the 2021 expansions of the Child Tax Credit (CTC) for 2022 only. In addition, one of the major tax increases in the bill, the corporate minimum tax on book income, isn’t scheduled to take effect until 2023. TPC allocates corporate taxes to households, as investors and workers.

The story would change again in 2026. All of the individual income tax provisions of the 2017 Tax Cuts and Jobs Act currently are scheduled to expire at the end of 2025. Households also would be affected by the bill’s proposed revisions in the state and local tax (SALT) deduction cap. Finally, there would be significant changes in revenues collected from multinational corporations.

The plan TPC analyzed would boost the annual cap on the SALT deduction to $80,000 from 2021 through 2030 and restore the $10,000 cap for 2031. But because the cap would expire completely after 2025 under current law, very high-income households that pay large amounts of state and local tax would pay more in taxes with a $80,000 cap after 2025 than they would if the SALT cap completely disappeared.

Due to these and other issues, when all major tax provisions of the BBB bill are included, every income group except those making about $28,000 or less would pay higher taxes on average in 2026 than under current law. However, the tax increases for middle income households would be very small, only about $70 on average. The top 1 percent would pay about $100,000 more.

Looking at direct taxes only, the story would be quite different. Almost no households making $500,000 or less would pay higher taxes in 2026. However, the top 0.1 percent would pay an average of about $700,000 more than under current law.

TPC’s analysis comes with several caveats. It generally is based on the proposal that the congressional Joint Committee on Taxation analyzed on Nov. 4, though it includes the proposal to increase the SALT deduction cap to $80,000 (rather than the $72,500 cap in an earlier version).

Finally, analyzing the House Democrats’ plan is especially complicated because the effective dates of its many tax provisions vary widely. While TPC usually tries to show the effects of tax bills for a year when all tax changes are fully effective, there is no year when all of the BBB provisions would apply.

While the latest version of Biden’s signature initiative drops or revises many of his original proposals, it still reflects one key goal: It would raise taxes on high income households and corporations while reducing, or at least not raising, taxes for the vast majority of low- and moderate-income households.