Did Republicans make a political mistake rushing the Tax Cuts and Jobs Act (TCJA) through Congress in less than two months in late 2017? In a fascinating new paper, my Tax Policy Center colleague Vanessa Williamson suggests they did: Not only did the fast track make for a poorly crafted law, the timing may have short-circuited any electoral benefits of the tax cuts. Vanessa, an expert in public opinion about taxes, concludes that the TCJA’s short-term economic effects are too small and too poorly timed to translate into votes for congressional Republicans this November.

Politically speaking, Vanessa argues, the TCJA was deeply flawed. This seems counter-intuitive. After all,  tax cuts are considered a bedrock issue for Republicans that helps turn out base voters in off-year elections when participation is low.

Yet she makes a convincing case that with the TCJA, at least, conventional wisdom is wrong. By passing a tax cut 11 months in advance of a congressional election and doing so without taking the time to build public support for the law, Republicans may have seriously miscalculated.

The GOP wanted to rush the bill through for several reasons. President Trump and Hill GOP leaders wanted a big, quick political win to offset their failure to “repeal and replace” the Affordable Care Act. They wanted a tax bill passed before critics could build opposition to key provisions. And they wanted the bill enacted into law in time for the 2018 tax year. Their twin bet: Voters would respond positively to reduced withholding and higher take-home pay and the stimulative effects of the tax cuts would begin to show up in the US economy in time for the 2018 elections.

Vanessa argues that these calculations were wrong in several respects. As a result, the GOP never did generate much public support for the TCJA. 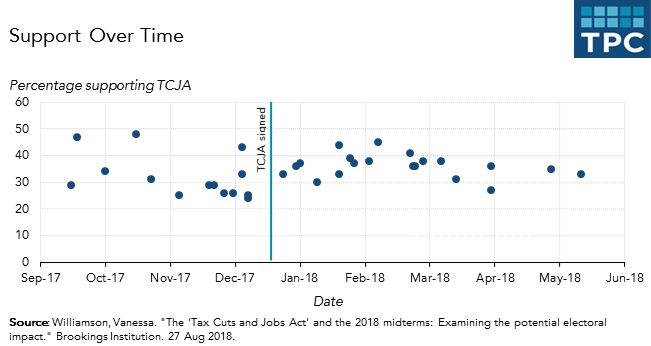 First, their basic economic and political assumptions were misguided. Because the tax cuts were relatively small for many voters, they were unlikely to notice the increase in take-home pay. TPC estimates that middle-income voters will get an average tax cut of about $900 this year, or less than $20 per week.

The bill’s supporters also failed to recognize that, when it comes to tax cuts, Americans have notoriously short memories. As Vanessa reminds us, a year after Congress passed President George W. Bush’s tax cuts, only one in five voters remembered they had benefited from the changes (in reality, three-quarters got a tax cut). A year after President Obama’s 2008-2009 tax cuts, only 10 percent thought their taxes had been reduced--though about eight in 10 paid less.

In short, the TCJA is unlikely to help the GOP much in November because voters simply will have forgotten about its benefits by the time they vote.

What about the effects of the tax cuts on the overall economy? Some early evidence suggests that the TCJA  and big spending increases approved by Congress this year have resulted in modest additional short-term economic growth.  And, as Vanessa notes, “the state of the economy is a good-but-not-perfect predictor of the incumbent party’s re-election chances.” But here the rub: While the correlation works in presidential elections, “there is no relationship between the nation’s growth rate and Senate (or House) seat loss.”

Worse for the GOP, the TCJA itself suffers from a lack of voter enthusiasm. Last year, taxes never were a top priority for many voters. Even while Congress was debating the bill, less than 2 percent of the public called taxes the biggest issue facing the country. To make matters worse, Vanessa writes, most voters—even Republicans—believed that taxes for corporations and high-income households should not be cut. Yet the new law did just the opposite.

Because most voters in today’s hyper-partisan atmosphere take their cues from own party leaders, the GOP might have been able to boost enthusiasm for the bill among grassroots Republicans. But that would have taken time, and by rushing the measure through Congress, Republicans lost the opportunity.

Remarkably, Vanessa found that the 32 percent public support for the TCJA in the weeks before its passage was lower than public approval for some recent federal tax increases.

Support for the new law peaked in the mid-40s last February, following an intense marketing campaign by the White House (which aggressively promoted anecdotal evidence of post-TCJA raises and bonuses) and a multi-million dollar effort by GOP-connected advocacy groups.

But that backing proved evanescent, and public support for the TCJA has slipped back to roughly 30 percent. While the partisan gap remains wide (about 70 percent of Republicans support the new law compared to one-in-ten Democrats), even GOP backing seems to have plateaued.

Could Democrats seize on the TCJA as a campaign issue much as Republicans did with the ACA? Perhaps, Vanessa suggests, but it would require a much more aggressive effort than Democrats are making. Thus, the issue seems just to be slipping off this year’s political radar screen.

Vanessa argues that passing the TCJA may have one longer-term political plus: It satisfied the demands of the Republican donor class, which did benefit from the TCJA. That, she says, could pay off in more campaign contributions down the road.

Would the political benefits of the new law been greater if Trump and Congress slowed down the process? Would the bill even have passed if critics had time to pick it apart? We’ll never know.

But, as Vanessa, convincingly argues, the rush job has so far generated little political advantage for GOP candidates running this fall.