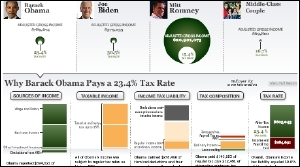 Why Romney and Obama Pay the Taxes They Pay

By now, many readers of TaxVox know how much Barack Obama and Mitt Romney pay in taxes. But true tax wonks are more interested in why the candidates paid what they paid. A new infographic from the Tax Policy Center tells that story. 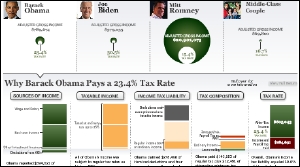 The interactive display of the president’s and Romney’s (preliminary) 2011 tax returns walks readers through each return to show the sources of income, how income from each source is taxed, the components of the candidates’ income and payroll tax bills, and their effective tax rates. We also toss in Vice President Biden’s return as well as one for a typical middle-class couple with children. All four returns are joint filings by the married couples.

The results are interesting, if not surprising. The president’s 2011 income came in almost equal parts from his White House job and his book royalties. The Obamas claimed itemized deductions totaling 37 percent of their adjusted gross income (AGI)—mostly for charitable contributions—and ended up paying 19 percent of their AGI in income taxes and another 4.4 percent for combined employee-employer payroll taxes.

Mitt Romney’s taxes are another story. More than half of his 2011 income was long-term capital gains and qualified dividends that face a reduced 15 percent tax rate. His itemized deductions reduced the amount of his income subject to ordinary rates by 60 percent. Bottom line: an income tax bill equal to 15.4 percent of his AGI—a percentage point higher than his 2010 rate. And because so little of his income was from working, his payroll tax rate was just 0.6 percent of AGI.

Our typical middle-class married couple paid a slightly higher federal tax rate than the Romneys: 16.7 percent of their $70,000 AGI for income and payroll taxes (again both employer and employee shares). But the breakdown of taxes was very different for the two families: Our typical family paid just a 3.5 percent income tax rate but a 13.3 percent payroll tax rate because virtually all their income came from wages.

Vice President Biden offers yet another situation: Both he and his wife worked and paid payroll taxes. Social Security benefits and a pension boosted them into the next-to-top tax bracket and they had relatively few deductions—just 18 percent of their AGI. That left them paying 22.9 percent of their AGI in income tax and another 7.5 percent in payroll taxes—roughly the same as the Obamas but significantly higher than the Romneys.

Note that these calculations leave out other taxes that all four taxpayers might pay: corporate income tax, excise taxes, and state and local taxes. Including those levies could change the four stories substantially.

Overall the U.S. federal tax system is highly progressive. As a group, high-income households pay much larger shares of their income than those with low incomes pay. But within each group, where income comes from can yield sharply different tax rates. Check out the infographic and see how that works for the candidates.