Donald Trump’s tax and spending plan could nearly triple interest rates and increase the federal government’s debt by $14 trillion by 2026, according to an estimate by Mark Zandi and his colleagues at Moody’s Analytics. In 2018, the federal government could be paying more than $900 billion in interest—nearly twice what it pays today. By 2026, it could be paying more than $1.8 trillion in debt service, 50 percent more than under current fiscal policy.

Zandi primarily looked at the effects of Trump’s plan on the overall economy. And it would be bad: His economic policy would throw the country into a recession by early 2018 and dampen growth over the next decade. But let’s just focus on what it could mean for interest rates and the federal debt.

The heart of Trump’s plan is his rewrite of the federal tax code. In December, the Tax Policy Center estimated his proposal would reduce federal revenues by $9.5 trillion over 10 years, and by nearly $1.2 trillion in 2026 alone. TPC assumed that, if not offset by spending cuts, Trump’s plan would add $1.7 trillion in interest costs over the decade--$385 billion in 2026—assuming no change in interest rates. So far, Trump has not specified spending reductions beyond his promises to cut “waste, fraud, and abuse” eliminate a few modest federal pograms, and cap the federal share of Medicaid.

Zandi and his colleagues looked at Trump's tax and spending plans, as well as his proposed immigration and trade policies. They assumed Congress would reduce planned spending by about $1.5 trillion over 10 years. Still, the Trump plan would result in a big bump in borrowing. And Zandi found those higher deficits would drive up rates significantly.

Let’s look at the yield on the benchmark 10-year Treasury bonds. This morning, 10-year Treasuries were yielding about 1.68 percent. Moody’s projects they’ll average about 2.4 percent for all of 2016 and about 3.6 percent in 2017, assuming no change in fiscal policy (remember the Fed has signaled plans to slowly ratchet up rates). 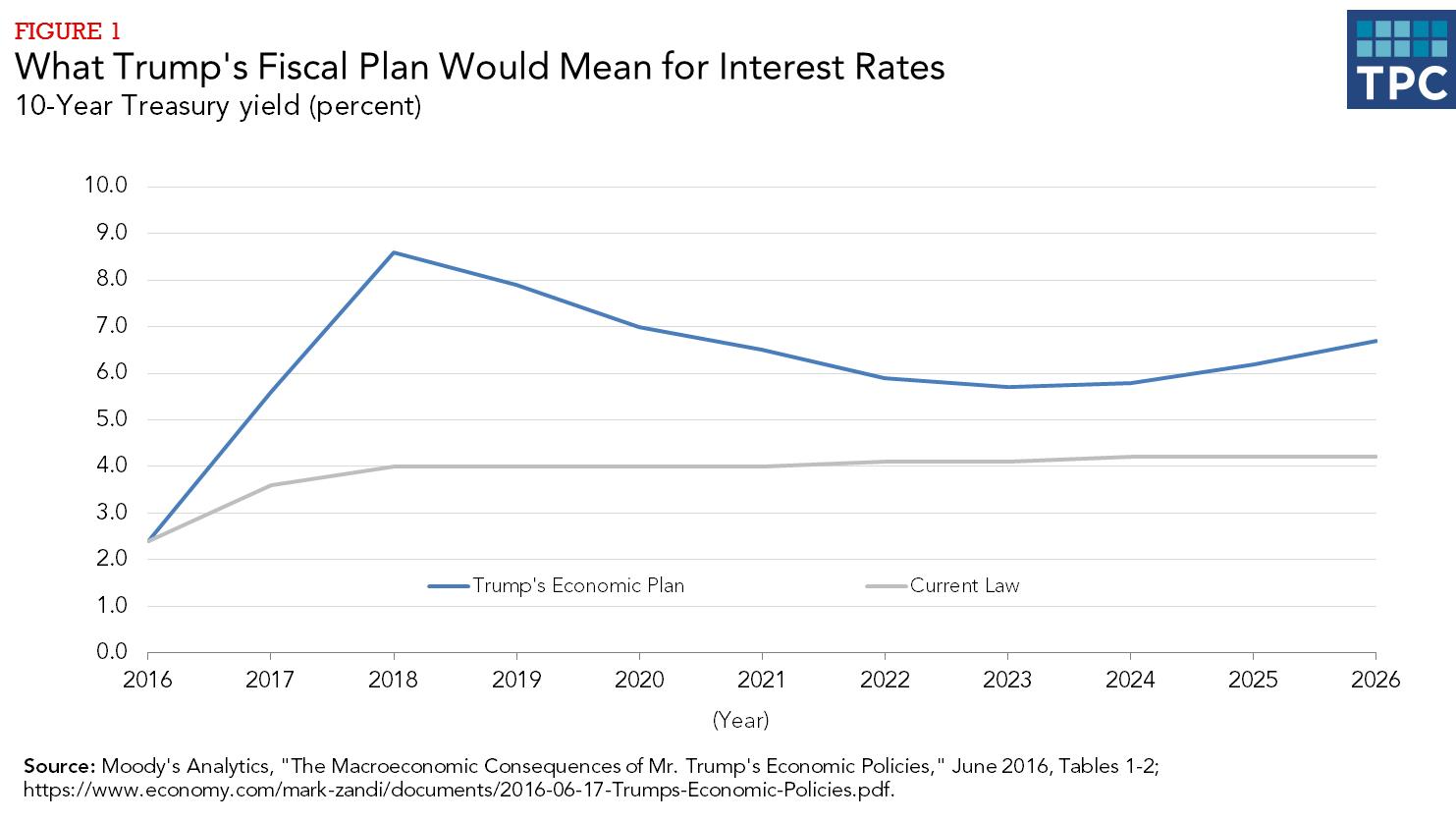 Not surprisingly, Zandi projected that the toxic combination of higher borrowing costs and more debt would sharply increase federal interest payments. They’d balloon from $494 billion this year to $931 billion in 2018-- $125 billion more than Moody’s projects under current law. By 2026, Treasury would be paying $1.8 trillion in interest on its debt, one-third more than under current law.

Interest would become the federal government’s single biggest expense, 2.5 times spending for national defense, $550 billion more than Medicare, and $200 billion more than Social Security.  Interest payments would consume 6.7 percent of the nation’s total economic output, and one quarter of all government spending.

In the end, those higher rates would result in some combination of higher taxes and fewer government programs. But that’s not all. They’d also drive up the cost of private money. Businesses would have to spend more to acquire equipment, and households would pay more to borrow for a new house or car.

Trump’s plan would cut taxes significantly for nearly everyone. TPC estimated the average tax cut in 2017 would top $5,000. But higher interest rates would eat up most of those tax savings—and many families may pay more in interest than they’d save in taxes.