TPC: The Ways & Means Reconciliation Bill Would Raise Taxes On High Income Households, Cut Taxes On Average For Nearly Everyone Else

All major provisions of the House Ways & Means Committee’s budget reconciliation tax bill would cut 2022 taxes on average for households making $200,000 or less. At the same time, the bill would raise taxes substantially for those making $1 million or more, according to a new analysis by the Tax Policy Center.

The bill’s individual income, payroll, and estate tax provisions alone, however, would cut taxes on average for households making $500,000 or less while still increasing them significantly for the highest income households.

As a result of the individual income, payroll, and estate tax changes, only a handful of households making $500,000 or less would pay more in taxes in 2022 than under current law. However, including all major provisions, including corporate income and excise tax increases, about 58 percent of all households and nearly 80 percent of households making between $200,000 and $500,000 would pay more. About two-thirds of those making between $100,000 and $200,000 would face somewhat higher tax bills—about $650 on average. 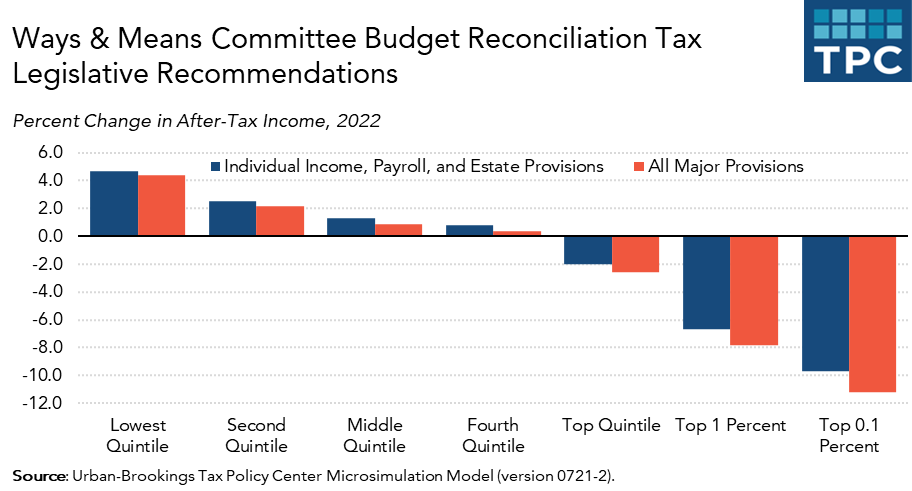 Among its key provisions, the bill would:

Who gets a tax cut?

Because so many of the Ways & Means tax cuts are focused on low- and moderate-income families with children, those parents would get much bigger tax cuts. Excluding corporate and excise tax hikes, the lowest income parents would receive a tax cut (or a direct payment) of about $3,700 while middle-income households would get about $3,000.

Overall, middle-income people—those making between about $54,000 and $97,000—would enjoy a modest tax cut. Including their share of corporate income taxes and excise taxes, their federal taxes would fall by an average of about $630. Looking only at individual income, payroll, and estate taxes, their tax bill would fall by about $840 on average.

TPC, like the Joint Committee on Taxation and the Congressional Budget Office, allocates corporate income taxes among shareholders, owners of other capital, and workers. Corporate tax increases would modestly lower the after-tax incomes of workers, whose wages would be a bit lower than under current law.

President Biden regularly promises that no households making $400,000 or less would pay more in taxes under a Democratic tax bill than under current law. TPC does not break out income groups into $400,000 or less, but it does look at those making between $200,000 and $500,000.

By that measure, looking at individual income taxes, payroll taxes, and estate taxes, effectively no households making less than $200,000 would pay higher taxes. And 99.4 percent of those making between $200,000 and $500,000 would avoid a tax increase. About one-third of that group would get a tax cut averaging about $1,500 and 0.6 percent would pay an average of about $50,000 more, mostly due to increases in the estate tax.

The Ways & Means bill is one step towards a major 2021 tax bill. It dropped or scaled back some key provisions of Biden’s campaign agenda. But at 30,000 feet, it roughly tracks the president’s wish list.