A new study by my Urban Institute colleagues Greg Acs and Kevin Werner shows that, in a typical year, the expanded CTC would reduce child poverty from 14.2 percent to 8.4 percent nationally – a reduction of over 40 percent. Child poverty would remain above 10 percent in only three states – California, Florida, and Texas. In 11 states, it would be reduced by 50 percent or more. That means 4.3 million fewer children would be in poverty in a typical year.

Here are selected changes in child poverty rates in a typical year if the 2021 CTC is extended. 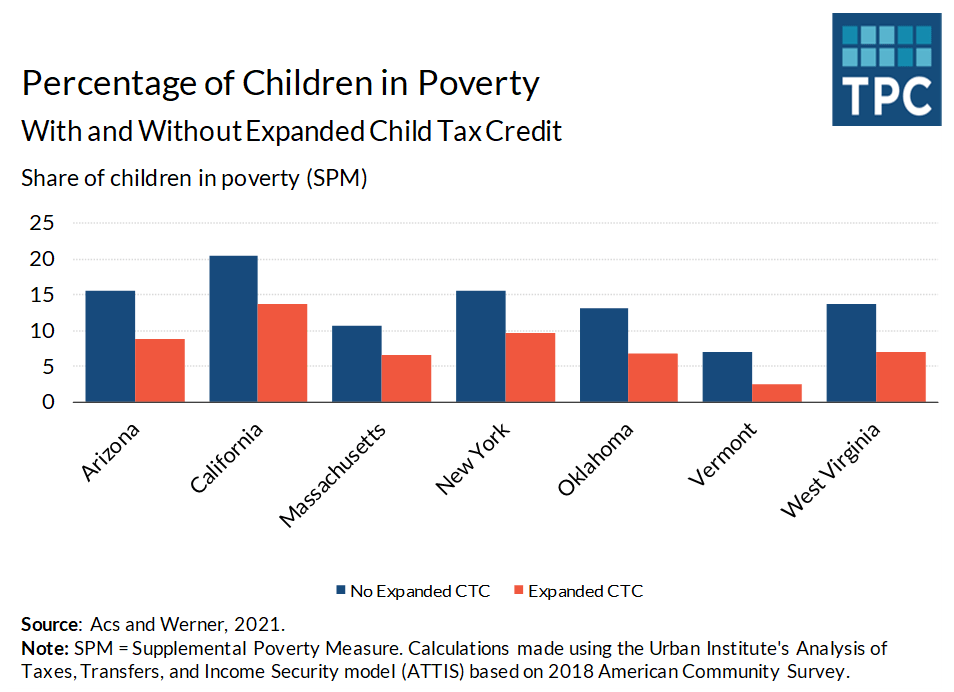 But states with larger populations would see more children affected by the policy. For example, although the percentage drop is relatively modest in California, more children would be lifted out of poverty there than in any other state.

Congress made three major changes to the CTC this year. It made the credit fully refundable so that even very low-income families can receive the maximum benefit. It raised the maximum credit from $2,000 to $3,000 for each child age 6 to 17 and $3,600 for children under age 6. And it extended the credit to families with children who are age 17. Of these changes, full refundability is the most effective at reducing poverty.

A wealth of research shows lifting children out of poverty can confer a lifetime of benefits. Children who do not grow up in poverty are more likely to do better in school, graduate from high school, and attend college – and they are less likely to receive public benefits in the future. Moreover, their health is better, they’re less likely to be engaged in criminal activity, and they live longer.

The temporary expansion of the CTC, along with other measures taken during the pandemic, will lead to a significant decline in child poverty this year. But extending the ARP’s changes to the CTC – particularly making the credit fully refundable – would result in a more permanent change in the well-being of children and their families.