While the share of households paying no federal income tax will increase, nearly all those households will continue to pay some taxes— whether federal payroll taxes, federal excise taxes, or state taxes.

The large percentage of people who don’t owe federal income tax is a feature, not a bug, of the revenue code. By design, the federal income tax always has excluded a significant fraction of households through a combination of personal exemptions, the standard deduction, zero bracket amounts, and more recently, tax credits.

Passage of the TCJA was the main cause of the 2 percentage point jump in non-payers of the federal income tax. The law’s increase in the standard deduction and its expansion of the Child Tax Credit (CTC) were the main drivers of this result. However, the effects of those changes were dampened somewhat by the elimination of personal exemptions.

The fraction of non-income-tax-payers grew for those in all but the top quintile, and by the largest amount (3 percentage points) among middle-income households.

In 1913, when the modern income tax was established, very few people paid federal income taxes. The original personal exemption for married couples was $4,000, roughly $100,000 in today’s dollars. The exemption dropped to $2,000 in 1917 (about $25,000 today) but a new $200 exemption for dependents was added. The exemption was further reduced during World War II, increasing the number of households paying the income tax to help fund the war effort. After WW II, the exemption amount declined steadily in real terms until it was indexed for inflation starting in 1985 and ultimately eliminated in 2018 by the TCJA. This decline was offset first by the introduction of the standard deduction and, later, by new tax credits largely for low- and middle-income families with children, such as the Earned Income Tax Credit (EITC) and the CTC. 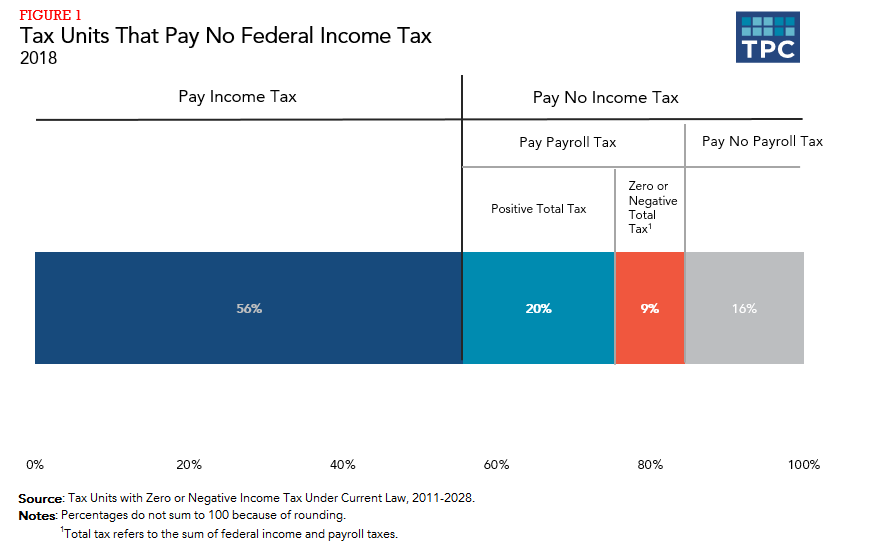 Refundable credits (e.g., EITC, CTC) make it possible for some low-income parents who workers to have no net combined income and payroll taxes. These tax credits help prevent many households from being taxed into poverty.